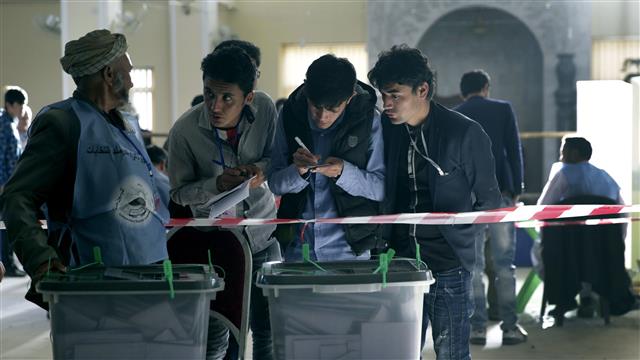 The Afghan Parliamentary Elections was held on 20th and 21st of October where despite countless security challenges, hundreds of thousands of Afghans attending the polling stations in order to cast votes for their favorite candidates in the entire country, except for two provinces.

After the voting process, President Ashraf Ghani praised the process through a message, and thanked the people for their participation saying: “through voting, you have shown the world that you do not want violence with your entire force, you have expressed your will and you have not surrendered to force.”

Despite security threats and direct threats of Taliban, disorder in the commission (IEC) work, interference of strongmen, and different kinds of fraudulent activities polling stations were among the problems for which the people and observer organs in the process complained.

The analysis discusses the holding of Parliamentary Elections and the challenges in the electoral process and voting system.

Holding Parliamentary Elections was one of the promises of the National Unity Government (NUG) which finally was met, overcoming several political disputes and confrontations, followed by a delay of 3 years, and despite feared security problems and challenges.

Around 4 million people have participated in the Parliamentary Elections in entire country, except for Ghazni and Kandahar, where they voted for 2570 candidates of Wolesi Jirga (House of the People in Afghan Parliament), according to Afghan Independent Elections Commission (IEC).

Ex-President Hamid Karzai told Voice of America that: “the current Afghan situation was not suitable for holding elections and it would be good if the Parliamentary Elections were held along with or after the upcoming Presidential Elections.” Meanwhile, President Ashraf Ghani has praised holding the elections and called it an important step towards democracy maintenance. Abdullah Abdullah, Chief Executive of Afghanistan has also called holding the Parliamentary Elections a step forward and a great achievement adding that: ”the biometric of voters is however, a positive step toward electoral transparency; but there were insufficiencies that the government, electoral commissions, observer organization and the international community are responsible for resolving.”

Two days prior to the Election Day, Taliban released a statement calling it an American process and conspiracy in an effort to hinder people  from participating in the process; however, the people, despite threats and assaults of the Armed Opposition Group (AOG), participated in the process and casted votes for their favored candidates.

Although the Afghan government deployed 66 thousand military personal in order to maintain security for the electoral process; as the Ministry of Interior (MOI) reports, 192 security incidents took place where 36 civilians and military personnel were killed and 120 others wounded. On the other hand, the Taliban claimed they had carried out more than 400 attacks on election days which had resulted in killing and injury of tens of people.

Disorder and Fraud in Elections

Though the Parliamentary Elections were held after a 3-year postponement, fraudulence and disorder remained part of the elections. More than 5000 complaints was registered in the Afghan Independent Electoral Complaints Commission (IECC) during the two days of elections which reflected the widespread corruption and fraud in the process.

The following points are worth mentioning regarding disorder and problems during the election days:

Following media reports, it is seen that strongmen and a number of local military commanders had interfered in the process in some polling stations, and had filled the voting boxes for the sake of interests of their favored candidates, especially those that were located in provinces.

Although there remained opposition to holding Parliamentary Elections due to unsuitable conditions in the country and confrontations of political parties as the elections were coming closer, the widespread national and international criticism on the illegal extension of the term of Wolesi Jirga for 3 years had forced the Afghan government in to holding elections with all of its deficiencies, threats and challenges.

Since insecurity and lack of the government’s control over the entire Afghan territory had caused lagging delay in general and inclusive Parliamentary Elections, the people had participated in the elections and voted for their favored candidate despite security problems and threats. From the very beginning of the electoral process and especially on the Election Day, the Taliban attacked several polling stations including those that were located in Capital Kabul which resulted in death and injury of tens of civilians.

Considering the fact that while tens of civilian casualties took place during the electoral process, and people continued going to polling stations accepting the threats of death, requires that transparency and justice be maintained when it comes to dealing with electoral fraud in order for ensuring efficiency and for the people’s vote to be respected. Thousands of complaints have been lodged to IECC regarding law-breaking and fraud in the electoral process, and therefore, the IECC is required to take action impartially and realistically.

Thus, if the electoral commission especially the IECC, does not take care of the complaints regarding the fraud, disorder and strongmen’s interference in the electoral process and does not separate clean votes from unclean ones, and deals with the issue by discriminating, it would on the one hand bring the legitimacy of the elections into question and  other hand would definitely have negative impacts on the trust of Afghan people in the electoral process.