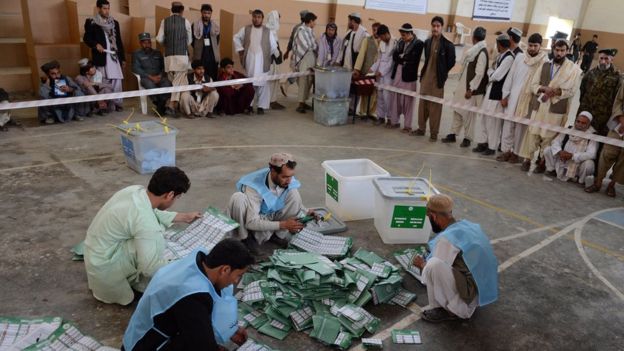 Parliamentary Elections for the 17th legislative term had been held in the entire countries except for Kandahar and Ghazni on October 20-21, 2018. Although, the elections became held in Kandahar after a week from that date; however, they the elections will be held in Ghazni simultaneous to the Presidential Elections there.

Afghan Independent Elections Commission (IEC), at first, however, said that the primary results of the elections will be announced on November 10, 2018 and the final results will be announced on December 20, 2018; but the IEC postponed the announcement of primary results for the Parliamentary Elections for two other weeks. Following the suspension, concerns and suspicions over fraud in the IEC and some secret political deals had become emerged.

The following topics are discussed here; technical and operational problems in the electoral process, suspicions and concerns over secret political deals and frauds, the characteristics of members of parliaments (MPs) for the 17th legislative term and the impacts of Parliamentary Elections on the upcoming Presidential Elections.

Technical and Operational problems in elections

The Parliamentary Elections became held after a delay of 3 years while were accompanied by insecurity, which prevented a large number of Afghans to cast vote, as well as full disorder and fraud.

The technical and operational problems in the elections were as following:

First; remarkable number of people participated in the elections in Kabul and other areas of the country that had rather good security situation; however, the management weakness of IEC was a big problems in those areas. Most of the polling stations became opened late on the Election Day which resulted in extension of elections to the second day. The voter’s lists were transferred from a site to other which caused in deprivation of votes from casting vote due to lack of their names in the voter’s lists. The biometric machines were not working well and the people were did not know about its usage either which had encountered the process with challenges.

Second; disorder and vast fraud on the Election Day have concerned the Electoral Watch institutions. Based on information receive by Center for Strategic and Regional Steadies (CSRS), boxes full of votes have been reached to the IEC headquarters from some areas where there were not polling stations opened. For example, seven thousand votes have been casted by a commander in favor of a specific candidate in Tala Wo Barfak district of Kunduz province where no one had casted vote there. 3,500 votes have been counted from two villages in Jaghato district of Wardak province where there was no polling station opened and no one had casted their vote. Similarly, votes have been sold out, the voting boxes have become filled by local strongmen and commanders in favor of specific candidates and even the boxes have become filled in the IEC offices in favor of a specific candidate citing the areas where people were not able to cast vote due to insecurity or where the electoral materials were sent in full.

After the voting boxes returned to the IEC provincial offices, and then, to the headquarters, the observers, once again, raised their voice over interference in the results; and as the results are not announced for months, it emerges suspicions over corruption and fraud in the process.

Based on CSRS resources, interferences have been made in tallying process of vote in favor of specific candidates. Someone’s votes get increased and some others get decreased. Most of the candidates’ observers complain that the number of votes they counted in the polling stations are not the same tallied by IEC. Moreover, they say that boxes’ code numbers they noted are changed now and it appears that fraud has been made there.

Based on our information, deals are weighing from 500,000 USD to one and a half million US dollars in order for the candidates to enter the Parliament. The situation has concerned the candidates having the people support only, not the money.

Besides that, there are rumors that the Afghan Presidential Palace (ARG) has also made efforts in order to have some of its favorite candidates to enter the Parliament and, then, to work in favor of the present team in the upcoming Presidential Elections.

Who will enter the Parliament?

There were more than 2,500 candidates in the Parliamentary Elections that were attached to different strata and ideologies; however, the CSRS analysts believe that the following category of people will rather have higher chances to enter the Parliament:

First; that will be committed to US and government’s interests in the future as the government does not want to have an adverse parliament against it;

Third; strongmen, plutocrats or businessmen; as they will try to enter the Parliament by any mean in order to gain political support for protecting and increasing their wealth.

Fourth; a number of patriot and loyal individuals will also enter the Parliament who wishes to represent their people and serve the country without pursuing any personal interests.

Holding Parliamentary Elections after a delay of 3 years and with such a great scope of disorder and fraud illustrates the weak management and low capacity of the Independent Election Commission (IEC). The people trust is the IEC and the process has got enfeebled due to the existed problems. If the IEC postponed the announcement of Parliamentary Elections’ results, it would emerge serious concerns over fraud in there which will badly hit the trust in the upcoming Presidential Elections.

Despite all security threats, which causes in killing and injury of tens of people due to explosions and assaults carried out by AOG, the people attended the polling stations and casted their votes in the Parliamentary Elections; but if their sacrifices are not respected by the IEC and their sacred votes are mixed with unclean votes, it will be cruelty from one hand; and from other hand, it will cause the people to not believe in IEC again and to not come out of their homes in such inappropriate circumstance from their homes for the sake of casting their votes.