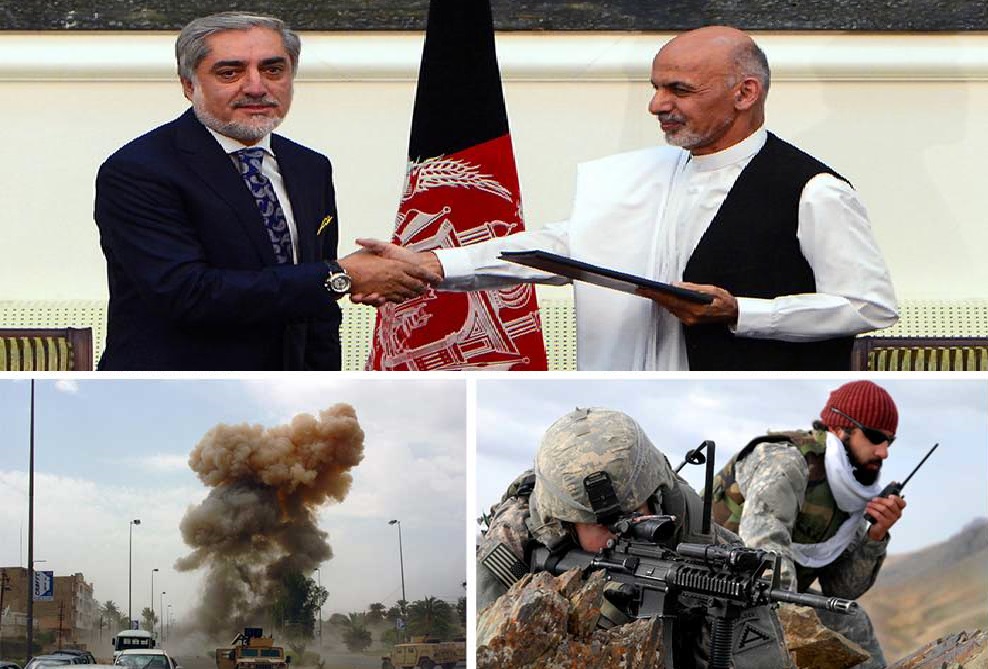 President Ghani took the office in September 2014 while military and security responsibilities were handed to Afghan forces by international forces and a large portion of foreign forces deployed in Afghanistan had withdrew the country and their number was decreased by 15000 for overall 130 thousand foreign soldiers in Afghanistan.

After Ghani took office as the President of Afghanistan, the mission of foreign forces turned in to advising and training Afghan forces only and thus the Afghan battlefield was handed to Afghan military forces only which resulted in high casualties of Afghan forces and further flaming of the war.

The topics on battlefield condition in last four years, civilian casualties in the period and reasons behind further severity in Afghan security conditions are discussed here.

Although there was poor security situation during the formation of National Unity Government (NUG); however, the condition became deteriorated after the NUG begun its work. The war geography expanded from south to north and the war became severe in Northern provinces in compare to past.

During the Ghani Administration, the Taliban became as powerful as to extend their battle to the domains of big cities and to have more focus on aggressive assaults in their war strategy. Following the trend, Kunduz was the first city captured by Taliban during NUG after their collapse in 2001. Meanwhile, Farah and Ghazni cities were also became under control of Taliban for a few days during the NUG.

Khurasan branch of the Islamic State (ISIS-K) or Daesh also became emerged at the beginning of NUG and expanded its activities during NUG to the status where they were able to carry out bloody attack in capital Kabul and other big cities of the country, and it is, now, considered a big threat toward Afghan security.

Lack of taking care of civilian lives by parties involved in the Afghan war is a great concern and a most detestable aspect of the war. Targeting civilians and killing children and women has been turned into a usual job in last 17 years done by parties involved in the war. More than 10 thousand civilians have been killed and injured every years after the NUG became established in 2014, according the statistics provided by international institutions.

Despite increase in civilian causalities, there was also a rise in military casualties during the NUG as well. Five thousand Afghan security forces had been killed and 15 thousand others had become injured during 2015, according to SIGAR. Its previous reports indicate that 6,785 Afghan security forces became killed and 11,777 others became wounded from January 1st to November 12th of 2016. However, the number was much higher in 2017. The latest SIGAR report writes that 2,531 Afghan soldiers became killed and 4,238 others became wounded only from 1 January – 8 May, 2017.

Deadly and blind air strikes of foreign and Afghan forces have become killed and wounded hundreds of civilians, and sometimes Afghan security forces, during the Ghani Administration. The strikes have been increased by multiple times after signing the Bilateral Security Agreement between Kabul – Washington (BSA) and, then, the announcement of new US military strategy for Afghanistan that have, in several cases, targeted the civilians. Based on reports, the US forces have carried out 2,611 strikes in Afghanistan in 2017; in the case, the number was 1,071 in 2016 and 236 in 2015; however, the National Unity Government (NUG) has always kept its silence over these incidents.

The following points are noteworthy in this regard:

First; after the emerge of ISIS-K in Afghanistan and US insistence over having presence in the region has interrupted the regional and international consensus over the Afghan issue that has made the regional countries to be suspicious about US goals in the region. Therefore, the Afghan war is getting complicated day by day and apparently, the confrontations between US and Russia points out to a “New Cold War” going-on between great powers in the region and, hence, Afghanistan is turned into of its main battlegrounds.

Second; the structure of National Unity Government and political disputes among the state leaders are considered as the main reasons behind constitution of insecurity and security crisis in Afghanistan. The trend has caused in lack of effective work for peace and putting an end to war, especially the civilians casualties deprived from blind airstrikes.

Third; weakness and corruption in the government’s military institutions are one of the reasons that have resulted in deteriorated security situation and severity in the Afghan war. Even the water and bread of Afghan forces become stolen due to existence of corruption in the security institutions and ranks of Afghan forces. The negative inclinations has resulted in some Afghan security forces to get dissatisfied and, in some case, to even join the ranks of the Armed Opposition Group (AOG) and fight against the government.

Fourth; poverty and unemployment are among the challenges that ground the people to join the AOG ranks. The issue has got severed during the NUG year by year. Based on the World Bank report, approximately 40 per cent of Afghan people are living under the poverty line and almost 24 per cent of the Afghan workforce is unemployed. Following the circumstances, more youth are inclined to do theft, murder and pick up the weapons that, in return, have important role in interrupting security, severity in war and increase in crimes.