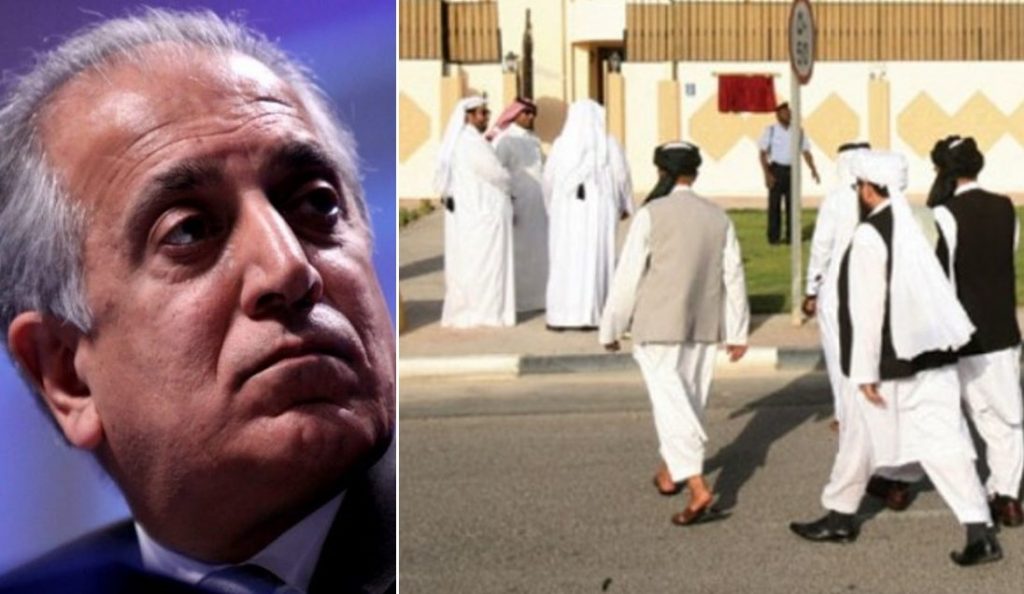 The special envoy of US Department of State for Afghan peace, Zalmay Khalilzad concluded a second visit to the region, including Afghanistan, after the latest meeting on Afghan peace in Moscow. Zalmay had met the Taliban officials in Qatar during the visit as well.

After his Qatar visits, Zalmay arrived in Kabul last week where he told the reporters that he is convoluted in talks with entire involved parties including the Afghan government and the Taliban for the sake of bringing peace in Afghanistan; however, it is yet to declare any important development. He hoped a peace deal would be reached with Taliban.

The topics on Khalilzad’s new mission for putting an end to the 17-year long on-going war in Afghanistan, hopes for peace maintenance, and challenges towards the Afghan peace are discussed here.

After 17 years of bloody war in Afghanistan, the United States has, ultimately, realized that the Afghan war could not be won through military pressure and their on-going war in Afghanistan had reached to an impasse. Thus, it has chosen the way of initiating direct talks with the Taliban since last few months.

For this purpose, two months ago, the United States appointed Zalmay Khalilzad to lead the Afghan peace process and make efforts for having peace talks with the Taliban and to reach an agreement in this regard. Khalilzad is an Afghan-American politician who had, meanwhile, got adequate information on the Afghan culture, social life, languages and politics as well as he has got a significant experience of working with and consulting the four US Presidents on Afghan issues.

He started his visits from Afghanistan where he met Afghan President and Chief Executive, and number of Afghan politicians and Jihadi leaders sequentially. Moreover, he flew to Islamabad after Kabul where he held meetings with Pakistani officials on Afghan peace and asked for their cooperation in the Afghan peace. Besides Pakistan, Zalmay Khalizad had visits to Saudi Arabia, UAE and Qatar as well.

As a result of these efforts, direct talks took place between Taliban authorities and US representatives which, in return, emerged new hopes on the Afghan peace. Hence, some of important Taliban officials were released from prison in Pakistan as fruit of these talks. Additionally, the five Taliban officials that had been released from the Guantanamo prison also joined the Taliban political office in Qatar in order to take part in the peace talks.

Later, Khalilzad realized his second visit to the region including Afghanistan where he, in Kabul, told reporters that he hopes for success of the peace talks with Taliban. Based on Western media reports, there are rumors that the Taliban have talked with Khalilzad on some issues like presence of foreign forces, timetable for withdrawal of Americans, release of Taliban officials from prison, armistice and establishment an interim government.

For the first time, the United States expressed readiness for direct talks with Taliban in order to put an end to the Afghan on-going war after having fought for 17 years. The US has appointed an Afghanistan-born American politician to lead the mission, and thus, it is considered as the most important and hopeful action toward bringing peace and putting an end to the on-going war in Afghanistan.

Furthermore, the Taliban optimism regarding talks with US and demanding for continuation of the talks are the points that have brought hopes for success of peace talks with themselves. Likewise, meetings of political and jihadi parties with Khalilzad and the Taliban remarks mentioning that they want to talks with political parties instead of the Afghan government are also considered as themes that emerge hope for reaching to peace.

Taliban, in the Moscow meeting, said that they will not have any problems with Afghans if foreigners withdraw the country and they will solve the entire problems through talks. Such remakes emerge hopes for inter-Afghan dialogue and thus, it is anticipated that the Taliban will, then, reach an agreement with other domestic Afghan parties through talks.

Despite all what have been said, Zalmay Kahlilzad’s remarks with reporters in Kabul where he said the he hopes for success of peace talks with the Taliban is, in person, a green light which escalates the hopes of Afghans for having peace in their country. In the meantime, the Trump presidential term is getting closer to come to the end; and thus, there are analyses that, for the sake of reaching victory in the upcoming Presidential Election, he will try to put an end to the US war in Afghanistan, which is considered as the longest war of US in its history.

Although efforts on Afghan peace are folded in recent months; however, there is a lot of hope that the peace talks with Taliban will reach a positive conclusion; but there are some challenges towards the process, and important of them are listed as following:

Second; the position and stand of the Afghan government in these talks is also another challenge in the issue. The condition of the Taliban is that they will not talk to the Afghan government and hence, the United States stepped in. But on the other hand, the Afghan government has always emphasized on inter-Afghan dialogue and does not want to be marginalized. Therefore, the Afghan Presidential Palace (ARG) has started struggles to create a group under the banner of “Peace Consultation Group” on the Afghan peace process which will be comprised of representatives of political parties, civil society organizations (CSOs), women’s organizations and local councils of entire 34 provinces. The establishment of the board brings the existence of the Afghan High Peace Council (HPC) from one hand; and from the other hand, establishment of such boards can be called nothing except the repetition of unsuccessful experiences of HPC and creating delays in and barriers in front of the on-going talks.

Third; the establishment of an interim government and, then, the form of the government after the probable peace agreement is another problem that might challenge the possible peace deal. Because the Taliban always demand for an Islamic Emirate, and some circles inside the Afghan government counts the democratic system and some other changes as their achievements and, thus, they do not want to lose those “achievements”. However, those who challenge the peace process under the banner of achievements are the people that directly ask for continuation of the current bloody situation and it is needed to raise voice against these circles.