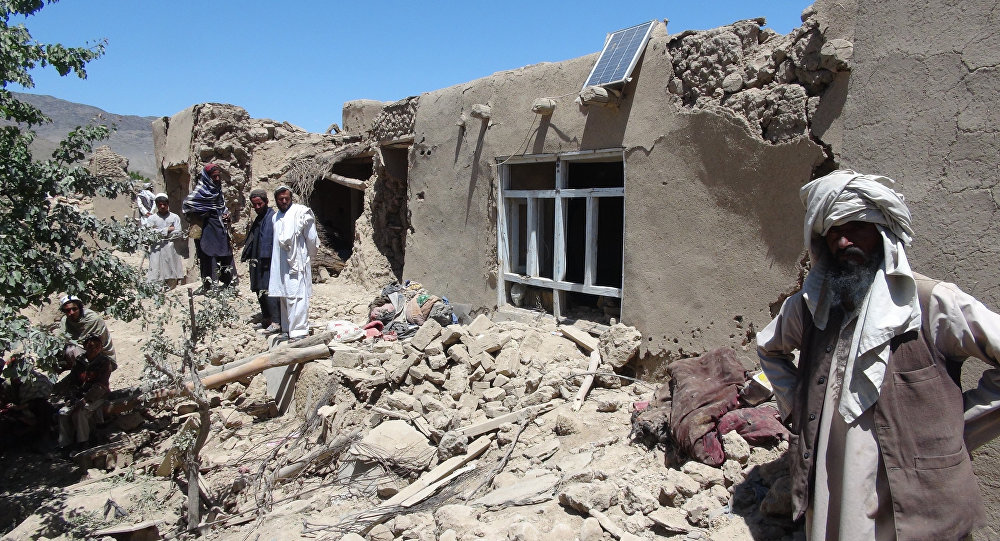 The US Air Forces (USAF) have dropped approximately six thousand bombs on Afghan soil this year, which is considered to be the highest number in the last ten years, according to USAF.

The murdering incidents of civilians have raised the harsh reactions of National Assembly and ordinary Afghanis; but there is, unfortunately, no ear to listen to them. Members of Parliament (MPs) say that the carelessness of Afghan government towards killings of Afghan civilians has hit the peak and deadly air and land strikes against Afghan civilians by Afghan and foreign security forces have been continuing.

Nevertheless, the peace talks have been reached a hopeful stage in last few months for the first time in past one and a half decade; and it seems that for the purpose of increasing pressure on the Taliban, civilians are being sacrificed to a great extent.

Intensification in air bombardments, inattentiveness towards the lives of civilians and the consequences of the on-going situation are discussed here.

Since UNAMA started to record the number of civilian casualties in 2007, totally 84246 civilians have been killed and injured by the parties involved in war till the end of 2017, according to UNAMA statistics.

In 2014, after formation of National Unity Government (NUG), the Bilateral Security Agreement (BSA) became signed with the United States for the sake of security and peace in Afghanistan; but, unlikely, the war got intensified and the civilian casualties got increased. According to UNAMA, approximately ten thousand civilians have suffered casualties every year since the NUG formed, and overall, the situation is being deteriorated as the battlefield turns into furnace, which it signposts a catastrophe in Afghanistan.

Institutions observing civilian causalities, to a large extent, relegate the burden of civilians causalities in Afghanistan on Armed Opposition Group (AOG); nonetheless, besides AOG, Afghan and foreign forces are important elements behind civilian causalities, which, considerably, goes unheeded in these reports. Civilian houses, madrasas, masjids, funerals, ceremonies and other civilian gatherings are targeted by blind foreign forces’ air bombardments time to time which have resulted in thousands of Afghan civilian casualties in last few years.

Upsurge in Airstrikes on Civilians

Overall, air bombardments have been increased in Afghanistan since the announcement of new US military strategy for Afghan and South Asia; however, civilians have been mostly targeted by these bombardments in the last few weeks.

Last week (December 2, 2018), eight civilians including women and children became killed and four other became wounded as a result of Afghan and foreign forces’ joint operations in Paktia province of Afghanistan. Before that, civilians became targeted by bombardments of Afghan and foreign forces in Helmand province, which caused in murder of 23 civilians including women and children as UNAMA confirmed; however, the international media reported the number to be 30. Similarly, about 15 civilians had suffered casualties due to joint operations in Logar and Ghazni provinces.

Air bombardments play vital role and is considered as an important factor when it comes to civilian causalities, in the case, 5982 bombs have been dropped for the purpose of crushing the AOG by the US since January 2018 to last day of October 2018; however, the outcome was to keep the war heating and to have the civilians to suffer further casualties. The trend has not got any positive upshot because winning the Afghan war through military pressure is something that has not been effective for the last 17 years and can be called as the repetition of past unsuccessful experiences only.

Despite air bombardments and AOG assaults, some mysterious explosions and attacks are another factor behind civilian causalities. The bloody attack on the birthday ceremonial of Prophet Mohammad in Kabul which claimed the lives of tens civilian is the latest example of such attacks.

Notwithstanding, it can be said that lack of paying attention to war principles, blind bombardments and terrorizing the people by the parties involved in the on-going Afghan war are the things that have paved the way toward upturn in the civilian casualties.

For the purpose of putting an end to the on-going Afghan war, recent direct talks between Taliban and the United States and the steps directly taken by US in this regard have emerged hopes among Afghans on having the on-going war ended as well as to be living in a peaceful Afghanistan.

As, however, it seems, US and Taliban want to put pressure on each other in the battlefield during the talks on Afghan peace in order to attain more privileges during talks through showing their clout to each other; but, the trend has concluded in harm to civilians.

In recent times, the Afghan government and foreigners have increased their bombardment and night raids on Taliban and, in return, the Taliban have augmented their grand focus on battlefield and explosions, whose latest remarkable attack was on G4S British Company which claimed the lives of 10 persons including four foreigners and wounded of 27 others. Though, the civilian causalities have unprecedentedly increased attributable to these pressures and, in participle, the houses of local people are being directly targeted by Afghan and foreign forces join air operations.

Regrettably, Afghan government has always been silent over civilian casualties during Afghan and foreign forces’ operations and is yet to take make any serious intervention despite widespread public objections in this regard. The act could increase distance between ordinary Afghans and the government and could, even, make some enraged Afghans to join the ranks of the AOG and take weapon against the Afghan government. And, it is something called as one the important reasons behind strengthening the ranks of AOG.