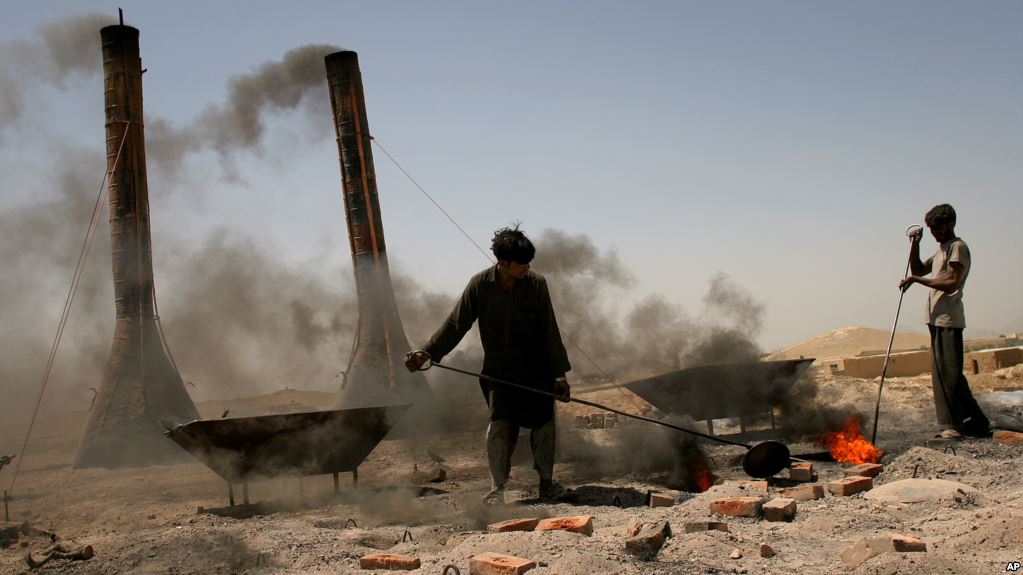 On December 15, 2018, Air Visual, a US-based air quality monitor, called Kabul as the most polluted city in the world. While having 353 points of US Air Quality Index (US AQI) at December 15 (and 363 points on December 29), Kabul was among the first ten most polluted cities of world which was followed by Pakistan’s Lahore , Magnolia’s Ulaanbaatar  and Bangladesh’s Dhaka City.

In a country like Afghanistan where tens are losing their lives on daily basis due to war and insecurity, air pollution is an extra problem that causes tens of Afghans to visit healthcare centers..

Air pollution in Kabul city made the Afghan Ministry of Labor and Social Affairs (MOLSAMD) and the National Environmental Protection Agency (NEPA) to publish a joint statement for the purpose of preventing air pollution and decreasing traffic in Kabul City, where they changed the working hours of public organizations. The statement specifies that from December 26, 2018 onwards, working hours of 14 ministries and 8 independent commissions will be from 08:30 AM to 04:30 PM and the working hours for rest of the governmental ministries and offices will be from 07:30 AM to 03:30 PM.

This analysis focuses on upsurge in world’s air pollution and as well as in Kabul city and the reasons behind its rise and the possible preventive strategies.

Nine out of ten people worldwide breathe polluted air, according to World Health Organization (WHO). Less developed countries of Africa and Asia are most vulnerable to the challenge.

WHO estimates that around 7 million people die every year from exposure to fine particles in polluted air that penetrate deep into the lungs and cardiovascular system, causing diseases including stroke, heart disease, lung cancer, chronic obstructive pulmonary diseases and respiratory infections, including pneumonia.

Therefore, air pollution is one of the major global challenges against the lives of organisms that exterminates millions of them annually; and if necessary attention is not paid to the improve of air quality, the transportation system, increase in fuel quality and use of electronic vehicles worldwide, the enemy will take the lives of millions of other human beings.

Kabul; One of the Most Polluted Cities of Globe

Afghanistan is a country with high mountains and rivers full of water as well as a beautiful and diverse nature; however, war and insecurity in the country have deprived the lovely people of Afghanistan from the stunning and unpolluted nature in most parts of the country and, thus, they have swarmed on cities, especially Kabul, the capital city of Afghanistan.

Based on studies, Kabul is suitable for a population of one and a half million; however, currently it is home for approximately six million residents. The congestion of population has resulted in the air of the city to turn into the main killer of the dwellers, as hundreds of citizens are oblige to visit hospitals because of the polluted air on a daily basis.

The most vulnerable people from air pollution are the poor and indigent people of the society that are even not safe from the polluted air inside their rooms and homes; and thus, they are exposed to various pulmonary diseases and respiratory infections, including pneumonia as they use poor-quality materials for heating and are not equipped for the cold weather of winter. However, what are the main reasons behind air pollution in Kabul?

Following are some of the points worth mentioning:

Density of Population: Kabul is the most populated city of Afghanistan where around six million people are living. The large population, itself, is one of the main reasons behind air pollution in Kabul because it results to high number of vehicles and increased consumption of fuel.

Low-Quality Fuel: consuming coal, petroleum products, wood and others in factoriesand for heating homes, , especially in winter is an important factor behind air pollution in Kabul city. Poverty has caused shortage of standardized material and consumption of cheap and low-quality goodsfor cooking and heatingwhich result in air pollution.

Unpaved Roads: Unpaved roads and streets of Kabul are another main reason behind air pollution in the city. After 2001, billions of dollars of foreign aid was donated to Afghanistan but was spoiled because of high rate of corruption and low capacity in the government institutions and by passage of 17 years, the roads and streets of the city are still not asphalted which causes air pollution.

Drought: Lack of rain in the recent years in Afghanistan, especially in Kabul City, has also contributed in an increase in air pollution. Lack of rainfall has caused in degradation of vegetation cover and and increase in dust in the city.

Poor Governance of Responsible Government Institutions: Lack ofadequate mechanism for standardization of Kabul City and absence of effective and practical strategies for fighting against pollution has caused excess in air pollution and the responsible government institution not to respond to it.

Strategies for Fighting Against Air Pollution

First: Public awareness on harms caused by air pollution and encouraging the public to take part in preventing the pollution is an effective mean in order to fight air pollution.

Currently, the Afghan government has declared Thursday as holiday in Kabul city and and has changed working hours for government ministries in order to reduce air pollution. Although these measures are effective to some extent, Afghan government needs to work on factors that result in reduction of air pollution and entire prevention in long term. For instance, taking the manufacturing factories away from the residential area; oversight on fuel consumption, collecting old vehicles that are still operating in the city and adopting a proper mechanism for collecting solid and other kinds of waste from the city.

Third: Supplying reliable and sustainable electricity to all citizens in order To give an environment-friendly option for cooking and heating instead of using polluting fuel.

Generally, air pollution is undoubtedly a global challenge and its rate in a specific area shows level of richness of culture of societies and the development of service delivery and brings thoughts and understandings about the governmental bodies and people of that specific geographic area.

The problem of air pollution is not affecting specific individuals or institutions in an area, its harms are affecting every one. Hence, every individual should contribute to efforts in reduction of air pollution and without putting the burden on others and wasting time and resources in blaming others, we all need to struggle for our health and protection of our families and environment.