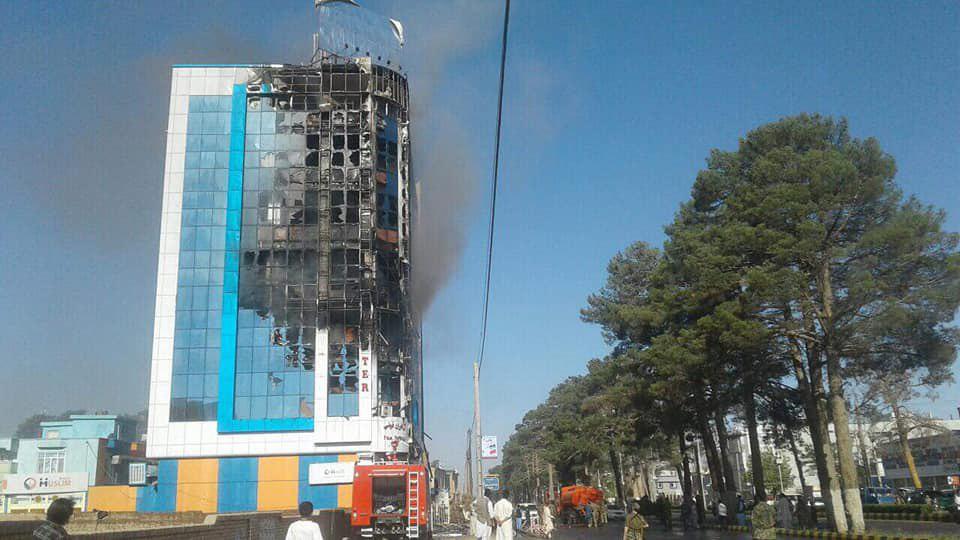 In a poor country like Afghanistan, where around 40% of people live below the poverty line, fire incidents are another challenge in their lives, due to which, thousands  of people lose their Properties and assets..

As a result of a fire incident in Milaad market at Mandawi of Kabul last week (7/11/1397), around 400 shops burned along with items and properties inside them. The caretaker of the market said that the fire was caused by electrical malfunction.

Because of the late arrival of the fire department to the area of incident and failure to extinguish the fire on time, the Raihan Business center and Dawi Business canter which are located beside Milaad market were also harmed. Aazrakhsh Hafizi, a senior member of Afghanistan chamber of commerce and industries, said that the financial loss of the fire is more than 1 billion dollars.

In this part, we discuss the recent fire incidents in Kabul, causes of fire in business centers and ways to prevent them.

The fire incident in Mandawi occurred and had become the main topic of news in a situation when only in Kabul, many markets were burned with losses of millions of dollars recently.

Due to unknown causes on 13th of Jadi, 1397, a fire started in a gas station at Haji Abdul Haqq Crossroads of Kabul. Later, the fire spread to the market near the station; Kabul tower, due to which, three people lost their lives, and 44 were injured. Besides casualties, the fire caused extensive financial losses.

A similar incident occurred at zone 2, along Nadar Pashtun road at Khairkhwa and Zarnegar markets, which were the largest centers of electronics in Afghanistan and had around 800 shops, burned entirely and the flames of the fire turned the investment of people into ashes.

Around a year and a half ago, on 13th of Aqrab 1397, Taimur Shahi market in Kabul was burned in a fire incident. Similarly, Abassin Zadran business center burned a few months ago, in which one person lost his life and had millions of Dollars of financial loss.

Above are samples of fire incidents and based on information published by Afghanistan chamber of commerce and industries, millions of dollars financial losses are endured by people because of it. All in all, such incidents have a serious negative impact on the economy of Afghanistan and its people. Thus, the government should strive to protect the wealth of people.

Causes of Fire in Business Centers

Although the reasons for the fire in business centers are still unknown, some evidence indicates the following possible causes:

Usage of electrical and gas appliances: Using heating and freezing appliances, such as heaters and water heaters, and carelessness while using them are causes of the fire.

Unstandardized Markets: Most of the Markets in Afghanistan are not built according to international standards. Such markets are built without considering risks and dangers. The presence of uncovered electric wires and unstandardized system of electricity are causes of occurrence of fire incidents in the Markets. As stated by its caretaker, the electrical malfunction at Milad market was one these causes.

Involvement of Mafia: There are also views and analysis that consider the involvement of mafia and thieves in these incidents. For instance, thieves are captured by the police, who by taking advantage of the emergency of fire, attempted to steal people’s money and properties.

Neglecting the responsibilities of citizenship: Such carelessness includes incertitude of electricity while leaving the workplace, dropping cigarettes leftovers and flammable items carelessly are also causes of fire incidents.

The absence of safety system: Most of the times, a small fire incident leads to a big incident because of poor or non-existence of fire safety facilities and basic fire extinguishing and firefighting system in business centers.

Poor urban planning: There are many places in Kabul which are not built according to the master plan. If you pay attention to the structure of the city, u will find out that the city is unorganized. For instance, u will witness baker’s shop, hotel, draper, gas seller, and business offices altogether, and therefore, it can’t be expected that fire incidents will not occur.

Public awareness: Lack of awareness of the public about the ways of fire prevention is one of the main causes of fire incidents in Afghanistan. The government is responsible for making the public aware, how to use inflammable equipment and what to do when there is fire and how to use equipment to prevent fire.

Appointment of necessary equipment: Installation of fire extinguishers at workplaces, and installing firefighting system in markets which are worth millions.

Standardizing the fire department: Although Afghanistan has an independent organ called the fire department, being below standards, lack of facilities, equipment, and professional staff are reasons why a small fire spreads and turns into the dreadful incident. To control fire efficiently and on time, the government has to standardize the department and improve it by providing enough equipment.

Concentration on the insurance system and standardization: There are investors who have lost their wealth in fire incidents. Since there is no insurance system in Afghanistan, they are unable to restart their businesses. Therefore, it is necessary to establish an insurance system so that the business centers can be insured and can help them by taking their risk if such incidents occur. Also, the buildings should be built according to International standards and by considering all the essentials.