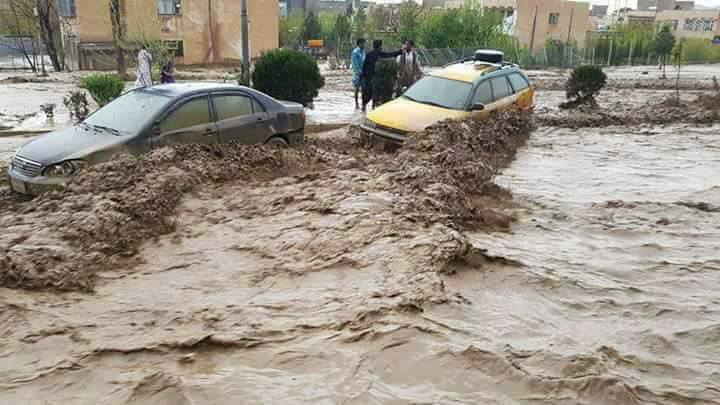 Due to floods caused by heavy snowfalls and rainfalls on 1st and 2nd March, 2019, dozens of citizens were killed and injured along with destruction of their of houses. Most of the affected people are the citizens of southern provinces.

Although the heavy rainfalls and snowfalls have increased hopes for reduction in aridity in Afghanistan, these heavy snowfalls have harmed people’s lives and displaced hundreds of families.

The government is criticized for its inability to reach out to people’s problems and absence of precautionary actions that need to be taken against natural disasters. Families in some provinces have not even attained the first aids.

Here, we discuss the latest snowfalls in the country, their damages and losses, and difficulties that people have in such circumstances.

The snowfalls have increased this year while last year, around two million people from 20 provinces lacked food because of aridity and, thus, 350 thousand were displaced from their hometowns.

According to Afghanistan Meteorological Department, very few times such snowfalls have occurred in Afghanistan during last two decades. This year’s heavy snowfalls and rainfalls are considered good news as the aridity will be eliminated.

Based on the findings of the Ministry of Energy and Water, the snowfalls have increased by one and a half compared to last year and by 51% compared to last five year. The Ministry anticipates year 1398 to be a good year considering the expected amount of water. In addition, the Ministry says that the increase in snowfalls and rainfalls are beneficial for agriculture and environment.

The amount of snowfalls have also increased in cold regions. According to Salang Pass Protection Department, the snowfalls in Salang region were exceptional compared to last 20 years and thickness of the snow in Northern and Southern Salang has reached up to 12 meters.

This year’s winter has had plenty of snowfalls and rainfalls. Although the snowfalls have raised hopes for elimination of aridity in the country, these snowfalls bear severe damages and harms for the people, especially the people of Southern provinces.

According to the reports of Office of the State Ministry for Natural Disaster, around 50 people were killed and 140 were injured due to floods caused by snowfalls. In addition, around 926 houses were swept away and around 2000 were damaged during floods.

Among the victims of floods, the people of Kandahar are the ones who suffered a lot compared to others. According to the local officials, around 25 residents of Arghandab, Daman, Speen Boldak and Kandahar City were killed and 20 were injured during floods on 1st and 2nd March, 2019. Moreover, hundreds of houses and thousands of agricultural lands were harmed by floods.

Besides Kandahar, Helmand, Farah, Herat and Nimroz were also affected by heavy snowfalls and floods, which included death and injury of many citizens. In addition, hundreds of houses were damaged by floods. Logar, Ghazni, Paktika, Paktia, Takhar, Baghlan, Laghman, Nangarhar, Bamian, Daikundi, Khost, Nooristan, and Panjshir are also among the provinces that were affected by floods.

According to Salang Pass Protection Department, more than 130 avalanches happened during this winter. Moreover, the Salang pass was closed three times this winter, which caused a lot of problems for people.

Besides Salang pass, the Kabul-Kandahar highway was blocked in Wardak, Ghazni and Zabul, and the passes Haji Gak, Shebar of Bamian and Satu Kandaw of Paktia were also closed due to heavy snowfalls. Additionally, all the routes in Ghazni, Ghor, Bamian and Daikundi between their capitals of and districts were blocked.

During Kandahar-Kabul highway blockage, hundreds of passengers were stuck in a terrible condition without food in a cold desert. Moreover, three people died during roadblock in Ghazni province.

Floods and snow avalanches are among the natural disasters that occur every year and in every part of the world and causes harms to people’s lives and properties. However, there are procedures and precautions that can be applied in order to reduce the risk of natural disaster.

Due to lack of precautionary actions taken against seasonal snowfalls and floods in Afghanistan, people suffer heavy losses. Although the government struggles to save people’s lives through certain operations during occurrences, basic precautions have not been witnessed to avoid or prepare for such occurrences.

According to Office of State Ministry for Natural Disasters, around 2000 citizens were stuck in recent floods in Kandahar and Farah provinces, who were later rescued by the national security forces. Based on the statement of officials of the Ministry, with support of other ministries, 33 million and 100 thousands of cash and food for 12,491 families and nonfood items for 3,183 families were contributed to the victims of floods in 17 provinces.

Absence of effectiveness in State Ministry for Natural Disasters is one of the causes of inability to reach out to the victims on time. Without a plan and strategy for each year, the Ministry stands in a dreadful condition, as it was not able send first aids to the victims of natural disasters at the beginning of occurrences.

Floods, earthquakes, snow avalanches, land sliding, aridity, and other are disasters that have caused a lot of harms for citizens. Even after the occurrence of disasters, the responsible department for relief takes action slowly, unlike other countries who take precautionary actions before the occurrence of natural disasters.

In short, it is necessary for Afghan Government to consider the process before the occurrence of natural disaster so that harms can be reduced. In addition, public awareness about precautions for natural disasters can reduce damages.