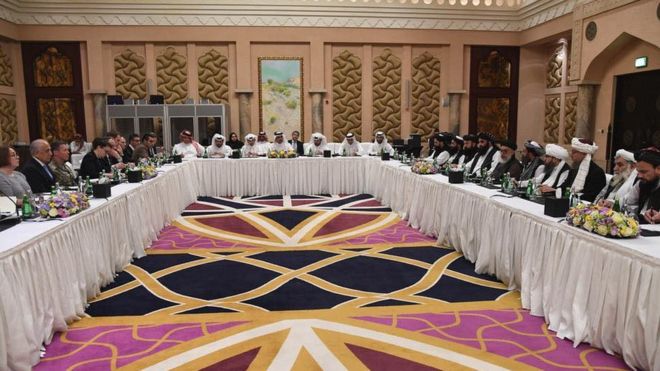 The fifth round of peace negotiations between representatives of the United States and the Taliban commenced a couple of weeks ago on 25th February, 2019 in Doha. Although there was a two-day break in talks on 28th February and 1st March, the talks resumed again on 2nd March and are still in progress.

Even though there are not enough details shared about this round of negotiations, Robert Palladino, deputy spokesman of the US Department of State said on that after the agreement on peace between the Taliban and Washington, the issues of counterterrorism, the U.S. pullout, negotiations with the Afghan government and ceasefire are being discussed.

The fifth meeting between the Taliban and the U.S. in Doha toke longer than any other times, and seemingly profound discussions on various issues are still underway. So what are the main issues on which both sides disagree? We discuss them here.

Presence of the foreign forces

The Taliban consider the presence of foreign forces as the only reason of conflict in Afghanistan and the U.S. pullout is considered to be the central topic  of discussion during the talks. The final decision about the pullout is still unknown and apparently both sides strive to enforce their conditions on one another.

Donald Trump emphasized on the U.S. pullout during his yearly speech to the U.S. Congress. However, the opposing view of the U.S. Senate about the pullout, the statements by the U.S. officials saying “if we are planning to pullout of Afghanistan, then we will focus more on our secret services” and other dissimilar opinions have made the issue more complicated.

Additionally, The Taliban have always stressed on the U.S. pullout before discussing any other issue. Although not enough specifics have been proclaimed, according to the media, one of the vital issues being discussed without reaching an agreement is the schedule of U.S. pullout. It is being said that the United States wants three to five years for pullout but the Taliban want the pullout to be completed in less than a year.

After the peace agreement and the U.S. pullout, counterterrorism and not using the Afghan soil against any other country are conditions that the United States strives to impose on the Taliban.

Regarding this issue, the Taliban are liable to present convincing guarantees through which the United States can persuade their people about the pullout. However, the question is how can the Taliban guarantee “counterterrorism” considering various militant groups and the ISIS who operates since four years and strive to expand its presence in Afghanistan. On the other hand, disagreements between the two sides over the definition of “terrorism” have brought up more complications.

Ceasefire is another key issue being discussed during the talks. Although a proclamation of Taliban’s office in Qatar refused any discussion on ceasefire, the U.S. Department of State says that ceasefire and negotiations with the Afghan government are topics of discussion in the current talks.

It is presumed that the Taliban do not want ceasefire to happen before the final agreement on the U.S. pullout. This is because the last three-day ceasefire during Eid, when their combatants returned to the cities, weakened the morale of some Taliban fighters.

The Taliban demand reforms in the constitution and structure of the system. On the other hand, the Afghan Government does not want Afghanistan to become a Taliban-ruled country. These are issues which need plenty of time and discussions. However, to prevent dead end, it will be required to establish a comprehensive national board for peace that should negotiate with the Taliban on behalf of Afghans.

On the other hand, the Afghan war does not have only two sides (i.e. the Taliban and the U.S.) but its third and significant side is the Afghan nation who holds some opposite perspectives about the process. However, if some influential personalities participate in the peace negotiations to represent the Afghan nation and the Taliban also provide answers  to people’s concerns, a joint stance may be achieved. Thus, the Taliban should strive to make their motive of the independence of Afghanistan, the motive of whole nation and through this put pressure on the U.S..

At the same time, the Afghan nation does not want the failed experience of one sided rule or a government controlled by a single party to be repeated in Afghanistan. In addition, the nation is also worried about the return of economic conditions that once existed in Afghanistan. These concerns can be only answered when the Taliban and other parties guarantee not to repeat the previous experiences and try not to reach power through force and weapons.

The future of current negotiations

An insight to the previous international peace treaties will indicate that the peace talks require patience and time. The peace negotiations between the FARC and Columbian Government, for instance, started in September 2012 and it took four years for the peace treaty to be finally signed in August 2016. Similarly, the peace negotiations between Hezb-e-Islami and the Afghan Government started in 2010 but the treaty was signed during the National Unity Government in 2017 and Hezb-e-Islami had much more lenient viewpoint about peace compared to the Taliban.

The current peace negotiations process commenced around five months ago and a look at the history of peace treaties in the world and the past 18 years of war in Afghanistan will validate that it is difficult to end a complicated war in such a short period of time.

On the other hand, the Taliban are executing the politics of waiting and it is assumed that the Taliban are in a condition that they do not see any harm in waiting but they see it hurrying. The Taliban understand that the U.S. has the intentions to pullout. If the pullout does not happen this year, it will happen in next few years. In addition, Donald Trump might decide about Afghanistan for his success in upcoming elections. Therefore, the Taliban are confident that the U.S. is deciding about pullout and see advantage in delaying the negotiations.

Another possible cause of delays in peace negotiations process is that both sides strive and discuss to secure their interests. Overall, the level of complication of these negotiations is high enough to require plenty of time and it will be inaccurate to say that all the issues can be resolved in a short period.