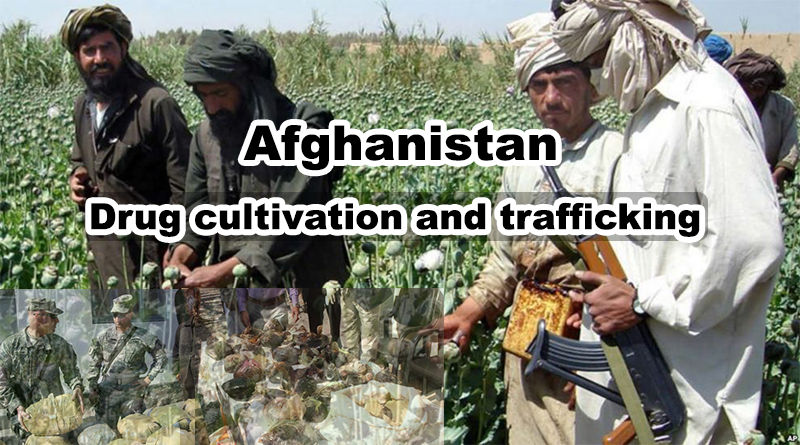 The issue of drug is a global challenge and no country in the world is safe from the negative consequences of this ghastly phenomenon. Drug trafficking along the nuclear crisis, population crisis and the environmental crisis is the fourth major global crisis, and according to some statistics, the number of addicts is reached to more than 250 million people around the globe. Since most of the addicts are consisted of young people, which are the active force of the countries, the negative economic impacts of this phenomenon are also disastrous for humanity.

In Afghanistan, however, the exact number of addicted people with this lethal material is yet to be existed, but some statistics show that there are more than one million addicts including women in our country.

Afghanistan is considered as the world’s largest producer of drugs and the relationship between Afghanistan and opium date back to centuries; however, in the past three decades, the country has been producing a large proportion of the world’s opium.

The situation of poppy cultivation and drug production in Afghanistan, the failure factors of the Afghan government’s struggle with this phenomenon and the impact of a common regional strategy for a coordinated struggle against narcotics are issues that have been discussed in this analysis.

The history of drugs in Afghanistan

The cultivation of narcotics in Afghanistan has a long history. People in this country cultivated poppy both before and during the Cold War; however, the exact statistics of the drug productions at that time is not in hand. Nevertheless, in the post-cold war era, Afghanistan was one of the countries in the world that produced the most amount of drugs. In 1997, Afghanistan produced 2804 tons of poppy while in 1999 this amount increased to 4565 tons. Nonetheless, in 2001, after the Taliban Leader, Mullah Mohammad Omar banned the cultivation of narcotics issuing a decree, the poppy production of the country reduced from 3276 tons to 185 tons only.

The joint report of the Afghan government and the UN shows that in 2016 the cultivation of poppy in Afghanistan has increased by 10% and its production has augmented by 43%. The cultivation of narcotics has also increased in 2017 compared to 2016. Authorities in the Afghan Ministry of Counter Narcotics believe the ongoing insecurities to be behind the increase.

Drug smuggling is the fourth global crisis. Based on some statistics there are 250 million drug addicts around the world. Nevertheless, Afghanistan is one of the countries that suffer great losses due to the cultivation of narcotics. This phenomenon, on the one hand, has affected the

prestige of Afghanistan and, on the other hand, 3.5 million Afghans, somehow, use drugs, the

condition of 1.5 million of which is presumed concerning. Some statistics suggest that 30% of these addicts are children and 7% are women.

After the collapse of the Taliban regime, the Afghan Ministry of Counter Narcotics was established in the Bonne Conference. In 1393, the then-Afghan President Hamid Karzai announced the fight against drugs to be one of the priorities of the state and banned the cultivation and production of narcotics.

A strategy that increased the cultivation, production and trafficking of narcotics

Based on the report of the Special Inspector General for Afghanistan’s Reconstruction (SIGAR), until 2014, the US has spent $600m in the fight against narcotics in Afghanistan. Despite all these expenses, the Afghan government has failed in all aspects of the fight against drugs including preventing the cultivation, production, and smuggling of drugs as well as addiction to drugs and curing drug addicts, something that the Afghan authorities accept too. In June this year, the Second Afghan Vice President Sarwar Danish said the Afghan government’s efforts to fight narcotics had not produced desirable outcomes.

Moreover, the failure of the counter-narcotics efforts and the presence of drug mafia in the country have resulted in the increase in crime incidents, particularly the organized crimes.

Why the fight against drugs is not successful?

One cannot mention one single factor to be behind the increase in the cultivation and smuggling of poppy in the past one and half decade, but there are a bunch of internal and external factors behind it, the most important of them being lack of firm international and internal will in the fight against drugs.

Influence, power and the role of the elements with links to the internal, regional and international gangs and mafias as well as the high level of corruption in the administrations of the country are the main factors behind the failure or counter-narcotics efforts.

Insecurity and war in the country, with 40% of the Afghan territory under the control of the armed opposition of the government, lack of a strong government that has the support of its people, encouragement of poppy cultivation by the armed opposition of the government in insecure provinces, high demands for these substances in foreign countries particularly in Western countries are factors that have challenged the fight against drugs in Afghanistan.

A good source for funding the war in Afghanistan

According to UNODC, from 2001 to 2010, $70 billion worth drugs had been produced in Afghanistan, but the question is that how much of this enormous amount obtained by Afghanistan, especially by Afghan peasants?

According to this report of UNODC, only $2 billion out of the entire $70 billion went to Afghan farmers’ pockets and $66 billion went to the drug smugglers and Mafia outside Afghanistan. This organization believes that $200 million of this amount ($20 million per year) also goes to the armed opposition of the Afghan government.

Counter Narcotics in the Regional Level

Drug trade comes third after oil and weapons’ trade in the world in importance and profit. Based on the statistics of UNODC, Afghan farmers gain only $2bn out of $70bn income produced by their poppy productions, and the remaining $66bn goes into the pockets of drug-smugglers and international mafia out of Afghanistan.

If the neighboring and regional countries froze the bank accounts of drug smugglers and prevented the sales of substances that are needed to process heroin, the fight against narcotics would to some extent succeed.

Although there are many challenges on the way of the fight against drugs, in this regard, the recent initiative to prepare a joint strategy is one of the solutions, and if there exist strong will and determination to fight against this phenomenon, these efforts will succeed.