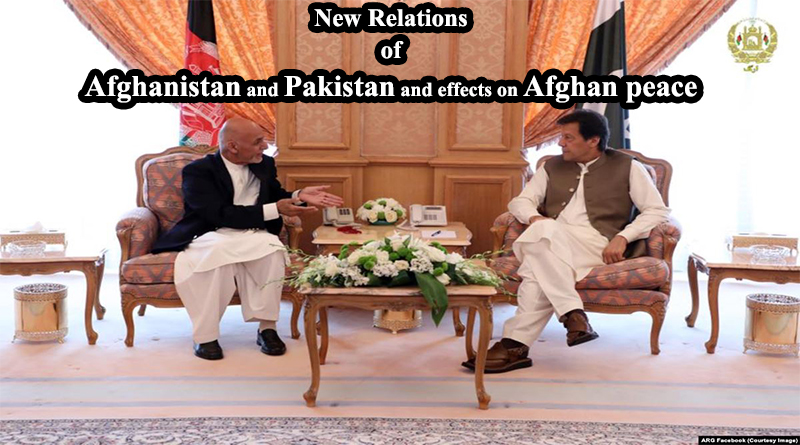 On June 27th, after the visit of the Afghan political parties’ leaders, President of Afghanistan, Dr. Mohammad Ashraf Ghani, was invited by a senior official of the Pakistani Prime Minister, including the National Security Advisor, the Interior Minister, and the Finance Minister. Senior government officials had joined traveled to Pakistan.

It will have a real impact on the creation of new relationships with Pakistan after a long run, and what will this journey have to do with the achievements of the past? And does Pakistan now have the capability to achieve key role in Afghan peace? This is analyzed and similar issues have been analyzed in this weekly report.

A brief overview of Afghanistan and Pakistan relations

After the fall of Taliban in most parts of the country including Kabul, and instead appears of the US and NATO bedding, Afghanistan and Pakistan relations have come up with a high level of depth, both in the President of the former President Hamid Karzai In the stages, he tried to improve relations with Pakistan, and prevented the country from interfering in Afghanistan, in the same way that he had traveled more than 20 times to Pakistan, but the main political figures of the President Hamid Karzai, Rangin Dadfar Spanta, who has done major government duties as the Foreign Minister and the National Security Advisor, So he claim that 13 years of the negotiation is a waste of time and this won’t give any results.

National unity government ties with Pakistan during the period

After the formation of the National Unity Government, President Dr. Ashraf Ghani extended long-term friendship to Pakistan, believed that the construction of good relations with Pakistan would prove to be effective for Afghan peace and economic development, He traveled to Pakistan in 2014, and after taking over the political authorities, he also appeared on the center of HQ, and said that according to political and military experts, he signed agreement also with them, but Rahmatullah Nabil, the former National Security Director, related to this, some Afghan officials, Mr. Ghani’s work, Look against benefits of Afghan government.

The national unity government in the past has failed that the Pakistani side did not have the promises and those promised during the visit of Mr. Ghani, because of the war in the country, and with the military component Civilians were killed more than a previous, so the unbelievable air strike again took place in the country, and in the fort, Mr. Ghani rejected the Pakistan’s help that announced for the economic development of Afghanistan. He also mentioned that to stop supporting Taliban, and the Pakistani side met with the armed insurgents. Accused of connection.

There was a miss trust between the four years relations of the Afghan and Pakistani sides, and the place was still going to spend only allegations, but after the last year’s elections in Pakistan, the justice party got the country’s highest level of success. And in the end, Imran Khan reached to be on the Prime Minister’s seat, after his success stressed the importance of establishing relations with Afghanistan, and in particular, and in coordination with the military force in Afghan policy. Changes have made, some work-wise economic problems in Pakistan, especially in the country, the IMF issue, and pressure by the international community that helps to support terrorism, and that si why Pakistan is reached to be in the black list.

Mr. Ghani called to Imran Khan to congratulate Imran Khan after the telephonic telecommunication, and invited him to visit Afghanistan, which was accepted by him, but on the 14th session of the Islamic Cooperation Organization in Saudi Arabia President Hamid Karzai and Prime Minister Imran Khan talked briefly about issues related to bilateral relations, terrorism, business, peace and India’s prohibitions of Pakistan’s airline flights, and besides this, the National Security Advisor Hamadullah Muhib and Immigration Minister visits Pakistan, and once again they reopened to the formation of trust between the two countries.

After the victory in the election of the Pakistan Justice Party in Pakistan, the economy of the country has gone downward in compare to the past, and the reasons, the demand for other loans from the World Bank, and there were a number of recommendations and conditions to be presented, that the result was that the Pakistani monetary unit have lost its value by the passage of time, against the dollar. And there are increased in prices of goods and especially oil and gas.

Besides, the lack of foreign investors in Pakistan also missed the country with economic slowdown, the main reasons why the Pakistani army, which has contributed a large portion of the budget for every year, has made it a huge economic slowdown this year, Its budget has reduced some part, and on the other hand, it is said that wide area of Pashtuns and Balochs in the country remembering their own rights, and behind the slogans of the military, Afghanistan Ensure that the public support of the people, as well as announcing the reduction of their budget, is also the way to which the wind is going to the west.

In Pakistan, economic deficit has decreased in comparison to the past, the current government of Pakistan considered to be an opposition government, and is accused of being created by the army, wants to comply with its commitment to Afghanistan. Live upgrade, in order to protect their economic interests in this way.

On 22nd of June by the name of series of Lahore near to Islamabad conducted summit or gathered for the peace of Afghanistan, The two research agencies have been organized the gathering and also the Afghan political leaders and important political figures such as former prime minister Gulbuddin Hekmatyar, presidential candidate Mohammad Hanif Atmar, the head of the High Peace Council Karim Khalili, and many others are involved, some of which the Agenda And the demands of permanent nations on both sides of the Durand Line statement against.

There was also, and Mr. Atmar and Hekmatyar again highlighted the importance of Pakistan’s role in Afghan peace, although the Taliban did not attend the same session, but said Pakistan’s Foreign Minister Shah Mehmood Qureshi in a memorandum of speech. , the country has been more effective because of internal security, and peace in Afghanistan depends on aid to secure a fixed interest of Pakistan, and the meeting was important about the views change about Pakistan called the Remembering the meeting and President Ghani’s visit, like three meetings of Doha, Moscow and China, and to integrate all of this. He missed Afghanistan’s support message on behalf of his country.

The meeting agenda issues which included expanding the Afghan peace, refugees and bilateral relations were, perhaps the issues are, who is from Kabul, much higher than the threats of leaders, and only at the level of people it can be useful to expand relationships.

President Ghani’s visit to Pakistan and its effects on peace

On 27th of June President Ashraf Ghani, who had joined a senior government delegation, went on a two-day trip to Islamabad And this travel agenda included discussions on regional trade, trade, transit, security and peace.

President Ghani accompanied by Foreign Minister Shah Mahmood Qureshi , Prime Minister Imran Khan, along with representatives of political parties and leaders alongside President Arif Alavi. and besides Islamabad Strategic Studies Institute in relations, economic development of both countries were identified economic development proposals to Pakistan, beginning of a new relationship between the Prime Minister of the two countries, Mr. Ghani, cooperation and Important shoots to create trusted space . And in support of the peace process, under the leadership of the Afghan government, in the upcoming presidential election, the country has also called its own uninterrupted hit. Meanwhile, Pakistan authorities have pledged to open the Afghan route to Afghan trucks, and the Torkham gate pass was opened for 24 hours before the two trade-related trucks, which could be done by both sides. Countries are good and decent edge in gaining export, but that traders and truck drivers also face problems of visas, and can deliver their goods on time Pakistani market, so there may not be a good impact on the exports of Afghanistan. But it is expected to consult the trade and industry in the Prime Minister Imran Khan to Abdul Razzaq Dawood will travel to Kabul in a short time, if the direction the problem with resolve, could be good result for traders have to Mr. Ghani Lewin trip against the first deputy chief Saleh Pakistani politics and locally fail and B visitors to the upcoming presidential elections, and He added that Pakistan’s support to their interests like the Taliban armed groups the taste, and the current visit of Dr. Ghani in Kabul and the international community Last wait to see how much practical steps Pakistan takes.

On the one hand, a visit to Dr. Ghani’s to the agenda was considered an important milestone, and according to Pakistani officials and experts who traveled for a visit to Dr. Ghani’s visit, and his country’s role in peace was important, But the recent statement of Amrullah Saleh , the Taliban, was illiterate, and before the visit of Mr. Ghani, the Lebanese summit was built on peace, Called an unsuccessful meeting , and the Afghan leaders accused him that he did not defend the interests of the national community, where such statements in the peace process questioned Mr. Ghani’s visit agenda.

Dr. Ghani trip with the some special silicone is having nothing special, because the Taliban have always claiming Pakistan for Taliban support. and such statements not only condemned, but the Kabul administration Though they  have also emphasized the discussion , The former ambassador to Taliban Mullah Abdul Salam showed past experiences, regional countries could not play a good role in Afghan peace, because they try their interests for their own interests, and only face the Taliban and the US Talk to Afghan Peace Proved to be useful, so far the US and Taliban talks conducted six stages, and the seventh may be started again after Qatar.

This is the way to establish a Taliban by fighting a war, and coming peace in Afghanistan is connected to them , and now Pakistan is not in the position that the Taliban can face a dialogue with the Afghan government, so Pakistan believes that it can be, play a crucial role in Afghan peace, recounts is a waste of time, and Dr. Ghani trip cannot be like previous ones, in the Afghan peace have the greatest impact, but On the other hand, it can be seen to be effective for the economic benefits of Pakistan.