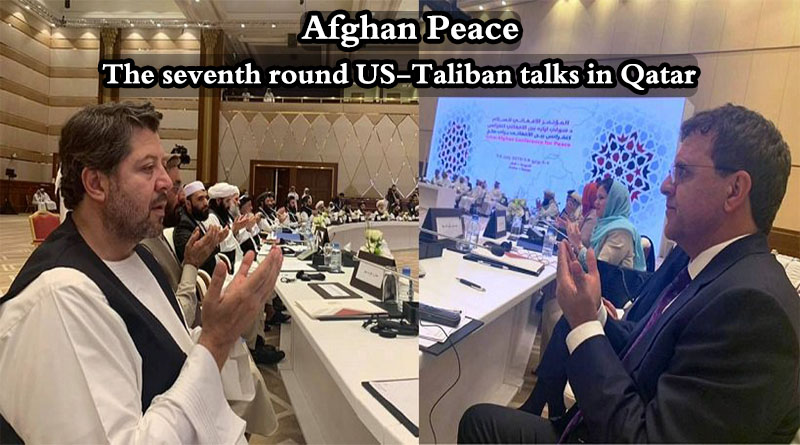 The peace talks have entered the seventh stage between Taliban and America. At the end of the seventh round of the scheduled peace process is assumed to be announced. Both sides acknowledged that progress has been happened and the numerous discussions and reached a consensus on the issues. Nevertheless, the peace agreement has not yet been announced.

The updates about peace talks? What will happen to the seventh round of negotiations? how much progress has been happened about the agreement of peace? Why announce of the agreement are still delayed? These similar questions and other questions are answered in the analysis of this week.

Peace talks between Taliban and US

On 28th of June American diplomats and Taliban’s leaders started the seventh round of peace talks in the Doha of Qatar, which was scheduled for three days and at the end the talks both sides will finalize the text of the agreement.

At the end of this round of negotiations the, US special envoy Zalmay Khalilzad, And the Taliban leader Mullah Abdul Ghani Brother (Head of the Political office of Qatar) and Minister of Foreign Affairs and extremely serious debate among National Security Advisor, found the materials after breast agreement and the negotiations of the period stretching exercise. This round of talks scheduled to be after a day break and then go after the 6th of July.

Both sides agreed that in this phase of negotiations, the agreement most of the issues that have remained in the slow resolution procedures, and they were close to agreement in the last round of talks, but still unclear that peace talks when will be finished, and also will be able to confirm the agreement at the end or not.

Taliban and America still haven’t announce the final timetable for the foreign troops to be withdraw from Afghanistan and even haven’t prepared any kind of policy for the presentation of Afghanistan from the terrorist groups, but the Taliban has insisted that the withdrawal of foreign forces must be happen in presence of International If this is a foreign troop withdrawal announcement is also the final text of the agreement about, the process logistical aspects, such witnesses will announce the extent representative, So who will attend the announcement, Where will happen this announcement? and there are other things that which delayed the announcement of the agreement.

At the same time built in Qatar and Germany hosted a conference on intra negotiations in the 28th and 29th of June at Doha, aimed at building confidence shown to provide space between the stakeholders. In this conference, 64 people, including government officials, High Peace Council members, tourists, civil activists and women, have participated in the conference, but the Afghan government and the Taliban have launched it not a formal dialogue between the Afghan government and the Taliban. Participates in a private conference.

Meanwhile, participating in the memorandum conference, Afghan delegation members say that the Conference will prove to be effective in making way for negotiations with the government and Taliban. According to participants, the whole effort will be made to go through the talks at the main point of negotiations, which are discussed between the Taliban and the Afghan government. Strategic and regional research centers will evaluate the results of these articles in future analysis.

The Process of Negotiation and the Impact on Peace

Peace negotiations between the Taliban and the US have risen the hope for the war of last 18 years. At the same time, the conditions presented by both sides and the differences of opinion related to some of the issues have slowed down the proposal. The depth discussions ongoing seventh round is important because of the agreement which is set to be announced at this stage of the peace talks.

US is ready to announce the timetable of withdrawal of the foreign troops with the condition that Taliban must give the assurance about the prevent of terrorist groups operations, Seize of war in Afghanistan, Negotiation between Afghan government and Taliban. But Taliban are insisting for withdraw of foreign forces from Afghanistan.

The Taliban were not ready to attend the negotiations in Moscow and Qatar ‘s inter-talks with Afghan government. The government then recognizes peace and movements of peace under the leadership of the government. This is where a survey of Strategic and Regional Research Centers shows that many people look at the Afghan government’s efforts in peace as a doubt.

The Taliban’s position about the future of Afghanistan is still to be in the form of the Islamic Emirate and it is ready to work together with other political dimensions, but the Taliban and the government have no mechanisms yet to deal with the talks with the Afghan government.

In the current situation, every part of the war of Afghanistan is trying to protect its interests, while in a very sensitive phase all the side-by-side and needy sacrifices needed.

The seventh phase of negotiation between the Taliban and the US finally shows that there has been significant progress in peace talks and will be announced a peace agreement.The seventh round of negotiations stretching over three days and one day of break after the begins of 6th July. US and Taliban without giving details confirmed that talks were remarkable on going and they have agreed upon some points.

Peace ongoing negotiations has to raised hope to end the war, but after foreign forces withdraw situation and form the next government is one of the major issues that concern them trouble.

A long-lasting war in Afghanistan and a lot of hardship of the Afghan people, all sides of the war need to favor and take the benefit of the opportunity of the peace talks as people are gone through too much hardship and problems during the last 8 years of the war inside of the country. Losing this opportunity will be a mistake in history of Afghanistan.