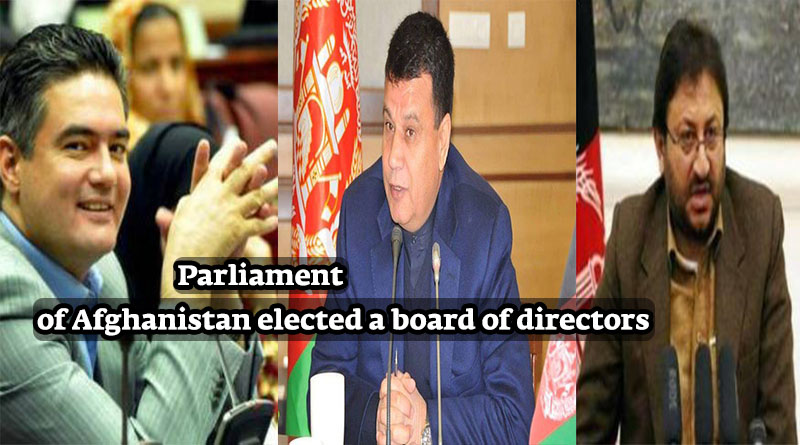 Nearly two months have passed since the opening of the House of Representatives by the President. Unfortunately, this parliament has been struggling over the past two months to appoint a chairman and board of directors they are succeeded in choosing the speaker of parliament and deputies last week but the secretaries of the parliament have not yet been elected.

The Administrative Board after the three-stage elections for the board of Wolesi Jirga, Amir Khan Yaar by getting 131 votes as first deputy and second deputy Ahmad Shah Ramazan by getting 119 votes in the House of Representatives were announced. We have analyzed in this week’s brief biography of the newly elected chairmen and vice-chairs of the Wolesi Jirga.

Mir Rahman Rahmani, son of Haji Qalandar Khan was born in 1962 in Bagram, Parwan Province, in a relatively modest house. He was graduated from Bagram High School in 1979.

Mir Rahman Rahmani has studied abroad at the Russian military university in the 1982 he has graduated in the military field of the university. From 1982 to 1986 he was at the Council of Ministers and the executive member during Dr. Najibullah’s government he worked in the troops. In the regime of Mujahidin, he worked as a commander of Gen. Baba Jan, his brother was in the former Soviet regime, Served as a senior military commander.

After Kabul province was seized by the Taliban group, Mir Rahman Rahmani, along with his brother, General Baba Jan, left Kabul, and joined the Ahmad Shah Masood on the resistance front and During the years of resistance to the beginning of the interim period led by former Afghan President Hamid Karzai, He was in the armed forces of the country and reached to the level of general. In the last years of his service, he served as the 40th Bagram sectarian commander, and he has financially strengthened his position and then left the army and and started his own business.

Rahmani from the Trade Field to the Presidency of Parliament

Mir Rahman Rahmani before to find way to the sixteenth tenure of the parliament, he was one of the tradesmen and financiers who have a reputation among the people, Especially the people of Parwan. Mir Rahman Rahmani, who is the top trader of Afghanistan the majority of its capital through the fuel transport and rustics with America, NATO and the Afghan government has accumulated. It is said that in this regard, son of Mir Rahman Rahmani, Haji Ajmal Rahmani, who had studied in American universities in London. And Haji Ajmal Rahmani is also elected as a member of the seventeenth tenure of parliament, has an important role. Relation with foreigners and Foreign Education Ajmal Rahmani Caused that Has attracted the attention of foreigners for many years, has obtained large contracts of US and NATO military units on Bagram Airfield.

Mir Rahman Rahmani before the President of the House of Representatives, while he was engaged in commercial activities and he was chairman of economic Social Council of Bagram province, President of the Chamber of Commerce and Industry of Parwan province, National Economic Council Chairman House of Representatives and a member of the friends of Afghanistan and Saudi traders. According to news agency BNA, In the 1392 the argument between Mir Rahman Rahmani and Ferdows son of Khwaja Nabi commander in Charikar had taken the gun battle lasted and resulted in Three civilians were killed and one injured.

Despite the fact that opponents say Mr. Rahmani incompetent leadership of Mr. Rahmani and just he used the money to reach to Parliament and to the chairman of Parliament, supporters of Mr. Rahmani is claiming that he is good person, you know that It seems that he built dozens of mosques and schools in his personal finances in Parwan, And he has reconstructed several avenues and roads in the province. He himself claims that he has made Parwan (Avenue of Province), along with some other roads in the province, from his own capital.

Mir Rahman Rahmani said in an interview with a media that already affiliated to the People’s Democratic Party Afghanistan, Party in the whole world had collapsed, and unpopular, and adds that now independent and referred to all the people of Afghanistan. Mr. Rahmani, as he has his own opponents inside the parliament, sees a number of people in his community as a result of his left-wing history, while others consider him as the head of the parliament to be good to the people. And the state knows. So the performance of Mr. Rahmani’s first 100 days in Parliament will show which groups are right.

Deputies of the House of Representatives

Amir Khan Yaar is the first deputy of the House of Representatives in the 17th parliament of Afghanistan, born in 1974 year and a representative of the people of Nangarhar province. Amir Khan Yaar an engineering graduate from Pakistan and he has worked with foreign institutions.

Amir Khan was the head of the YAAR institute before he comes to the House of Representatives, Administrative Director of the International Institute STI, Director of the regional program of the institute SERVE He also served in the sixteenth round of the House of Representatives as Second Deputy Speaker of the Parliament and the members of the Finance and Budget Commission and generally has a good administrative capacity. During the jihad, he has a history of membership with the Islamic Party of Afghanistan headed by Engineer Hekmatyar, but in recent years, along with politics, he has been well-known on the trade square. He has been elected the first vice chairman of the House by obtaining 131 votes.

Ahmad Shah Ramazan representative of the people of Balkh province during the 16th and 17th Wolesi Jirga, was born in 1969 in a wealthy and influential family in Balkh province. He is holding bachelor degree in engineering from Tashkent, capital of Uzbekistan, And by obtaining 119 to the second deputy House of Representatives in the 17th Parliament was elected for one year. Earlier, Ahmad Shah Ramazan assignment as a member of the Senate in the fifteenth round of the National Council and a member of the Finance Committee in the House of Representatives of Afghanistan.

Ahmad Shah Ramazan has been closely involved with Mohammad Mohaqiq, the leader of the Islamic Unity Islamic Party of Afghanistan, for twenty years now. In 2013, when he was traveling to Kabul, he was faced by roadside mines between Polli-Khumri and Doshi districts, but he survived his life. In this incident, two of his bodyguards died and the third one was wounded. Earlier, his older brother, Ashraf Ramazan, was one of the leading candidates in the 2005 parliamentary elections. In Mazar city, he was murdered.

The first challenge is the issue of peace that has reached a critical stage and the fate of America is in the midst of the rush of coolness and the Afghan government still seems uncertain. What role will the Wolesi Jirga do in this direction? If the new Wolesi Jirga can reconcile the security treaty between Afghanistan and the US, it will have done great work to redefine the US-Afghan relations from the ground up to the interests of both sides.The second challenge is the relationship between parliament and government that unfortunately, throughout the period of the national unity government was weak rather than the interests of the people, that was of immediate interest and bilateral trade is rotated. Will the new parliament be able to transform this relationship into a rule-based, trust-based relationship? More than 60 legal issues await the final decision of the Wolesi Jirga, how will the new House of Representatives interact with these legal protocols? So that is why the debate is crucial.

The third challenge is to restore the trust and confidence of the people in the Wolesi Jirga, which unfortunately has been badly damaged during the past and present elections in the recent parliamentary elections. The house of the nation must regain the trust of the nation. And this responsibility rests first and foremost with the new chairman of the parliament and the new administrative board. We hope that the elected new parliamentary delegation will have learned lessons from the failures of the previous parliament and will re-establish beliefs in the House of Representatives with different style of management.