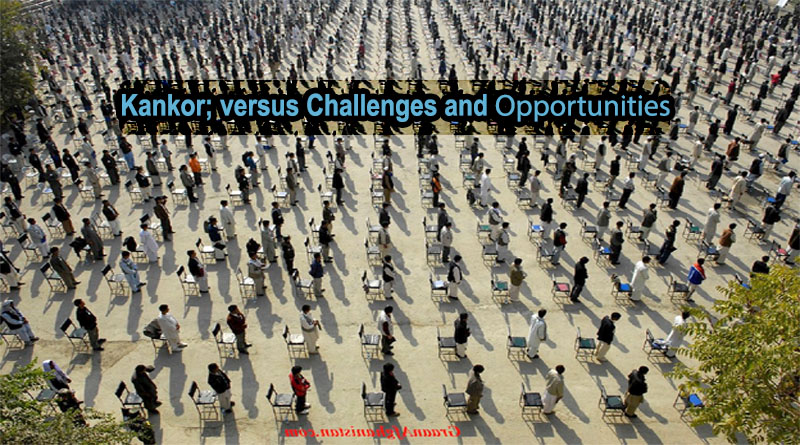 The results of 2018 Kankor Exam (university admission exam) were announced on 10st July 2019,

Kankor is a process future generation to achieve our goals participants, kankor exam had 8 decades history In Afghanistan, after 2017 kankor exam In a very simplified way, and since about two years has been developed exam system according to modern technologies, which greatly facilitated the reduction of fraud and corruption in the results of the examination.

The situation of Afghan higher education institutions and their challenges and opportunities are discussed here.

The Kankor exams for 2019 students began on the 7th of this month 2019 in the states of Khost, Lugar, Paktia and Kunar. The last examinations were held in Kabul on 28 June 2019, where it was announced after a ten-day pause.

Previously some reports had emerged highlighting the occurrence of some fraudulent activity in Kankor exams in previous years; however, after the National Unity Government (NUG) came to power, it took some measures in order to ensure transparency of the exam leading to improvement in the credibility of the exam. Nonetheless, the higher education institutions face numerous complications in general.

The Government of National Unity has taken significant steps towards the transparency of the examination process and has been remarkably successful. However, if we pass the exam, the university education centers in Afghanistan will face difficult challenges.

Similar to other public sector bodies, Kankor was also tainted by corruption in the last 18 years. Corruption in the Kankor Examination Committee, lack of compliance of exam questions with academic standards, intervention of strongmen and some government officials in the process, entering exam as a substitute, and other fraudulent cases are what drove people’s concerns over the transparency of the Kankor Process.

Transparency in the Kankor exam and prevention of corruption in the process are considered an important achievement of the National Unity Government (NUG) after it took power. NUG made use of high-tech machines in exams in order to prevent corruption in the Kankor of the Ministry of Higher Education. The system, unlike the previous one that provided every student with similar questions, contains unique questions for every student as it prints their paper out, prepares it and writes the name of the student down on it.

We cannot say the corruption hits zero in the process either, however, through the use of new technology, the exam is now transparent in comparison to the past as copying, substituting and leaking of questions before exam were very rife. This has made the people trust its transparency more than ever.

87 years ago, the very first higher education institution (Kabul Medical University) was founded in 1932. Development in the field of higher education was stagnant until 2001. Before that, war and instability had created a standstill in development; however, after the new system was established in 2001, remarkable progress has been made in this field.

Looking at the bigger picture, war and insecurity have impacted the higher education system as well, but on the other hand, lack of a well-thought strategy of the Afghan government with regards to higher education, mismanagement of the Ministry of Higher Education, out datedness of the curriculum, lack of its compliance with modern needs, corruption, weak monitoring in the higher education institutions, lack of professional academic cadres, lack of attention to research in universities etc. are problems that have lowered the quality of higher education to a large extent.

The reasons mentioned before and other similar problems have made university-graduated students a burden to the society. With scarce employment opportunities and a growing educated work-force, frustrated youth become an additional challenge to the many challenges already facing Afghanistan.

Graduates from university are unemployed

Afghanistan is one of the youngest countries, accounting for 9 percent of the population in the central census, but if you compare the situation of young people and other countries, it is clear that Afghan youths are forgotten and the backward generation has hundreds of social problems. Every year, thousands of young people come to poor students in Kankor, and even young graduates of universities are distrustful of their future. It is seen in the squares that there is some work from morning to evening, but at night there is some work to find and some going to disappointing homes. Due to economic and social problems, young people often have to flee opposing lines because of unemployment or escape from the country. More than a million young people have been unemployed in the state of national solidarity, and poverty is increasing day by day, and about 8 percent of the population now lives below the poverty line. Life is low, and according to Ashraf Ghani, Afghan President, 5% of the population of this country is sleeping every night. Therefore, it seems clear that the government has not graduated with any mechanism or policy to hire young people.

The examination must be substantially improved and bring the country’s best talents to the higher education system, or use graduate education opportunities to study abroad. Making it a success is one of the main steps in creating a system of education, initially providing an opportunity for balanced and balanced development of the talent of society. Coordination exams should be removed from the current provincial level and avoid any coercion and implementation of local health and effects, which was combined with electronic monitoring and assessment this year. However, in many areas that have been resolved, some of the necessary reforms mentioned above have to be made, as well as the government’s need for young people who have graduated in the short and long term. Employing a long-term program and creating jobs abroad so that these young people can work, use technology that has been used in other countries as well as the cause of its development, and use it to secure the country.

It is necessary for ministry of higher education to send capable and responsible individuals to monitor the exams.