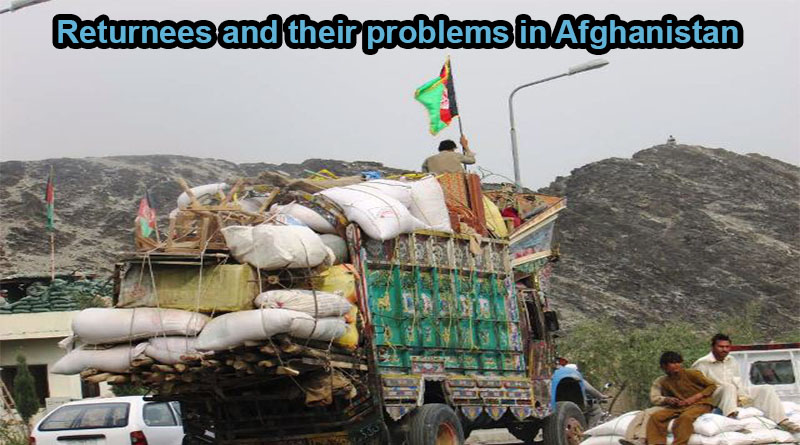 Afghan refugees who returned to Afghanistan between 2014 and 2017 tend to be worse off financially and face multiple economic difficulties compared to refugees who stayed in Pakistan, finds a new joint report by the World Bank and UNHCR in Afghanistan.

The report entitled “Living Conditions and Settlement Decisions of Recent Afghan Returnees” is the first joint report resulting from the collaboration between UNHCR Afghanistan and the World Bank. The report analyzes the living conditions of the large Afghan refugee population that returned from Pakistan between 2014 and 2017

Regarding the importance of this report, the United Nations High Commissioner for Refugees, Lady Caroline Van Buren ( (UNHCR In Afghanistan, he says : “The findings and statistics provided in this report for the UNHCR and other partners, including the Afghan government   Will help fund the efforts to support refugees and internally displaced persons . “

While the United Nations High Commissioner for Refugees (UNHCR ) As a result, of their findings, Afghan refugees who returned in 2018 under, the program of voluntary and facilitated by the United Nations High Commissioner for Refugees have returned, mostly from Pakistan and a few of them from Iran and other countries. This figure is 73% lower than 2017 that 48,800 refugees had returned, economic and security situation in more inappropriate situation from Pakistan and Iran.

In this analysis: The history of immigration in Afghanistan, the afghan Government’s position towards immigrants and what will be the current status of Afghan refugees will be discussed.

History of immigration in Afghanistan

As discussed immigration and asylum as a major problem in the region and the world goes, UN report cites a number of them in 2018 of 70 million 800 thousand Read, said that on a daily basis about 37 thousand increases worldwide

Afghanistan is among the countries that ranked among the most migrant countries and the number of Afghan refugees following Syria is ranked second in the world.

It should be noted that the migration debate in Afghanistan has a long history and its description needs to be discussed in detail. Here, historical events are related to the concrete facts of the Afghan community, which began the forced migration of Afghans from their country to the beginning of the communist regime in the country. To make Since the Afghan government led by Noor Mohammad Tar qi and Hafizullah Amin, who were the symbols and executors of communist party, were held in Afghanistan.

In proportion to the cruelty and violence that they have done against the people, 400,000 Afghans migrated to Pakistan, and the number of immigrants increased by the foray of the former Soviet Union to Afghanistan in 1980s, in that case more than four million Afghans has migrated to Pakistan.

The number of refugees reached over five million until the 1984 in Pakistan and Iran. But after the downfall of the communist government (1992), the process of returning Afghan refugees began to the country.

It should be remembered, many of the compatriots immigrated to neighboring countries during the civil wars in Afghanistan.

But after 2001, the return of refugees to Afghanistan was resumed, and millions of people returned to the country and hundreds of thousands were displaced from their homes in the wake of war, drought and other natural disasters.

In addition, more than 2.6 million Afghans live legally abroad. Of course, this shift has continued so far and has identified Afghanistan as one of the world’s leading immigrants.

Government action regarding Refugees and Returnees

The issue of the return of refugees in Afghanistan has had a long history of 33 years since 1986, has operated from the Department of Returns of the Communist Regime Immigrants to the Ministry of Refugees and Returnees in the National Unity Government.

But due to the magnitude of the problem and the problems inside Afghanistan, none including the National Unity Government failed to provide the appropriate solution to the problem of displaced persons and immigration from the country.

The first responsibility of the Afghan government towards Afghan refugees in neighboring countries is to registered migrants and to achieve all the human rights and privileges that the international community has found for the refugees.

On the other hand, if the term of the card for the cardholder’s card expires, they will be renewed again so as to avoid the persecution of the police.

Although neighboring countries have agreed on this situation, but there are virtually many problems still in place,

On the other hand, it is the other responsibility of the Afghan government to provide the refugees who have returned from other country and internally displaced, provide water and housing, and provide their citizenship rights.

But, according to a recent report from the United Nations High Commissioner for Refugees (UNHCR), returnees who come from outside the country voluntarily and internally displaced from their main places are in life’s bad security and economic situation.

That increase could be a barrier to the return of refugees outside the country and a threat to returnees and internally displaced persons.

The current situation and plurality of returnees

For as much as of war and insecurity, poverty and unemployment and disadvantaged livelihood opportunities, the people of Afghanistan have been displaced from their homes. Also, the return of refugees from abroad one of the main challenges of the Afghan government. According to the Statistics Department of the Afghan Ministry of Refugees and Returnees, a total of returnees with evidence have returned at January to 20 June 2019 in Pakistan and Iran 3,669 by force 112,000 in 234 volunteers. On the other hand, the total number of internally displaced due to war and insecurity, etc., will only reach 346 thousand 94 people the during 2019 and 57 thousand and 148 people will return to their main neighborhoods during this year. At a meeting of the executive committee of returnees and displaced persons headed by the executive director of the Afghan government on the 16th July, the Minister of Refugees and returnees, Seyyed Hussein Alami Balkhi, told members of the committee about the winter aid plan, 95 thousand and three hundred and fifty families need help with a budget of $ 29.3 million. The report states that the international organizations cover 17,000 families, but there is no more money for more than 78,000 other families, which are needed in an amount of 375 million Afghanis.

Radio Azadi, a recent report quoted by Reza Bahir, deputy spokesman for the Ministry of Refugees and Returnees, reported that about 271,000 people live in displaced persons and returnees in the open or under the tent. Of course, in these two reports released by the Afghan government, only the open space and the winter needs of returnees and displaced persons have been noted.

About the health and safety, education, security, low economic income, food and drinking water are bad for returnees and what they want. In this area, so far, there has been an influential and multidimensional report from the government has not been provided.

The authority’s offices of the Afghan government may have prepared their policies for returnees and displaced persons, and whether their policies are being implemented. The reports of the poor state of returnees in the country indicate that the government is failing. We offer the following solutions for the immediate resolution of the problems of returnees and internally displaced persons.