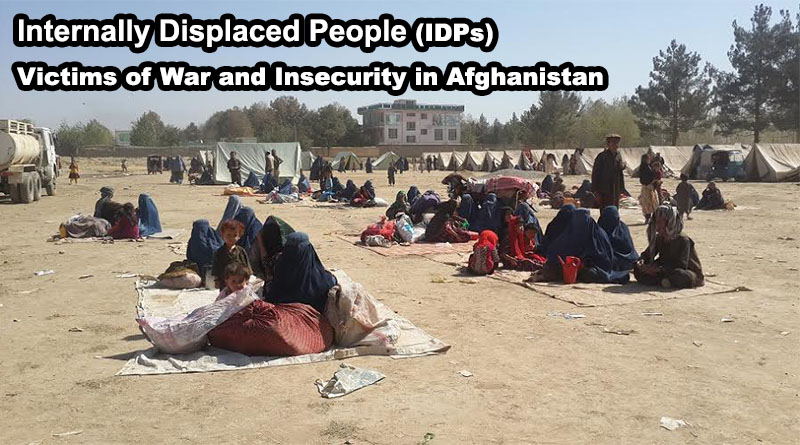 A report released last week by the United Nations Office for the Coordination of Humanitarian Affairs (OCHA) shows that the number of internally displaced people has raised to more than 6,000 since the beginning of the year, 58% of whom are children and 21% are women. However, in the (OCHA) report, war and armed conflict have been identified as the main cause of the increase in IDPs. Natural and drought events, poverty and unemployment crisis, poor economic situation and lack of investment in infrastructure are also factors contributing to the increase of IDPs in the country. According to a report by the Afghan Ministry of Refugees and Refugees, the total number of internally displaced people due to war and insecurity and other factors has increased to 346,994 since the beginning of 2019, up from 57,148 in the last decade. In the same year, he reported to their main neighborhoods.IDPs are the victims of the insecurity war, the endless migration of the Afghan people and the fact that peace is the solution to all Afghan problems. Weekly analysis this week about, you would read about the condition of IDPs in the country. Currently, Afghanistan is the second country in the world that have a large number of IDPs and the recent statistics show that in the past six weeks 57148 people were displaced in this country. Until now, the Afghan government has not implemented any constructive plan to improve IDPs situation in the country, which has led in their worsened condition. What is the condition of IDPs in Afghanistan?  What is the Afghan Government’s strategy towards IDPs? These are the questions answered in this analysis.

In its recent report, this UN organ has said the insecurity and the continuation of war in the country as the main reasons behind the intensified IDPs situation in Afghanistan. Besides the war, natural disasters, worst economic condition, poverty and unemployment and lack of investments in infrastructural areas are other factors that have played a role in displacing the people in the country. In the wake of civil war and conflict, and especially since the US invasion of Afghanistan, millions of people have been killed and injured, 8 million unemployed and blocking the return of millions of immigrants due to war and insecurity. Human beings, both men and women and children in this country, have not always been in migration to save lives from one place to another. According to a recent report by the United Nations Office for the Coordination of Humanitarian Affairs, the number of displaced people has been rising, given the number of IDPs in the first six months of the year, compared with the number of IDPs in the first six months. By 2017, it had risen 40 percent to reach 192,000 people.

In the meanwhile, the International Declaration of Human Rights states: “Everyone has the right to maintain the level of live, health and prosperity of himself and his family in areas of food, shelter, healthcare and required social services. In addition, everyone has the right to have a dignified livelihood while he loses the means of livelihood due to unemployment, illness, being aged, widow, and any other factor out of his will

Despite $ 4 billion in monthly spending and millions of other donor countries, the flare-up war is still waged by displaced people living in tents or out-of-water and out-of-school education. As recently quoted by Voice of America, a spokesman for the Afghan Ministry of Immigration and Returns, the total number of IDPs in the country has increased to more than three million and 778,000, 67 percent of whom are displaced by war and insecurity. And 33 percent have been displaced from their homes because of drought and natural disasters.

Immigration; the endless suffering of the Afghan people

However, the issue of natural migration goes back to the earliest stages of human life on earth, and human resources have migrated from one place to the other to cross the border in search of more opportunities. But in Afghanistan, the issue of immigration coincides with the onslaught of intelligence wars and armed conflicts with various factors such as strategic geography, unhealthy management, economic poverty and ignorance and illiteracy of the majority of the population for over four decades continuously. She had to migrate internally and externally to save her life.

On the other hand, with the end of the civil war, the collapse of the Taliban regime and the formation of a new system under the auspices of the United Nations, as the number of IDPs from 2001 to 2006 seemed to be improving, and hopefully declining. That the people of Afghanistan will be rescued from poverty and homelessness and achieve justice, prosperity, prosperity and peace. But since 2007, wars and insecurity have intensified so far, with the expense of foreign troops and troops in Afghanistan, foreign-born immigrants and internally displaced persons living in the country most in dire straits. Unfortunately, due to a lack of necessary foreign policy, overseas Afghan migrants are discriminated against, traded in host countries, expelled, forced to work, or sent to war pages due to unemployment and deprivation of citizenship.

For example: In a recent report, (OCHA) announced the deportation of 6,000 Afghan refugees from Turkey. On the other hand, an opposition organization in the latest issue of the Iranian Government has reported on the poor economic situation, unemployment and deprivation of livelihood of Afghan immigrants in Iran. The battle fronts are being sent to Syria and Iraq. While it is estimated that there are more than one million and 580,000 Afghan refugees in Iran, 53 percent are women and 47 percent are men.

The IDPs are also struggling with a number of problems due to the lack of a regular policy and proper adjustment of the state budget for internal migrants. However, on Tuesday, the US Embassy in Kabul announced $ 125 million in aid to meet the needs of IDPs, victims of natural disasters and returning migrants. But so far, only 27 percent of the funds needed for emergency aid have been provided. Taking into account the past and current displacement history of the Afghan refugees at home and abroad, it is clear that governments in Afghanistan have been unable to provide effective and credible foreign policy support to their migrants and nationals. And in their domestic politics, they have lacked the capacity and ability to provide security and employment for indigenous people. In this respect, not only can we not set a deadline to get out of the current disgraceful situation, but also the disappointment of the pain of displacement and immigration, as well as the suffering of our nation.

It has been four decades since our people have been homeless between the smoke and gunpowder of war, experiencing conflict and conflict with various domestic and foreign groups under different systems and with international cooperation, according to a UN report only. In the first six months of 2019, one thousand 366 civilians were killed by conflicting parties in Afghanistan. This indicates that as long as there is the evil of war and insecurity in the country, the expectation that the problem of refugees and IDPs will end is over. Because the continuity of war is creating new calamities every day, let alone tackling the long-standing problem of external migration or internally displaced persons.While the ninth round of US-Taliban peace talks will open in the next few days, our people have turned their eyes to Doha, the capital of Qatar. This will bring back face-to-face talks between the Taliban and the Afghan government, as well as a broader inter-Afghan dialogue for a just and lasting peace. Peace will not only end the problem of immigration and displacement within the country, but it will also provide a favorable environment for the slow, slow end of all the problems caused by the forty years of war in our country. For this reason, peace is our people’s priority and nothing can replace it.