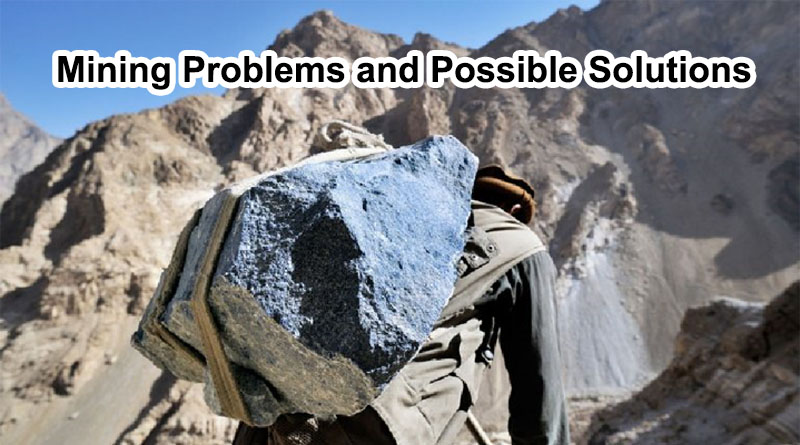 Mines are a part of the natural resources that are hidden underground and of great economic value. Afghanistan has 24 different types of mines and is considered one of the richest countries in the world due to untapped natural resources. Mining economy is one of the few options in Afghanistan for rebuilding the boom economy. Accordingly, political instability, insecurity, lack of a clear legal framework, governance and policy management, lack of infrastructure and transfer agreements with neighboring countries have hampered the development of the mining sector in the country. But the natural resources of the Afghan mining sector are still regarded as an alternative and a privilege for the country’s economy. In October 2017, the Joint Anti-Corruption Monitoring and Joint Independent Committee published an evaluation report on the existence of widespread corruption in the mining sector. So, in this week’s analysis: A quick overview of the mines, Mac recommendations, evaluation of recommendations, why corruption in this sector is rampant and what the solutions are.

The value of Afghanistan’s natural resources is estimated at US $ 3 trillion but in the 20th and 21st centuries the resources were not successfully developed. As Afghanistan’s natural resources are classified as out-of-date and stabilized, some research has been conducted in this regard. These studies show that Afghanistan has vast resources of metals, industrial minerals and construction materials, including iron, copper, and aluminum. Mines, forts, straw and zinc, gold, silver, molybdenum, sulfur, honeycomb, glue, chromite and others. According to estimated numbers, Afghanistan’s many other minerals include an estimated 2.2 billion tons of coal, 1.3 billion metric tons of marble, 30 million metric tons of copper, 1.4 metric tons of rare minerals and 2700 kg of gold. In the preliminary mineral research, 24 significant areas have been identified. The first step is to submit the bid.

In October 2019, the Independent Joint Anti-Corruption Monitoring and Evaluation Committee (MEC) released its Ministry-Wide Vulnerability to Corruption Assessment (MVCA) of the Ministry of Mines and Petroleum (MoMP). The original Assessment began with desk-based research in October 2017 and data collection activities took place from then until the end of July 2018, the original MVCA assessed the vulnerabilities in both MoMP’s internal operations and regulation of the extractives industry in Afghanistan. It included examining corruption vulnerabilities across each step in the mining value chain for which MoMP is responsible and developing practical measures to mitigate such corruption risks, including within entities beyond MoMP and across the whole of the sector. Based on findings from this assessment, MEC identified key areas of substantial vulnerability to corruption: 1) Rent-seeking behavior; 2) Weak Ministry governance and capacity; 3) Lack of Government accountability. For rent-seeking behavior, the MVCA report focused on issues affecting information about the country’s mineral reserves, Illegal mining, collection of payments of different Government agencies without authority, and political or other inappropriate interference in MoMP recruitment processes, leading to patronage, cronyism and nepotism influencing recruitment decisions. For weak Ministry governance and capacity, the MVCA team focused on poor coordination within MoMP and with other relevant agencies, lack of human, technical and financial capacity in Head Office and Provincial Directorates of MoMP, unclear or non-existence of necessary policies and regulations, weak legal frameworks to collect royalties, low salaries at MoMP, an unclear, lengthy and weak contract awards process and problems collecting production data. For the lack of Government accountability, the MCVA report focused on the failure to implement effective anti-corruption measures within MoMP, lack of due diligence in Government processes, lack of quality of internal audits, opaque and compromised contract negotiations, the limited opportunity for communities to contribute to effective monitoring of the industry and insufficient protections from and sanctions for inappropriate inspector behavior. The MVCA identified significant concerns in all three areas and issued 16 high-level recommendations for the MoMP and additional stakeholders. These general recommendations were further developed into 191 more detailed recommendations, based on SMART-testing by MEC. SMART-testing is MEC’s standard method of evaluating recommendations (or project objectives) based on assurance the actions and reforms would be Specific, Measurable, Achievable, Resultsoriented, and Time-bound.

Mauritius Madinasali, Anti-Corruption Monitoring and Evaluation Committee (MEC), says: “The law on mining is a matter of special importance at the local level, which will be based on the laws of mining contracts. Establish sufficient transparency in payments and enforcement, and everyone will be able to participate in the process of obtaining contracts and, under this law, the government, the international community and civil society can pay the contract. And monitor the exclusion of such miners that such a law is unique at the Asian level.

Why the amount of corruptions is high in mines?

Poor Monitoring: according to the report of the IWA about the mines in Afghanistan, the Ministry of Mines and Petroleum makes contracts only by the name and then does not supervise it, and as a result causes billions of Afghanis loss to Afghanistan.

Improper Management: according to the SIGAR’s reports, the US applied 11 projects in the Ministry of Mines most of which have not achieved their objectives that were mentioned above. If the Ministry of Mines had properly managed these projects, corruption would have decreased spontaneously. Meanwhile, the Afghan government has not conducted proper management that is why 1400 mines are currently being extracted illegally in the country, 710 of which are in Kabul!

The corruption in the Ministry of Mines and Petroleum can be prevented by taking these steps: