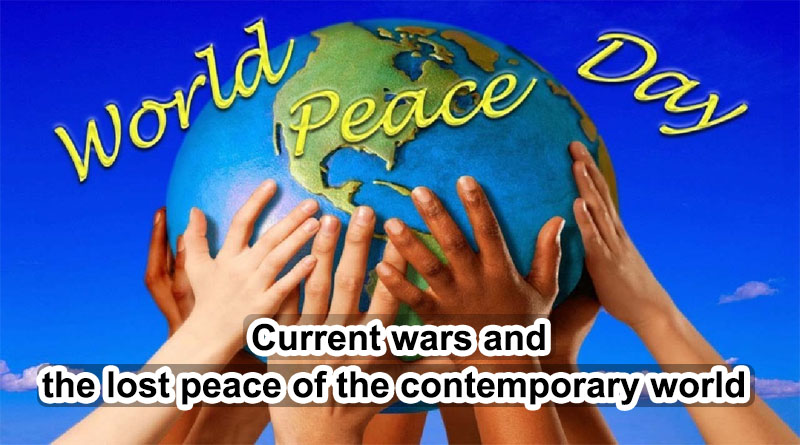 September 21st, coincides with World Peace Day. Peace is one of the oldest needs and aspirations of human society that is tied to the concept of security. Whenever we define security in its contemporary sense (especially the Copenhagen school), it is the absence of any threat that ranges from military threat to cyber threat. According to this definition of peace and security, in relation to other issues, in the twenty-first century and thereafter in the 21st century, there is a great danger and threat. This week’s analysis of the vulnerability of peace, the ongoing wars in the contemporary world, the aftermath of 9/11, and the need for peace in the world.

The Lost Peace of the Contemporary World

In a general sense, peace is a state of peace and security within one country and normal relations with other countries. But in today’s world these are not the only concepts that remain within the definitions. Because of their uncertainty and suspicion among their governments and leaders, they have consolidated their military power, which continues to lead to war and threats to peace. Of course, the world is not only threatened by war, but also by other things such as global warming and Arctic ice melting, fires in the Amazon jungle (known for its environmental significance, six earths), military intervention in countries to ” “Humanitarian Intervention”, Unequal Distribution of Facilities among Residents on Earth, Flood of Developing Countries to Developed Countries, Invasion on the Pretext of Violating Human Rights or Defending Human Rights, One State’s Supremacy over Other Countries, Terrorist Acts, Hunger, Poverty Unemployment, international peace and security are the two missing links in the contemporary world. To address these threats, humanitarian efforts represent a corner of their efforts to achieve peace and security, including the creation of the United Nations and the United Nations that put international peace and security at the forefront of their goals. As stated in Article 1, paragraph 1, of the Charter of the Organization, for the maintenance of the United Nations, “the maintenance of international peace and security.” The United Nations also adopted resolutions on peacekeeping and non-use of force to maintain its neutrality. But since the Cold War atmosphere ruled the world, many resolutions and declarations were not taken seriously. With the end of the Cold War and the start of a new world order aimed at suppressing terrorism after 9/11, international peace and security has become a victim of world countries’ policies, just as every community and country today, in terms of their beliefs, interests and goals, Define and act accordingly.

Current wars in the contemporary world

War is a term used to refer to the kinds of coercion and coercion that one state exerts over another state to force it to comply with its will. According to Clausewitz, the famous theorist “war is the continuation of politics by other means”. In today’s societies, war is caused by more complex theoretical and practical factors. How the war depends largely on the level of the industry. In the present era, war has posed a huge threat to humanity and civilization on earth. Because weapons, on the other hand, have become terrifying destructive powers and it is possible that limited wars can lead to the involvement of many governments. Since 9/11, there have been armed clashes between groups and governments around the globe, with increasing numbers of people preying on them every day. According to the Institute for Economic and Peace Research’s 2019 Middle East and North Africa (Iraq, Syria, Yemen, Libya, Egypt, Sudan, South Sudan, Palestine, Iran, Turkey, Somalia, Niger) areas where insecurity is relative to others The areas are overcrowded and have the least amount of peaceful space. The war in the Middle East and North Africa is not a new phenomenon but has been dragging its feet since the oil was discovered there. On the other hand, the dictatorial and puppet governments of the West have led people to revolt against their own governments, and they have sought to overthrow them in 2011 when unrest and riots intensified. The unrest, dubbed the “Arab Spring”, was essentially a popular uprising against the corruption and despotism of their governments. On the other hand, the instability that has arisen in different countries of the world, including the civil war insurgency in Afghanistan, the crisis in Venezuela, Ukraine, Pakistan, Myanmar, the Congo … etc., most often lies in the hidden hands of the great powers. . In fact, the unity of allies and the emergence of new allies through forced or voluntary means or changes in their foreign policy to succeed in competing with each other are causing unrest in these countries. While the big countries are seemingly international peace and security advocates and human rights editors, there are some implications that the barriers to their interests have not been met and justify their rape. The question is, who benefits from the ongoing wars, while humanity is averse to war as a whole? If there is no war, countries will not have to buy weapons from the great powers. Security companies and factories for chemicals and chemicals need to create an excuse to sell their products to sell their products, so they plan wars around the world that will give the government more tax and budget. Governments are growing and they are also making billions of dollars. Such companies exist in most countries around the world, and the only 6 arms companies that sell the most weapons are the Americans who make the most of the wars in the world.

Casualties and damages of war after September eleventh

According to the Institute for Economics and Peace’s assessment in 2019, of the 163 countries in the world, 76 were unstable, with Afghanistan ranked first in the rest of the world, followed by Syria, South Sudan, Yemen and Iraq. In 2014 alone, more than 330,000 people were killed. That represents a 287 percent increase since 2006. The highest death toll in the Syrian civil war was in 2014, with an estimated 18,000,000. To illustrate what disaster has brought to humanity in the absence of peace, let’s take a look at some of the world’s current wars:

Although the history of the current war in Afghanistan goes back more than 40 years, the ongoing war between the government and the Taliban since 2001 has caused considerable damage to the Afghan people. Victims from both sides were killed in the war, but civilians were the most victims. According to the Watson Institute estimates, from 2001 to 2015, 111,000 were killed in the Afghan war. According to Mr. Ashraf Ghani, 28592 military and police personnel were killed between 2015 and 2018. The economic cost of the war with the Afghan government has not been calculated, so we have to cite research from Oxford University scientists. The overall estimate of the economic cost of the Afghan war is $ 5.1 billion annually, while the country’s development budget reaches $ 4.5 billion. The Taliban use a variety of tactics in their warfare, including roadside bombs, car bombs, rockets, night-vision and laser equipment that provide military equipment to the Taliban in Iran and Russia, and in some cases provide weapons to Afghan forces through clashes. Most of them are US weapons and later used on the battlefield against Afghan troops themselves. Afghan forces also use advanced weapons that few of them are equipped with and are used in special operations. But in order to suppress the Taliban in their areas of control, they use air bombardments and military wings, which are also targeted by the inaccuracy of some civilians.

Yemen War From 2015 to present Yemen war There are different versions of the story; The first story: The war is with the Housie; The second story: The war is north and south; Hunger-stricken; from 2015 until now, a series of reports by French military intelligence revealed that Saudi Arabia and the United Arab Emirates are using US and French weapons in the Yemen war. That includes tanks, laser weapons, missile systems that Saudi Arabia and the United Arab Emirates purchased exclusively for self-defense from France and the US, targeting civilians. In addition to purchasing guns from the US, France and the United Kingdom, they have purchased tracking systems from Sweden, marine rockets from South Korea, Italian warships, and rocket-propelled grenades from Brazil. Of course, the role of the Housie was also evident in the killing under various titles and in different ways, killing thousands of Yemenis. So far, more than 70,000,000 people have been killed in the Yemeni war and the cost of the war in Yemen has reached $ 14 billion.

Syria’s civil war has been ongoing since 2011. This conflict between the opposition and supporters of Bashar al-Assad’s government was fought, but later external interference made it more sophisticated. At least 480,000 people were killed in the war, a Syrian human rights watchdog reports more than 100,000 casualties, with another 400,000 dead or missing. There are 5.6 million displaced people outside Syria and 6 million internally displaced. In addition to religious militias, the government of Bashar al-Assad used deadly weapons from Russia, Iran and other countries. According to some statistics, $ 685 billion has been spent on the Syrian war.

Overall, the war raged from 2003 to 2018, from 2003 to 2011 when an international coalition led by the United States and the United Kingdom invaded Iraq. And with the withdrawal of troops from Iraq, the civil war followed by the rise of ISIL in Iraq caused a continuation of the war. In this war, 182,000 people were killed in direct war, but the total number of casualties is directly and indirectly hundreds of thousands, but the number the casualties of the war are unknown, with more than one death toll. Most of the victims of the war have been killed by airstrikes, mortar shells, shootings, suicide attacks and improvised explosive devices. It needs $ 100 billion to rebuild Iraq. As can be seen, most of the wars after September 11 are unfortunately located in the geography of the Islamic world and its victims are the Muslim people and the Islamic countries.

In today’s world, especially the Islamic world, more peace is needed than ever. These wars are fueled mostly by those who are renowned in the modern world. But unfortunately modern humans live in only one part of this globe, which is largely peaceful, while another part of the globe burns in the fire of war. By examining the current state of the world, we need peace more than ever, and to change that, human beings must adapt their interests and goals to all the needs and conditions of the world, and eliminate conflicts and reduce the gap between them. It must promote human values ​​and values, peace and friendship, tolerance and tolerance for future generations. The Western world must strive to provide a peaceful life not only for them but for all humanity.