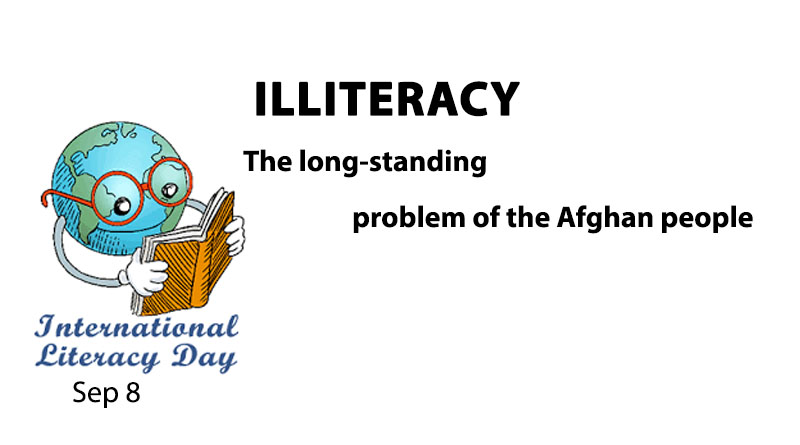 September 8, World Literacy Day, is celebrated all over the world as Afghanistan is read by the World Population Bureau with 38.2 percent of the world’s literate population, one of the three most illiterate. In a private interview, the Center for Strategic and Regional Studies received information from officials from the Ministry of Education and Literacy of the Government of the Islamic Republic of Afghanistan, that 60% of the country’s population of about ten million people is illiterate. At the same time, Dr Mohammad Rahimi, a deputy minister of education and spokesman for the Ministry of Education, said that of the 9.4 million students in Afghan schools, 3.7 percent had dropped out of school.While the illiterate figure in the country has been reported to be ten million for many years. Ministry of Education spokeswoman Nooria Najrabi says that by 2030, 60 percent of the Afghan population will be literate. He also says that most of the Afghan government’s budget allocation for this year, which amounts to 38 billion Afghanis, is usually allocated to the ministry.Why our country still has a high illiteracy rate? In this issue the analysis is discussed.

Literacy, the necessity of human society
Literacy, considered to be the most essential and essential part of human societies, literacy has always been emphasized by divine religions and intellectual religions, as revealed in the sacred religion of the Prophet (pbuh). Islam has started reading, which is, of course, one of the basic requirements of literacy.
Illiteracy in today’s world is hated by nations and governments as an inhumane phenomenon, and everyone is trying to remove the problematic virus from societies. China, although it is the largest country in terms of population, is about 96.4 percent literate, while Turkey is 96 percent literate. They make up 85% of Iran’s population with literacy. But if Afghanistan compares to these countries, it can be seen that the literacy process in this country has been far behind even those of neighboring countries. In fact, it was the foundation of Amanullah Khan’s literacy course in Afghanistan, which for the first time launched literacy classes at the time known as ‘Akabar’ for adults who were illiterate in Kabul under government supervision. Was. Adult literacy activities continued to be appropriate during the Shah’s reign even though Iran considered effective in a letter requesting the implementation of Afghan literacy programs and books in that country. But after the end of the Shah’s era, the Soviet invasion of Afghanistan, civil wars and Taliban rule in the country not only made progress in literacy but also began a negative movement. Following the fall of the Taliban government and the international community’s assistance in education and literacy programs, especially after 2008, the United Nations Resettlement Office (UNITED) and the United Nations Educational, Scientific and Cultural Organization (UNESCO) have also worked with various government agencies. Afghanistan, especially the Ministry of Education, has been working to raise the level of literacy in the country. The first phase of the literacy program was launched in 2008 with the assistance of $ 38 million from Japan and is also co-sponsored by UNESCO, KIR, UNICEF, the Red Cross and dozens of institutions. Other foreigners continue, but due to corruption, weaknesses in labor management, economic poverty, war and insecurity and Social chocolate, Afghanistan has so far failed to lower the level of illiterate graphs in this country even though it has the highest illiteracy after Burkina Faso and Central African Republic. As illiteracy has been a major problem for the well-being of our people, the lack of a well-organized, understanding and unified government administration has been a major challenge for the government and has been a problem for information networks in Afghanistan. In a special interview conducted by the Center for Strategic and Regional Studies with several MoE officials, there were inconsistencies in MoE officials’ presentation of figures. Dr. Sardar Mohammad Rahimi, deputy minister of education, said the number of active literacy centers this year increased to 6,000, with 60,000 graduating each year, but ministry spokesman Nooria Najrabi said the number of active literacy centers was 5219. Data show 2775 centers for women and 2444 centers for men report that there are around 100,000 people annually. On the other hand, the Department of Education’s budget allocation says about two percent of the Ministry of Education’s total budget, while a ministry spokesman reports 0.55 percent of the specific budget for education. As the National Bureau of Statistics reported in its 2018 literacy activities.This is not the first time that these agencies have submitted contradictory reports, but the Ministry of Education announced in 2009 that there were 11 million illiterate people in Afghanistan, which would reduce illiteracy in Afghanistan by 2020. While there have been no significant changes so far. Also in 2016, the Minister of Interior announced 15,000 literacy centers across the countries, which are estimated to be around 500,000 people with literacy training, with between 300 and 350,000 graduating annually. Officials at the Ministry of Education in 2012 had announced the number of illiterate people in the country at 10 million. But the Minister of Education in 2014 spoke of the literacy of 5 million people, adding that there are now 7 million illiterate in the country and that half a million people enjoy literacy benefits every year. According to these figures, we should have had at least 5 million illiterate people this year, but that is not the case. When it comes to the literacy figures provided by the responsible authorities in the last decade regarding literacy, they are found to be unaware of the statistics provided in this area.