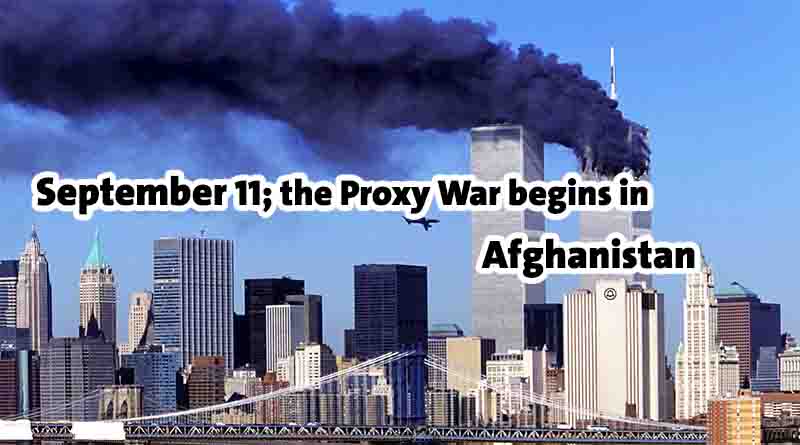 7 October 2001, the US forces launched massive attacks on Afghanistan to overthrow the Taliban regime and to eliminate the bases of Al-Qaeda in Afghanistan, however, up to date Washington’s war in Afghanistan is not finished.

In the past eighteen years, this war has gotten the lives of tens of thousands Afghans and is still continuing to cost lives. The Taliban’s defeat in 2001 was a temporarily downfall and the Taliban are now stronger than the past. Insecurity has extended from southern Afghanistan to the north and the Afghan government does not have control over a great part of its territory.

After September 11th, why start war in Afghanistan?

During the Afghan Jihad against the Soviet Union in Afghanistan, thousands of Arab fighters were fighting alongside with the Afghan Mujahidin, later the Mujahidin government, under Ustad Burhanunddin Rabbani, gave refuge and even Afghan citizenship to them. Later-on, when the Taliban seized control of more than 90% of Afghanistan, some Arabs, including Osama Bin Laden and some of his other friends, resided in Afghanistan, and gained Taliban’s support after 1996.

After the 9/11 incident in the United States, the Al-Qaeda members were accused of being involved in it and the US attacked on Afghanistan and with the overthrow of the Taliban regime a bloody war was erupted in the country. At that time, Osama Bin Laden resided in Afghanistan and, therefore, on 20 September 2001, President “Bush” specified few points to the Taliban:

The Taliban government at that time, through their embassy in Pakistan, stated that the US has not provided any kind of documents proving Osama Bin Laden’s involvement in 9/11 attacks. According to the Taliban’s Ambassador in Pakistan Abdul Salam Zaief, the Taliban government made many efforts to investigate about the incident, but the US was not willing to reconsider its decision to not attack on Afghanistan, he says that, the 9/11 attack has not happened suddenly but the US, in order to secure its long term interests in the region, wanted to have military presence in Afghanistan even before that. The Taliban suggested Osama’s trial for three times which were rejected by the US one after another.

The US began its airstrikes on Afghanistan on 7 October 2001, and on 31 October, the Northern Alliance forces, with the support of the US airstrikes, entered Kabul and overthrew the Taliban regime. The Bonn Conference on Afghanistan was held on 25 November and, after 10 days of discussions, an interim Afghan government under the leadership of Hamid Karzai was formed.

The legal basis of the US attack

The Resolution-1373 has labeled “terrorism” as an international issue and had emphasized to support the people of Afghanistan. In the Resolution-1386, it was mentioned that the ISAF will be involved and it will stay in Kabul and nearby surrounding areas for keeping security and peace, but the resolution was signed on December 20 of 2001-weeks after the US attack on Afghanistan.

The UN charter, which is signed by the US and its allies, states that all members of the UN shall express their statements for peace seeking objectives and none of the UN members shall use military forces except for defensive purposes. , in the article 33 of the UN law it is mentioned that “The parties to any dispute, the continuance of which is likely to endanger the maintenance of international peace and security, shall, first of all, seek a solution by negotiation, enquiry, mediation, conciliation, arbitration, judicial settlement, resort to regional agencies or arrangements, or other peaceful means of their own choice.” But the US, from the moment that 9/11 incident occurred till its attack on Afghanistan, banned all the ways of reaching a peaceful solution.

In addition, the US constitution reads that international treaties such as the UN charter is approved by all the countries including the US and is part of the US supreme law.

On the one hand, there was no Afghan involved in the incident of 9/11; nor the U.S. was able to provide evidences about the people who it claimed to be involved in the incident, even up to date the evidences, which Collin Powel had promised to provide, is not released. So, the question is why did the U.S. attack a country that, if the US provided evidence of Osama’s involvement in the incident to it, was not only ready to try Osama in the court, but was also ready to hand him over to the US? But, since Washington did not have such evidence, the Taliban’s suggestions were immediately rejected.

The US attacked Afghanistan based on the article 51 of the UN charter that gives the right of self-defense. Since there was neither any Afghan nor the Islamic Emirate of Afghanistan involved in the 9/11 incident and also the Taliban were ready to hand Osama over if evidences of his involvement was provided to them, it did not mean that the United States had been threatened by the Taliban government.

Current war Fatalities in the country

In 1996-2001 years, on the one hand, Afghanistan was isolated in the world’s politics and the Taliban’s regime was merely recognized by three countries and, on the other hand, the country was in worse situations of education, economy and governance.

After the formation of interim government, under the leadership of Hamid Karzai, in 2001, international community’s aids infused in Afghanistan, reconstruction started, millions of Afghans went to schools and universities, and Afghanistan established diplomatic relations with more than 100 countries of the world.

Although, in 2001, the ISAF forces entered Afghanistan with the slogans of maintaining peace, fight against narcotics and assisting Afghanistan, but 15 years after the presence of the US and other western countries in Afghanistan, besides widespread insecurity, the country is the largest supplier of drugs in the world and produces 90% of world’s illegal drugs.

After 18 years, the country is dealing with plenty of challenges. Due to worse economic and security situation, Afghans are leaving the country. In 2015,2016,2017 and 2018, more than 250 thousand Afghans took hazardous paths to Europe and thousand others were internally displaced.

In the past 18 year, the way is paved to moral decay in the country and the media which is believed to be the sole achievement of this government, is broadcasting without taking Islamic sharia or Afghan traditions in consideration. Corruption in the government administrations is reached levels that Afghanistan is now among the most corrupt countries and, in addition, ethnic and sectarian discrimination is also inflaming.

After 15 years, still the Afghan government and security forces are dependent on the US and the NATO members.

Although, apparently the US attacked on Afghanistan to suppress Al-Qaeda network and the Taliban, but the US was pursuing its long term interest in the regions. If, the Taliban’s refusal of handing over Osama to the US was the sole incentive of the US attack on Afghanistan, the US would have left the region when Osama was killed in Islamabad. Some analysts believe that the US’s interest in the regions is the encirclement of its rivals China and Russia which this country has not yet achieved and still the US is far away of the Central Asia’s resources.

Now, after 18 years from the US attack on Afghanistan, the US’s only achievement is that war continues in Afghanistan and the US has kept its military presence in the region. If the international community wants to resolve the issue in Afghanistan; the only solution for Afghan issue is that the Afghans must be allowed to make their efforts for national reconciliation and resolve their issues among themselves.

America must make up for all its shortcomings in the past 18 years by bringing a just and lasting peace to the country.