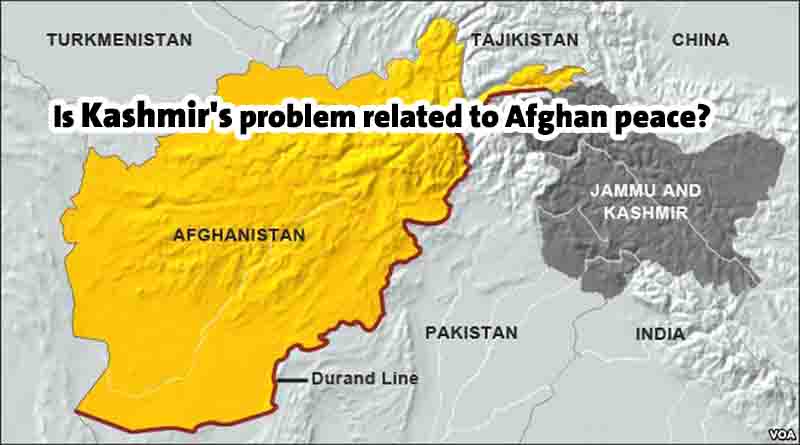 Current Government of India, led by BJP party leader Narendra Modi, has been in existence for more than 70 years since last August in law 370 of the Constitution on Indian-controlled Kashmir, which gave special privileges to Kashmir. Were done, and destroyed as a free zone. The Pakistani authorities then called Kashmir’s problem linked to Afghan peace, whether or not the Kashmir issue was directly related to Afghan peace. These are analyzed in this analysis.

A quick look at the Kashmir crisis

After India and Pakistan gained independence from the British Empire after 1940, the two countries claim that Kashmir is part of the country, two of the three wars waged with each other over Kashmir. About seventy thousand people have lost their lives. There are more military forces in Kashmir than in other parts of the world, and local Kashmiris are again strongly opposed to the presence of Indian forces and support those who stand against Indian forces.

Put down of Article 370 and the present situation of Kashmir

On August 5 this year, after 70 years, India abolished Article 370 of the Constitution which gave special privileges and powers to India-controlled Kashmir. According to this article, Kashmir was an autonomous region under Indian control. Residents of other parts of India could not buy land here. People of this region had their own constitution and their own special flag. But in the areas of defense, foreign affairs and communications, again under the official influence of the Central Government, after the expiry of this Article, Kashmir was chosen as the other Indian state, now people of other states can buy land here and there. Raise capital, and his special status is over. Now a large number of Indian forces are stationed there, banned and many political leaders and protesters have been arrested. Former Kashmir Minister Omar Abdullah called the Indian government a unilateral decision to abolish the article, and the current minister, Mehbooba Mufti, who closed the house after the expiry of Article 370, made August 5th a dark day for Indian democracy. The current ruling party of India has drawn sharp criticism. According to international newspapers, Indian forces have tortured a large number of people in Srinagar, telephone and internet services have been shut down, health centers are closed or low-level services, educational institutions are closed and the day-to-day is on the verge of collapse. The series continues.

Kashmir problem from a global perspective

Turkey and some other countries, including the Organization of Islamic Cooperation, have reacted seriously to Kashmir, Pakistan has again complained to the international community to stop the persecution of Indian forces by oppressed Kashmiris. At the 42nd session of the Geneva Convention, Pakistani Foreign Minister Shah Mahmood Qureshi spoke on the Kashmir problem and informed the world of India’s excesses and harassment that India had rejected the claims altogether. India again says this is an internal issue and does not give anyone the right to comment or advise on this, claiming that Indian forces have full respect for human rights and only prevent separatists and eliminate Article 370. Taking it as a step forward for the Kashmiris and the country as a whole. Pakistan then views India-occupied Kashmir as an abusive territory occupied by India and asserts itself as a right, and has called for the support of the international community, including China, Turkey and Islamic countries. Other than China and Turkey, the problem of Kashmir is considered as an intermediate problem between Pakistan and India and calls on both countries to find solutions.After the UAE government took India’s step, the Indian Prime Minister also delivered a high-profile sign to Mr. Modi, which again triggered severe backlash in Pakistan, and the Sheikh of the United Arab Emirates did so in favor of oppressed Kashmiris. Noted the great and unforgiving cruelty and excesses.

The Pakistani authorities’ claims that the Kashmir issue is related to Afghan peace are largely baseless, with Shahbaz Sharif speaking to Pakistani officials about the Kashmir problem linked to Afghan peace and Imran Khan. He blamed his deal with President Trump on Kashmir in the fight against Afghan peace, not only because it was rejected by Prime Minister Imran himself, but because Trump’s remarks on Kashmir were the result of South Asian economic development. Selected part. And secondly, the problems of Afghanistan and Kashmir historically have nothing to do with each other, because in the Kashmir issue, the people of Afghanistan have always expressed their hope of ending the calamity that has started with the oppressed Kashmiris. These reckless allegations by Pakistani authorities not only said that India was a baseless desire to diminish the influence and attract international attention, but also failed to do so. The oppressed Kashmiris should be set to decide their own fate, and the international community should take bold steps in this regard and let other oppressed people of Kashmir have a dark future.

There is no denying that instability in each country can affect the respective regions indirectly and indirectly, but as Pakistani officials directly link the Kashmir problem to Afghan peace, it is only in the two neighboring countries. As such, it can help to break the ties between Afghanistan and Pakistan. Because the Kashmir problem is one of the most complex problems that have been ignored from the first time, but unfortunately India and Pakistan want to exploit Afghan tensions in the Kashmir problem and make Afghanistan their competition. It is not acceptable to the Afghan people at any cost.

India and Pakistan’s erroneous policies on Kashmir, like the region and the country of Afghanistan, which have no access to the sea and its trade with India, which is conveniently done through Pakistan, also face unknown fears and fears. And while Pakistan has recently taken the necessary steps to facilitate Afghan traders and rebuild their economic stability, it is feared that the Kashmir problem will hamper these developments, giving them peace and stability among regional traders. Concerns have been raised, but on the other hand, it could do more harm to Pakistan than it does to economic problems, as Afghanistan now has other alternatives to Pakistan for its economic development so that Afghan traders can use it. Conduct transactions through those alternatives.

If the US does not allow both Pakistan and India to benefit from destabilizing the region and using Afghanistan as a competitive arena, this could impede regional security in the future. And on the other hand, China, which favors Pakistan in the Kashmir issue, should exploit its strategic and regional role to bring both India and Pakistan to a permanent solution to the Kashmir issue, so that the oppressed Kashmiris are persecuted and helpless. Local killings are over. If China does not do so, then China’s major economic projects, such as CPEC and One Belt One Road, could also be a major hurdle, as China’s major economic projects could be implemented in the region. Security is very important.

The assertions by Pakistani officials that the Kashmir problem is related to Afghan peace are largely baseless. And the problem of the oppressed people and Muslims of Kashmir, which has been going on between Pakistan and India for the last seventy years, must be worked out to find a permanent solution to it, and the rest should be left to the area which is economic, cultural and cultural. It is historically of special importance to be exposed to the malicious politics of both countries. The Organization of Islamic Cooperation, the international community and the Islamic countries in particular should listen to the voices of the oppressed Kashmiris and silence them further and their rights should be paid special attention to, and not just because of this work. The beautiful Kashmir region will be relieved of ongoing unrest, but the region, and especially the Afghan peace process, which Pakistani officials are doing, will end, and Afghanistan will reach a lasting peace in the near future.