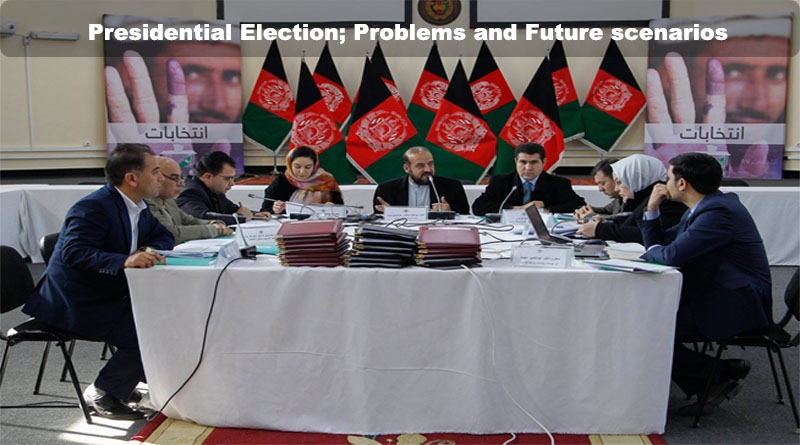 The fourth round of presidential election after falling of Taliban Regime in Afghanistan was conducted throughout the country, and Afghans voted to elect the third president since falling of the Taliban regime in 2001. The polls opened at 7am local time (2:30 GMT) and are scheduled to close at 5pm (12:3 GMT).

After technical problems delayed the opening of some polling stations around the country.  That reason Voting was extended by two hours, Preliminary results are not expected before October 17, and the final results will be announced on November 7.

The election witnessed some difficulties as well. According to the reports, large number of complaints has been submitted to the electoral complaints commission, and the military institutions also spoke about several attacks on the polling centers and casualties of tens of Afghan security forces; Yet despite all these problems, people participated in the elections   Overall, this election was organized and transparent compared to the previous parliamentary elections. But in spite all of that the participation of the people had increased comparing with previous elections. Given the technical and operational difficulties in the election process, how much was the public participation in the election, and what would be the future scenario? These are the questions that have been tried to answer here.

Overview of the Election Process

The elections were originally scheduled for 20 April, but the Independent Election Commission announced on 26 December 2018 that they would be postponed until 20 July, in order to resolve problems that became apparent during the October 2018 parliamentary elections. The additional time will be used to verify voter lists and train election workers on the new biometric identification system. On 20 March 2019, the IEC once again delayed the election, this time by two months from 20 July to 28 September. A spokesman blamed the delay on changes in election laws along with management and technical problems, following the presidential Legislative Decree of President Ashraf Ghani, the commissioners of the electoral commissions are removed. Instead, in March 2019, a new 12 commissioners were appointed to hold the presidential election under their management. What started two months ago as an 18-candidate presidential race has now turned into a final line-up of 13 candidates? Mohammad Hanif Atmar, one of the 18 presidential candidates, was dismissed because of internal dissent on the team and announced a withdrawal from the election a few days ago, but four other candidates, Shaida Mohammad Abdali, Zalmai Rassoul, Ibrahim Alkozai and Noorulhaq Ulumi joined the state builder team led by Mohammad Ashraf Ghani.

In the September 28 election, there were 13 candidates to final line in total, There were 13 candidates in the September 28 election, with more than 100000 domestic and international observers being appointed for the election. Among them, 30000 supervisors were Mr Abdullah and another 30000 Mr Ghani. Also representatives of civil society, members of commissions, representatives of independent agencies, UN, US, UK, Iran, ambassadors of the region and neighboring countries were overseeing the process.

The challenges and Problems of Election Day

Security problems: Presidential elections were held in Afghanistan at a time when wars between the government and the opposition had intensified. The Taleban had urged people to refrain from participating in the elections and threatened to do everything in their power to disrupt the process. Interior Minister Massoud Andrabi and Defense Minister Asadullah Khalid said at a press conference that they were able to hold the fourth round of presidential elections in relative peace across the country, saying they were opposed by the government. The highest risk was in Takhar, Logar, Kunar, Paktia, Paktika, Jowzjan, Faryab, Kunduz and Kandahar provinces. Meanwhile, reports of insecurity and explosions were also reported in Baghlan, Badakhshan, Ghor, Faryab, Ghazni and Kabul. Acting interior minister says two policemen were killed and 37 civilians were injured, including three soldiers, in attacks on anti-government militants. The Election Commission presented 7300 centers to security organs that would hold security but 4942 were open on Election Day, the rest of which reached 2358 due to security threats, closed on Election Day, It makes up 30 percent of all centers

Technical and operational problems: In areas of the country, including Kabul, where the security situation was relatively good, significant numbers of people did not participate in the election; but another major problem in these areas was the election commission’s managerial weakness. In many areas, the centers were delayed, leaving the election period to two hours, Voter lists were also sent to one site rather than to the other, which caused many people to cast their ballots because of anonymity and could not be registered in the system if they used the ballot. Problems with biometric machines and not working properly or the use of biometric machines were not understood by the Election Commission staff and other similar issues which made the process challenging. The Transparent Election Foundation of Afghanistan (TIFA) says the biggest challenge ahead of the election is the absence of voter names in the so-called and biometric machines. According to the agency, 88% of the polling centers in 34 provinces faced this problem and people did not vote. The administration adds, in some provinces, there were no names in the voter list, another was the difference between the voter population and the nomination at one center, as a whole, Ghazni’s refugee town health center registered 380 people in its list, but 2,500 people were referred to the center, saying they had registered their names for the election.

During the campaign, both government teams campaigned at the highest level to win the election. The reason why they were able to campaign at this level and other candidates were probably not because of using government tools and Abuse of competence, And now both sides said to get the majority voted of the election, But if one side does not win a majority in the first round, then in the second round these two tickets will be combat. But only the election box will determine the future president of Afghanistan? Looking at the past seems impossible, the strong possibility is that the results will be delayed first, and then the results will be inconsistent, And as a result the White House will make the final decision, If the US is truly committed to peace in Afghanistan, It will, however, make the way for a transitional government, And if the White House is not committed to peace, So it is very likely that some kind of coalition government will be formed again.