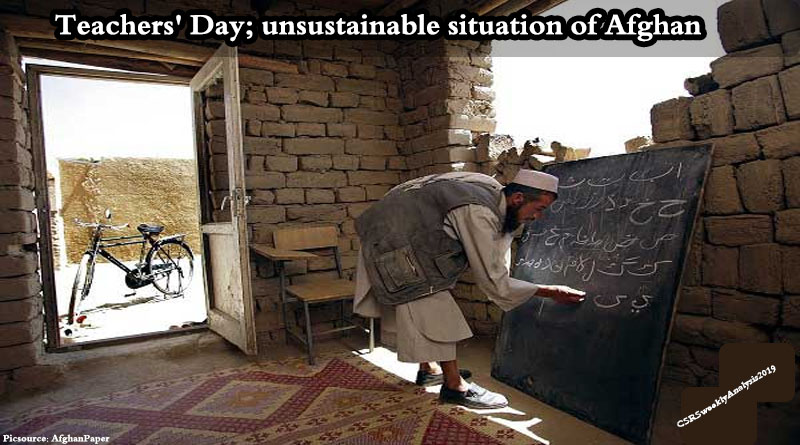 World Teachers’ Day, also known as International Teachers Day, is held annually on October 5. Established in 1994, The 44 convocation ministers of education with 135 member states held in Geneva from October 3 to 8 suggested then UNESCO Director General Federico Mayo to be named teacher one day. Day represents a token of the awareness, understanding and appreciation displayed for the vital contribution that teachers make to education and development. Ideally, Teachers’ Day will be internationally recognized and celebrated around the world and on this. Teacher’s Day is celebrated annually in Afghanistan by many people and government officials, while the majority of teachers complaining about their lives. On the other hand, nearly 18,000 schools are run by 220,000 teachers, 34% of whom are women. The situation of teachers in the country, the government’s promises to improve the quality of life of teachers, and the factors that worsen the status of teachers in the country are topics discussed in this week’s analysis.

Current situation of teacher’s in Afghanistan

The Prophet of Islam (PBUH) prides himself on being a teacher, and scholars regard the teaching and learning of the duty of teaching as the best, most sacred, and purest human duty in the world, Imam al-Ghazali identifies a teacher as one who infiltrates and gives life to the human heart and soul, The mission of education in contemporary societies is also recognized as the most universal human occupation, as cultural growth in free and civilized societies is realized through education. Thus the beginning of the formation of a society, guaranteed by the freedom, authority and consciousness of the teacher’s work, begins to guarantee the identity of the nations. But despite this high rank, unfortunately, Afghan teachers face numerous social and economic problems; we introduce a number of them here:

Social problems: As it was mentioned, in advanced societies teachers have special status and have the best social status as the most prominent person. But in Afghanistan, the true dignity and status of teachers are not recognized and, like other poor people, in many places, they hasten the way to teach students outdoors or under tents. They are also sometimes insulted and threatened by their students and parents of students in terms of social status and valuation between people and society. For that reason, there are a number of disgusted teachers and some are ashamed to say that they are acting as teachers.

Financial problems: If the economic situation of teachers in Afghanistan is examined, Teachers in this country are found not to have the most basic means of living and are at least part of the poor or middle class of the society. If the livelihoods and accessibility of teachers’ livelihoods are taken into account when compared to neighboring countries and the world, it can be seen that no dimension was comparable; Teachers in the country are suffering from poor economic and livelihood problems, Teachers in Afghanistan receive between 6,000 and 14,000 Afghanis ($ 75 to $ 160) per month salaries, But in Iran, despite the West’s economic blockade, a teacher’s monthly salary is between $ 300 and $ 600. Teachers’ salaries in the United Arab Emirates (UAE) are usually between $ 2,500 and $ 6,000 per month, and monthly salaries for teachers in Saudi Arabia, Qatar, Oman and Bahrain are close to the same of UAE. The lack of facilities, low salaries, inadequate teacher status and social value, and the existence of corruption in the recruitment of teachers have made graduates and teachers not accept teacher responsibility. In addition, the existence of corruption in the education sector has endangered the lives of teachers, impeding their progress and promotion, Based on the findings of the Independent Joint Anti-Corruption Monitoring and Evaluation of published in 2018, Imaginary teachers reported that about 50 percent of teachers without higher education said that a large proportion of teachers were unprofessional  and unskilled. A spokesman for the Afghan Ministry of Education also reports 60,000 unprofessional teachers work in ministry of education. Unfortunately, the Ministry of Education has failed to take effective steps to improve its strain. It is natural that a disabled teacher can never make a capable student to bring positive change in society.

The fate of teachers in Afghanistan has long been a victim of greedy promises by upper level officials and officials in the country. For example, the problem of land distribution, which is one of the most promising time-holders for the teacher community, has not been resolved yet, However, Nooria Nezhat, speaker for the Afghan Ministry of Education in connection with the call to the center, says that since 2007, 92,000 land have been distributed to teachers in 27 provinces, But due to teachers ‘inability to build homes on land given by the government and teachers’ complaints, the process has now been halted.

While national unity government leaders speak of education and cooperation with all government bodies in education since the school year began ringing in school every year, President Ashraf Ghani reiterated his promise to teachers at the start of the 1398 school year. The pledge had been deposited, but unfortunately, no progress has been made in practice. For example, the President had said in 2015 that he would solve the housing problem for teachers within six months, and at the beginning of this year, he insisted that he would make a final decision on the housing problem for teachers in the next three months and examine the salaries of teachers. Is still on the agenda, but until six months later, there is no news of the fulfillment of these promises, Not only did the salaries not increase, but even the salaries of a considerable number of teacher’s were delayed

Here are some of the key factors that lead to the right of teachers to be abused and oppressed in the country:

Weakness of management: Although significant progress has been made in the field of education since 2001, there has been considerable progress. But in terms of quality and low level of education, the existence of corruption, the existence of imaginary and inexperienced teachers, and the neglect of teachers’ status cannot be attributed to the mismanagement and supervision, the lack of executive capacity, and the inattention of officials in the education sector.

Political instability: Leadership has fallen victim to political instability in the country, and individuals are assigned to leadership positions on the basis of quota and political relations. Due to the lack of adequate, socially and regulated livelihoods, teachers are also forced to say dead, windy, in the hope of getting a job or a better life, while the teacher’s field of activity must include his or her school and classroom. Okay, not somewhere else.

Security Threats: War and insecurity are one of the major challenges facing teachers in Afghanistan. Repeatedly, teachers have been targeted and schools have been targeted. Armed groups, who consider themselves educators, self-monitor teachers’ schools and control, to the extent that they in some areas are forced to pay teacher royalties or force non-performing duties.

No side to defend the rights of teachers: Lack of unity and coherence among teachers another challenge facing teachers has been seen many times when some teachers in a corner of the country are going on strike or meeting to address the challenges, their voices are not heard properly. The formation of the Herat Teachers’ Union is a good experience in this field and should be expanded. Because there is a need for a solidarity between teachers of a national union and Afghanistan to reflect their voices and defend their rights.