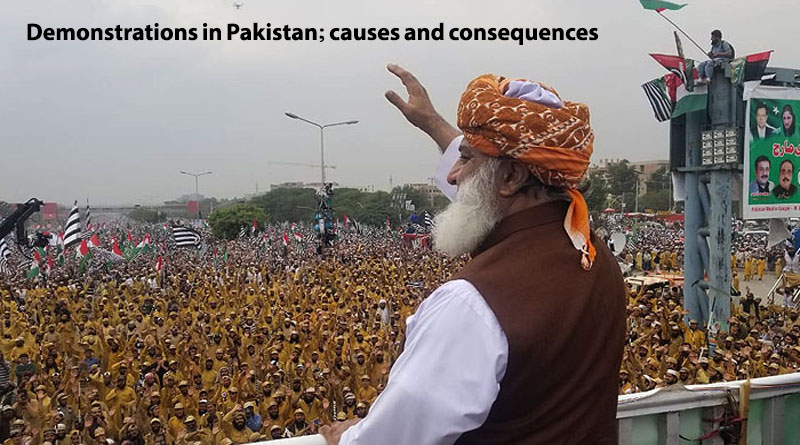 Jamiat Ulema-e-Islam (F) party Starting their rallies in the southern city of Karachi on October 27, anti-governmen(against the ruling party; PTI) protesters marched through various major cities of the country, finally reaching their destination, Islamabad, on October 3, People from other places like Khyber Pakhtunkhwa and Balochistan also reached Islamabad for the rally. Who claims that Prime Minister Imran Khan came to power last year through rigged elections.”Prime Minister Imran Khan will have to resign, what are the reasons for these protests and resignations and what are the other demands of the protesters. What challenges and consequences do they have for the current government and for Pakistan as a whole?, In this analysis a comprehensive analysis was performed.

The Jamiat Ulema-e-Islam (JUI-F) party, led by Maulana Fazl-ur-Rahman, has long planned to hold widespread protests against the current ruling party, which eventually led to a massive wave of protests in the capital (Islamabad). Arrived October 31st, however, a large number of protesters have formed Jamiat Ulema-e-Islam Fazl-ur-Rehman faction and Awami National Party led by Asfandyar Wali Khan. But other opposition parties such as the PML-N, Nawaz Sharif, Pakistan People’s Party and Pashtun Awami Party leaders and supporters also participated in the protest. The Khyber Pakhtunkhwa government had said before the protest began that the protesters would not leave to go to Islamabad to protest, but the provincial government withdrew its decision, and the protesters arrived in the capital without interruption. On the other hand, Minister of the Interior, Ijaz Shah, before the start of the demonstration, said that the protesters will not stop, and will do whatever they can to facilitate the protest.

Brief introduction of the JUI (F)

In 1919, a party called Jamiat Ulema-e-Hind was formed against the British colonial and with the support of the Indian National Congress, and the formation of a particular country (Pakistan) for the Muslims in the subcontinent from this party. Jamiat Ulema emerges as a new party in the name of Islam, Under Mahmood during the 1960s the party “developed a strong presence” and base of support among the “intensely conservative countryside” of Balochistan and Khyber Pakhtunkhwa (KP). [4] Mahmood led the JUI against Ayub Khan’s modernization policies. In 1980, after Mufti Mahmood, his son Maulana Fazlur Rehman took over the leadership of Jamiat Ulema-e-Islam (F), which is still leading the party. The Jamiat Ulema-e-Islam (F) party has a Deobandi thinking and has many supporters in Khair-e-Pak and Balochistan. He has participated in coalition and joint governments with the Jamiat-e-Islami, Awami National Party and Pakistan People’s Party since 1980, and is said to have had close ties to the Afghan Taliban and has been expressing his support at all times and now he is. Pakistan Tehreek-e-Insaf Party has launched widespread protests.

Current and past protests; what is the different?

The current ruling party’s 2014 mass protests against the Pakistan Muslim League Party, which lasted about 126 days, in which the then ruling party chief and prime minister (Nawaz Sharif) were removed. The attack on Pakistan’s national television took place and caused huge damage to the country’s economy, But the ongoing protest led by Maulana Fazlur Rehman, whose attendance level has more than doubled since the 2014 protests, has attracted the attention of many people in discipline so far, for example the protestors on the ways and roads. Cleans it up during the demonstration, although there are no female participants in the protest, the protestors’ attitude towards the media workers have also attracted the attention of media and social media activists. But one thing that seems to be weaker here than the 2014 protesters is the reasons for the protest, the first participants were unaware of why they came to the protest, and appealed against their leaders’ comments. Or participated in Islam’s call for Islam, and later saw that it was forced to quit talking to the media. But almost every participant in the PTI’s 2014 protest knew very well why he participated in the protest and attributed the cause of corruption, economic turmoil and other necessary problems by the authorities.

The reasons for the protests

For the first time in the elections on June 25, 2018, the PTI has garnered a large number of votes at the country level, and has influenced influential parties such as Pakistan Muslim League (N) and Pakistan People’s Party (PPP) in Pakistan’s history. You have defeated me greatly; among them was the Jamiat Ulema-e-Islam (JUI-F) party, which has no seats in the current parliament and only four seats in the Senate, accusing it of some of the institutions that might mean military and intelligence agencies. The present ruling party was in the throes of victory, it also broke the silence of the military and asked Maulana to clarify about the institutions, but Maulana responded briefly and diplomatically with the military, not including the military. Apart from this, the economic turmoil of Pakistan, unemployment, the arrest of former political officials on account of accountability and the Kashmir case are the problems that led to the withdrawal of protests for this party. But Imran Khan, the ruling party leader, again alleges that Maulana is working towards the foreigners, especially India, and considers economic turmoil a legacy of the former government and hopes that it will work to strengthen the country’s economy. Meanwhile, Imran Khan has set up a committee headed by Defense Minister Pervez Khattak to hold talks with the protesters, which had its first successful meeting with opposition party committee chief Akram Khan Durrani last Monday, for Sikhs (minorities). Apart from opening Karthpur, under the Emotion Undergraduate Project, in the next four years, 200000 scholarships have been announced for the poor and this will probably be what the protesting party claims will help the ruling party. But the protesting party again demands that Prime Minister Imran Khan resign and new elections should be held in such a way that there is no military presence at the polling booths or else he will continue his protest and in the future. Will close all major highways in the country. But it is seen that the support of other opposition parties of the government with the protesting party seems to be related to their party interests, the participation of their supporters in the protest seems to be less. Although this may prove to be a good point for the protesting party to succeed in, it currently has little incentive for opposition groups to propagate to the current government against the protesters and propagate them further. Pushing and weakening can lead. Two reasons for the poor participation of opposition parties in the current protests are two reasons, one is that they have a certain position in the provincial assemblies and parliament, and they do not want the government to propagate against them when violence arises. And thus the existing civilian influence has also been lost and the other, the leaders of these parties has been imprisoned by the present government for accountability, wanting to impose pressure on the present government to impose pressure on their leaders (Nawaz Sharif, Maryam Nawaz). , Asif Zardari and others …) have been released from prisons so far for their PML-N supporters, Nawaz Sharif and Maryam Nawaz Sharif. The reef received the green light on the bail release. And on the other hand, there was also a protest from Maulana Fazlur Rahman, hoping that the support of the opposition parties (Pakistan Muslim League and Pakistan People’s Party) would be mobilized because their leaders were in jail and out of jail. Other parties, such as the Awami National Party and the Pashtun National Party, want to increase their influence at the provincial level by imposing pressure on the current government.

Challenges for protesters and ruling government

Supporting the military with the current ruling party, launching new economic projects, a protest by Maulana Fazlur Rahman against military agencies alleging widespread fraud in the last election with the help of the administration (military). Low participation of other opposition parties and initiating violence may have positive aspects for the current government that could better stave off the protesters and thus further their military support. But on the other hand, unemployment at the country, rising prices of basic goods and taxes, ex-government officials like former Prime Minister Nawaz Sharif, former president Asif Ali Zardari, former prime minister Shahid Khqan Abbasi, Maryam Nawaz and a number of other opponents. Keeping in prisons, imposing certain restrictions on media such as the drivers of one media program cannot participate as guest on another media or television, using inappropriate words against Maulana Fazlur Rahman is a challenge that may be present. The government is causing notoriety and extinction.

Protests against the ruling government are not new in Pakistan, and the series seems to be going against almost every government since the formation of Pakistan. But the current protests are led by someone who, on the one hand, has a special status and experience in the history of Pakistan, and on the other hand, relations with the Pakistani military and intelligence have always been good. The protest also damaged the country’s economy, disrupting the economic activities of the common people in Islamabad. If the protests continue and the government will stop expanding, it is not far away that the protests will turn to violence, and the current government may be overlooked. But if the current government seeks timely response to the protesters ‘demands, the protests may end, but the first protesters’ resignation of the prime minister and this seems unlikely, since the opposition parties have 156 seats in parliament and if they want to. To get a confidence vote from the Prime Minister, they need 172 votes

The only way that the current government may be overthrown and the prime minister resigning is to expand the series of protests that have yielded positive results so far in Pakistan, but this again requires military support, as military leaders. He also held a meeting after Maulana’s remarks on his administration and emphasized on the strength of the institutions, which could again be seen as a clear sign of support from the current government.