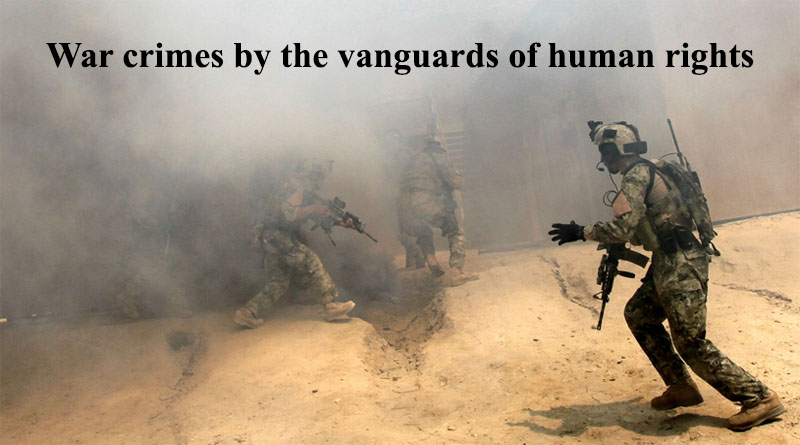 Since 18 years, the Afghan war has targeted civilians by parties involved in the war resulting in the death and injury of tens of thousands of Afghans. Air strikes and joint operations of Afghan and foreign forces have always caused a large portion of civilian casualties, In its latest report, Human Rights Watch observes that victims and witnesses in various provinces of Afghanistan say that the Afghan National Security Forces under the auspices of the US Central Intelligence Agency (CIA) have committed serious violations, including killing civilians during night operations. Increasing air and night strikes by Afghan and foreign forces is part of Donald Trump’s strategy for Afghanistan, but without the increase in civilian casualties and escalation of war, it has had no further effect. A review of Human Rights Watch’s report, its response to its recent report, and what will be the consequences for the government and the international community’s silence on the killing of civilians? These are some of the topics discussed in this analysis.

Paramilitary groups and their activities

Since 2001, the Central Intelligence Agency (CIA) in Afghanistan has been recruiting, equipping, pursuing al-Qaeda and Taliban militants and, after 2014, Islamic State (IS) militants. Has been trained and dispatched, Although the forces are apparently named after the Afghan National Security Service, they operate outside the usual framework of the Afghan National Security Forces Command and under the command of operations under the auspices of the Central Intelligence Agency (CIA). These forces rely on US military logistics and air support. US helicopters transport these forces during operations and even outside of joint operations. The so-called 01-piece forces operate in the central areas of Kabul, Parwan, Wardak, Logar and neighboring provinces. “02” operates in eastern areas of Nangarhar, Laghman, and neighboring provinces, also known as “Kandahar Offensive” 03, the oldest of these forces after the 2001 hunt for al-Qaeda in Kandahar. , Helmand, Zabul, Farah and Uruzgan. Unit 04 also operates in Nuristan, Kunar and neighboring provinces and operates the ‘Khost Security Force’ created before the eleventh September by the US Central Intelligence Agency (CIA). Night operations by these forces aimed at killing or arresting insurgents generally take place in Taliban-controlled rural areas or in war zones. These forces break down the walls and living quarters, search homes and interrogate residents. Some men are arrested without their families knowing where they are kept, while others are killed without question or answer. Many human rights watchdogs have been attacked in civilian operations overnight for misidentification, invalid information and local political rivalries. A local man in Wardak province told Human Rights Watch that they “blew up at home” during a night raid, killing one of my children and taking my other child with them, accusing us of ‘feeding the Taliban’ ? ‘But the Taliban came and demanded food, if we did not persecute them. “

The report is based on interviews with 39 local residents and other witnesses to night raids in Ghazni, Helmand, Kabul, Kandahar, Nangarhar, Paktia, Uruzgan, Wardak, and Zabul provinces, as well as with Afghan human rights groups that have documented these raids. In full, it is titled: “They’ve shot many like this: Abusive night raids by CIA-backed Afghan strike forces”.  The report documents 14 individual cases between late 2017 and mid-2019 in which CIA-backed Afghan strike forces allegedly committed abuses. Forces conducted night raids, in which they dragged people out of their homes without prior warning. Among the allegations are claims they targeted medical staff that treated militants in contested or Taliban-controlled areas, and summarily executed or “forcibly disappeared” people in custody. Moreover, the troops “seem to have unlawfully targeted civilians because of mistaken identity, poor intelligence, or political rivalries in the locality”. Civilian casualties from these raids have dramatically increased in the past two years, the report says.”They are illustrative of a larger pattern of serious laws-of-war violations – some amounting to war crimes – that extends to all provinces in Afghanistan where these paramilitary forces operate with impunity,” it adds. According to the report, the CIA has run counter-terrorism operations separate from the US military since 2001. It continues to recruit, arm, train and deploy paramilitary groups to tackle militants across the country, which one diplomat in the report referred to as “death squads”. Since 2017, the US authorised these groups to call in air strikes even without US forces present, which HRW says has led to more strikes on residential buildings. HRW has called on the Afghan government to immediately disband all pro-government armed groups and strike forces, fully investigate the allegations, end attacks on medical facilities and provide compensation to civilian victims. According to witnesses, the victims of the attack had no opportunity to defend or resist. The militant is said to have killed a tribe’s grandmother with a bullet to his eye and a twenty-year-old granddaughter with a bullet to his mouth. According to the report, specific units of the Afghan National Security Administration, 01, 02, 03 and 04, Khost Guard and Kandahar Security Forces are apparently operating under the Afghan National Security Directorate, but to a large extent, according to Human Rights Watch. They are recruited, trained, equipped and managed by the CIA.

In a statement, the CIA rejected the HRW report, suggesting many of the allegations were “likely false or exaggerated”. “We neither condone nor would knowingly participate in illegal activities, and we continually work with our foreign partners to promote adherence to the law,” the CIA said. Separately, Afghanistan’s Office of the National Security Council said the HRW report “reflected some realities”, but stressed there was “some information that requires clarification”. “We are undertaking further reform initiatives to enable us to deal with these issues,” the office said. Former Afghan President Hamid Karzai, Gulbuddin Hekmatyar, the leader of the Islamic Party, some members of the National Assembly and the general public have come out with the report, calling it a human crime. And demand prosecution of those who have committed war crimes.

The homes of civilians have been targeted and their innocent women and children been killed in the 18-year War on Terror “mistakenly” and/or “unintentionally” and the perpetrators have always been forgotten without being punished or trialed. In a report released Thursday, the human rights defender called on the Afghan government to immediately dismantle pro-government militia units operating beyond the “ordinary military hierarchy.” Independent investigations into existing allegations, prosecution of perpetrators, investigations into serious allegations of human rights violations and war laws, and prosecution of those who have committed war crimes are other demands of the Afghan government’s human rights watchdog.     Continuation and repetition of such strikes will increase distance between people and the government on the one hand; and on the other hand, the action will enflame the harsh reaction and hate of people against the perpetrators of these incidents and will instigate continuation of war in the country. As the killing of women and children and, overall, targeting the innocent civilians is an action against human and Islamic principles; therefore, the Afghan government and international community are obligated to take immediate measures against preventing such blind strikes of Afghan and foreign forces. The Afghan government should follow the recent relentless incidents instead of remaining silent or denying the facts. Besides that, it should also be deeply evaluated how such unyielding attacks could be prevented. Otherwise, treating the latest incidents without seriousness will be counterproductive and help in empowering the ranks of the armed opposition. In brief, the Afghan government is requested to focus on honest peace talks and on how to put an end to the ongoing bloody war, as well as how to prevent countless civilian casualties that occur daily.