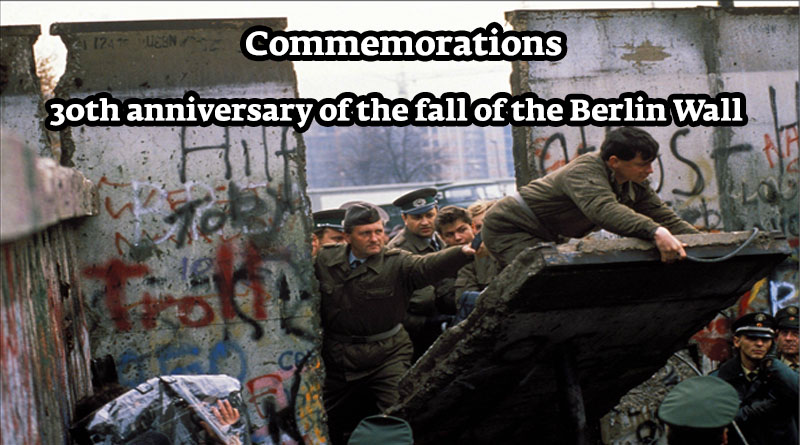 On Saturday, November 9, 2019, when the people of Afghanistan and the Great Islamic Ummah were celebrating the birthday of the blessed Savior of humanity Muhammad Mustafa Sallallaahu alaihi wa sallam. There, in the city of Berlin, once the capital of the Nazi Germany’s fourth Reich, the European nation celebrated the 30th anniversary of the fall of the Berlin Wall. The ceremony was simply opened and lasted for four days by putting flowers on the remnants of the Berlin Wall by Angela Merkel, German Chancellor and a number of other European officials. Born on the other side of the eastern wall of East Berlin, Mrs. Merkel said at the opening ceremony that the Berlin Wall was a major event in European history. No wall that keeps people apart and restricts their freedom … it’s not high enough to bring it down. “Ms. Merkel also said, “The values on which Europe is founded – freedom, democracy, equality and the rule of law – are not self-evident and each must be revived and defended at all times.” Mrs Merkel said she was concerned about European democracy, “There is no excuse for us and we are obliged to do our part for freedom and democracy.” Germany, like some other European countries, is facing a surge in the power of far-right parties. While not well aligned with democracy, these parties have an extremely hostile attitude toward racism and anti-foreign sentiment. Speaking at the ceremony, German President Frank-Walter Steinmeier said in his address that he respected neighboring countries: “Without the courage and free will of the Poles, the Hungarians, the Czechs and the Slavs, the peaceful revolutions of Eastern Europe and the German Unity were possible. ” However, neither he nor the other speakers mentioned the victims of the Afghan people in connection with the fall of the Berlin Wall. While the Afghan people have shaken the 70-year-old sovereignty of the USSR with the demolition of 1.5 million martyrs, and at the cost of devastating 90% of their soil and economy, it provides the way for the release of imprisoned nations, including the East German and other European countries. However, the German Embassy in Kabul wrote on its website: “This November, we are celebrating the 30th anniversary of the fall of the Berlin Wall, and Afghan victims have played a role in this process …” But nothing has been said about the greatness of these sacrifices and the enormous price tag that our people continue to have on the lives of dozens of dear youth.

How was the Berlin Wall Built?

After the end of World War II and in 1947, the four major victorious states of the Second World War, including the Soviet Union, the United States, Britain, and France, divided the failed German state into four separate divisions. Initially, the city was run by a commission consisting of four states, with one of the four states chairing the commission on a monthly basis. It was later decided that the eastern part of the city would remain under Soviet control and that the western part would be jointly ruled by the three US, British and French governments. In 1948, the United States, Britain, and France consolidated their territories and formed the Federal Republic of Germany, which became known as West Germany, which was also ruled by the western districts of Berlin. In October 1949 the Soviet Union established a Communist government under its rule, which led to the formation of the German Democratic Republic, including the eastern districts of Berlin. With the onset of the Cold War, tensions between the Soviet Union and the Western governments escalated and eventually the border between East Germany and West Germany was closed. In March 1961, East German troops surrounded the streets leading to the West Berlin border in a surprise move and workers were building walls along the border. By creating this wall, the communication between the eastern and western parts of the city was completely cut off, and many families living in different parts of the city were separated by 1989 for 28 years. The Berlin Wall, a major symbol of the Cold War, measuring 155 kilometers long and 3.5 meters high, passing only 45 kilometers inside the city of Berlin and known as the Iron Curtain, for three decades made a nation very inhumane. He had separated. During the years that the Berlin Wall was erected, 125 people were killed and about 200 were seriously injured. Among those killed were 32 who had no intention of fleeing, and 80 percent of those killed were under the age of 30, including eight women. Between 1961 and 1989, about 5,000 people fled to West Berlin. Most escapes go back to the time when the only barrier between the two parts of the city was barbed wire. Some also went to the fences across the windows of the apartments near the border. After the wall was built, the escape was carried out through subway tunnels, sewer systems and tunnel excavations.

Relations between Afghan jihad and fall of Berlin Wall

Soviet Socialist Red Army invades Afghanistan on December 27, 1989. President Hafizullah Amin killed with his family in the Taj Bek hill, replacing Babac Karmel, leader of the People’s Democratic Party’s flag-wielding power. They had close relations with the Soviet Union, The attack has prompted strong reactions from the Afghan people to jihad for freedom of the home and defense of the sacred under the jihadist arrangements, most of which were based in Pakistan. In addition, thousands of young people in Islamic countries have flocked to the Afghan mujahideen in a barricade against the Red Cross for sharing their views with the Afghan people on the intention of jihad against the Soviet occupation. In addition, numerous Islamic and Western institutions offer Afghan refugees health, education and charity services, In the midst of US-led Western nations and many Islamic states, including Saudi Arabia, Iran and Pakistan, they have also supported with financial, weapons and humanitarian aid. On the political front, there was also a global consensus (with the exception of limited countries) that condemned the Soviet invasion and its atrocities in Afghanistan and supported the Mujahideen of Afghanistan as a brute force and genuine representative of the Afghan people.

Defeating of Soviet Union; beginning of the collapse

Full support of the international community on the one hand, and the unity and solidarity of the Afghan people and their cruel victims on the other; the ability to resist the superpower of the time; the Soviet Union;’ After Mikhail Gorbachev in … took over the affairs of the Soviet Union, he called for an end to the war in Afghanistan. He calls for an end to the Afghan war by increasing Soviet forces and intensifying attacks on the Mujahideen. But he soon realized that it was not possible to win over the Afghans through war. It was the same way that the negotiated with the signing of the Geneva peace treaty in April 1988 began with the gradual withdrawal of Soviet troops from Afghanistan, which was completed within a year. When the last Soviet soldier left Afghanistan on February 15, 1989, the rest of the world was convinced that the Soviet Union had failed in Afghanistan. This defeat later inspired all the uprisings and dissever in Central Asia and Eastern Europe. Although the Soviet puppet regime in Kabul was still alive and the Afghan mujahideen had not yet achieved a complete victory, the Soviet Union’s withdrawal from Afghanistan in the iron claws of the Soviets was no longer the case yesterday. It was the same as the captive and prisoner nations who had been in the slavery and despotism of the Red Colonies for years; The East German people, at the end of 1989, had more massive demonstrations against the last Communist ruler, Erich Honecker, when they were experiencing slavery, poverty, and tyranny more than any other nation. As the protests spread, the dictatorial regime was forced to withdraw in front of the people, unwillingly promising to secure the freedoms of the people and the fall of the Berlin Wall. Eventually, on November 9, protesters began to break through the wall, creating a surprise that caused thousands to flee East Berlin to West Berlin. The violent disruption of the Berlin Wall severely disrupted the spirit of the ruling system in eastern Germany and prevented them from resisting popular uprisings. One month after the fall of the Berlin Wall, East Germany collapsed, and then the Eastern Bloc governments collapsed one by one until the 1991 Cold War officially ended.

If the Afghans had no direct role in the fall of the Berlin Wall, they would undoubtedly have had a major indirect role in the collapse of the Wall and the liberation of the European and Asian captive nations. It was because of the brave resistance of the Afghan people and their ruthless victims against a decade of Soviet occupation that ended the Soviet Union’s role as an end-point superpower breaking the spell of communist block. In the decade from 1978 to 1989, Afghans made many sacrifices to save the world from devilish communism, including 1.5 million martyrs, 1.5 million disabled, orphans and widows, the destruction of more than 60 percent of the country’s economy, algebraic migration, and more than five. Millions of people are a small proportion of these victims, while the list of spiritual destruction provided by Afghans is very long, but alas, all of these victims responded painlessly to others. We left all our material and spiritual beings in jihad against the Soviet Union to save the world from the evil of war and a warlike superpower. But alas, others have joined hands to help continue the war in our country.