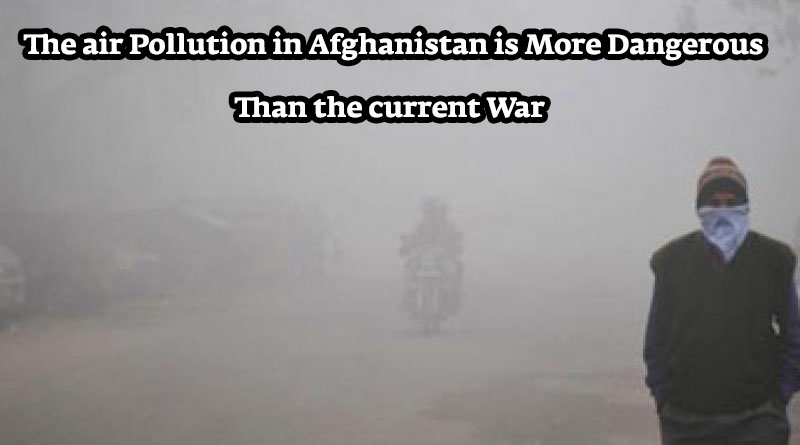 According to a report from the the research group State of Global Air, released on the 22nd of October, the number of air pollution victims in Afghanistan is higher than the victims of war. , but the research group State of Global Air said more than 26,000 deaths could be attributed to it in 2017. In contrast, 3,483 civilians were killed that year in the Afghan war, according to the United Nations. The root cause is the burning of anything possible to get Afghans the energy and heat they need in harsh winters—including plastic, coal, and rubber. Mixed into that is the use of leaded fuels banned in the West decades ago, as well as waste energy plants and heavy industry, Meanwhile, Afghanistan’s National Environmental Protection Agency is also concerned about air pollution. Officials of the agency say Kabul has launched plans to control air pollution, but due to three decades of war, urban infrastructure, water supply, electricity, transport and transportation and green areas have been destroyed. And Kabul is estimated to be one of the world’s most populous cities, with a population of about six million. In this week’s analysis, we analyzed the state of air pollution in the world, the situation of air pollution in Afghanistan, and especially in Kabul, and the prevention measures.

Air pollution kills an estimated 7.2 million people worldwide every year. WHO 2019 data shows that 9 out of 10 people breathe air containing high levels of pollutants. WHO is working with countries to monitor air pollution and improve air quality? From smog hanging over cities to smoke inside the home, air pollution poses a major threat to health and climate. The combined effects of ambient (outdoor) and household air pollution cause about seven million premature deaths every year, largely as a result of increased mortality from stroke, heart disease, chronic obstructive pulmonary disease, lung cancer and acute respiratory infections. The death toll in Afghanistan reached 26,000 thousand people in 2017, according to the World Meteorological Research Group’s report. The findings of the report also suggest that air pollution levels have remained high over the past six years and only in some parts of the United States and Europe. One of the biggest causes of air pollution is the use of coal-fired electric batteries, diesel and gasoline transport equipment, and home appliances to make Sonics. The study says the world’s most sophisticated three billion people do not have access to clean technology, but say there has been some progress in this regard. The highlight of some of the projects in India is that fuel is provided to the poor, in many parts of the world, pollution levels are alarmingly high and are a serious threat to the environment globally, says Dr Maria Naira, head of public health at the World Health Organization. Ms Naira is hitting the big cities, saying her pollution levels are five times higher than what she calls health-safe. She points to Asia and Africa and says 90 percent of all air pollution deaths occur in these two major droughts, Therefore, air pollution is one of the major global challenges against the lives of organisms that exterminates millions of them annually; and if necessary attention is not paid to the improve of air quality, the transportation system, increase in fuel quality and use of electronic vehicles worldwide, the enemy will take the lives of millions of other human beings.

The International Meteorological Organization announced Kabul City as the first city in the world due to polluted in 2018, but New Delhi, Lahore and Karachi were ranked ahead of Kabul in this year’s ranking and Kabul ranked fourth in the world. The city has been called, according to a WHH report, which says 80 percent of Kabul City residents are still breathing air, which is poor quality. According to the report, pollution in the city of Kabul has increased the risk of developing lung cancer, laryngitis and some other diseases, causing thousands of people to lose their lives prematurely every year. Afghanistan is a country with high mountains and rivers full of water as well as a beautiful and diverse nature; however, war and insecurity in the country have deprived the lovely people of Afghanistan from the stunning and unpolluted nature in most parts of the country and, thus, they have swarmed on cities, especially Kabul, the capital city of Afghanistan. According to the report by the foundation, Kabul’s average air pollution rate has increased by eight percent in the last five years, making the situation even more worrisome. The National Environmental Protection Agency says the concentration of suspended particles in Kabul’s air, when up to 500 micrograms per cubic meter, is said to be threatening, above 150 micrograms. The agency added that more than 50 percent of Kabul’s roads have not been irrigated and that the problem is one of the main causes of pollution in Kabul city. Also due to the increase in population, the use of coal, plastic and wood for cooking and heating of houses, most of the time there is a lack of electricity, due to which generators are used, the absence of green areas and the increase of vehicles. Due to the increase in the amount of carbon monoxide, sulfur dioxide, nitrogen dioxide, serum and ozone in the side of the suspended particles, the air is polluted.

Density of Population: Kabul is the most populated city of Afghanistan where around six million people are living. The large population, itself, is one of the main reasons behind air pollution in Kabul because it results to high number of vehicles and increased consumption of fuel.

Low-Quality Fuel: consuming coal, petroleum products, wood and others in factories and for heating homes, especially in winter is an important factor behind air pollution in Kabul city. Poverty has caused shortage of standardized material and consumption of cheap and low-quality goods for cooking and heating which result in air pollution.

Unpaved Roads: Unpaved roads and streets of Kabul are another main reason behind air pollution in the city. After 2001, billions of dollars of foreign aid was donated to Afghanistan but was spoiled because of high rate of corruption and low capacity in the government institutions and by passage of 18 years, the roads and streets of the city are still not asphalted which causes air pollution.

Drought: Lack of rain in the recent years in Afghanistan, especially in Kabul City, has also contributed in an increase in air pollution. Lack of rainfall has caused in degradation of vegetation cover and and increase in dust in the city.

Poor Governance of Responsible Government Institutions: Lack of adequate mechanism for standardization of Kabul City and absence of effective and practical strategies for fighting against pollution has caused excess in air pollution and the responsible government institution not to respond to it.

The fact that Afghanistan has fallen behind in the ranking of the International Meteorological Organization this year cannot be termed as a government effort, but the cities where it is now ranked ahead of Kabul in this ranking are the cause of its severe weather deterioration. The National Environmental Protection Agency of Afghanistan announced this year on the 14th of October, a five-year plan in collaboration with 13 sectors to prevent air pollution in Kabul, which will be implemented. Most of them are to prevent air pollution.Environmental protection requires the cooperation of various agencies within a country, First of all, the National Environmental Protection Agency should play its role in the implementation of this plan and take serious steps to enforce the Environmental Law, and in the event of a violation, the judicial bodies will perform their duties. The general public is required to abstain from work that causes harm to the environment. Examples include poor quality toilets in new buildings, burning of plastics, tires and other toilets in public places, burning wood or coal as shelves in homes, hotels and bathrooms, and using old machine cars; all that can be done to reduce the number of problems can be greatly reduced.