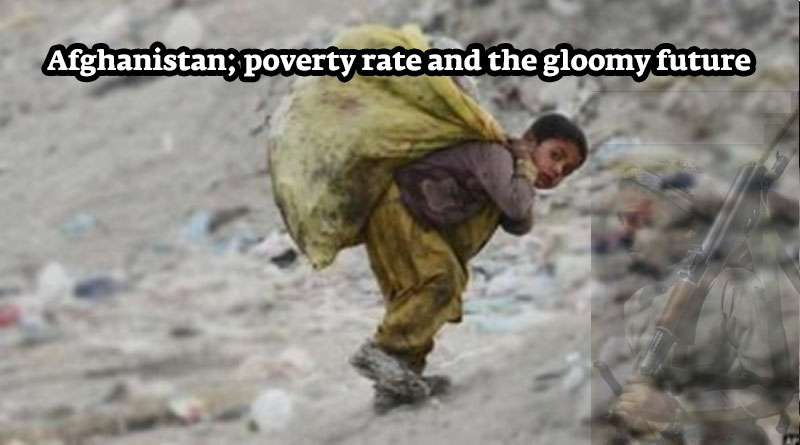 The International Food Security Assessment Has wrote a recent report that the general public in Afghanistan is facing severe food security threats. This week’s analysis; investigates a number of solutions, including current and future threats to poverty levels in Afghanistan, and in particular food security, and the upcoming programs of the Afghan government and international donors.

Afghanistan’s economy has suffered major setbacks after decades of continuous wars in Afghanistan, Poverty is a global phenomenon, and millions of people all over the world suffer from it. Most of the world’s poor population lives in the African and South Asian countries. Afghanistan also suffers from poverty and is one of the countries where the income rate of their people is lower and, therefore, the poverty rate is higher in Afghanistan.

There is no exact statistics at hand about poverty in Afghanistan, but after the Soviet invasion, the poverty rate in the country has begun to rise. At that time many Afghans took refuge in neighboring countries and lost their business and assets.

But on the other hand, when the Islamic Emirate of Taliban came from all over the country and instead of the US, a number of US-led international community forces and agencies came to Afghanistan, and the most common Afghans were seen in various fields with foreign institutions. Things got busier, and so did the unemployment rate, After 2000, According to the Ministry of Economy, 55 percent of Afghans live below the poverty line,  with the presence of international force in Afghanistan, millions of dollar was injected in the country, and as a result some sectors in the country began to develop. But according to the statistics of the World Bank, compared to the world poverty rate, the poverty rate in Afghanistan is remained stable and has not declined.

In the joint report of the World Bank and the Afghan government, decreased international aids to the country, unemployment crisis, internal crisis and the expansion of the war in the country are listed to be the factor behind the poverty in Afghanistan. It is at a time that after 2014, the war in various regions in the country is intensified; the number of internally displaced people is unprecedentedly increased, hundred thousands of Afghan refugees have returned from other countries especially from Pakistan and Iran and, due to high rates of unemployment, tens of thousands of Afghan youth are forced to leave their country. Therefore, it seems that since 2014, poverty has increased in the country.

According to the latest Integrated Food Security Phase Classification (IPC) report conducted between August and October 2019, food security accounts for 30 percent of Afghanistan’s entire population. Highly threatened and in need of humanitarian assistance, rising unemployment levels, rising public goods prices, wars, floods and droughts have been identified as the main obstacles to food security for the general public. Public Safety If the definition of food security is seen by the 1996 World Food Summit, “access to public access to safe, physically, socially and economically sound and safe foods at all times is called food security” By this definition, truth also poses severe food threats. This organization, which has been operating in Afghanistan since 2011, reported this year’s report to be somewhat more comprehensive than previous years and the countrywide, which includes rural and urban areas. According to the report, there have been some good developments in food security this year, but along with a number of other problems, population growth and war are still being cited as factors that may contribute to future food shortages. In the face of security, ordinary Afghans face other serious challenges and threats. According to a recent report by the agency, six out of every ten families mentioned the challenges and problems in terms of food security. Residents of Wardak, Nuristan, Bamyan, Farah, Helmand, Faryab and Ghur provinces have again faced some of the most pressing problems and challenges in food security in the country – more than 80 percent of the population was affected by food security in these provinces. In overall 29 percent of the general population lost their workload and daily income dropped to 25 percent, with the two problems affecting most of the people in these provinces economically. Nearly half (47 percent) of households that helped report makers share information said their household income dropped significantly compared to the previous year, and those households reported lower household incomes by 60 percent. Unemployment and 25 percent of the war played a role. In Afghanistan, 11.8 percent of the population is paid for formal employment, 2 percent of the money that family members send to their families after working in foreign countries, and the remaining seventy percent of the people in agriculture and livestock. The section meets the daily needs of the busy.

Poverty rates and the future

IPC estimates that 11.29 million people, who make up 37 percent of the country’s population from November to March 2020, may face severe food security challenges. Although the country is experiencing a recession from the drought of 2018, the security problems in the country are what are causing the general public to migrate from their areas to other areas. About 355,000 people have been displaced this year due to security problems alone, thus, people in areas where IDPs have migrated have been exposed to even greater unemployment levels and, consequently, avoid food security problems. According to the Famine Early Warning Systems Network, rainfall levels may average on average in the country from November to March 2020, which can result in different levels of rainfall across the country. Have effects on. For example, in areas where there may be good Afghans gaining access to agriculture and there is a large amount of agricultural land available, residents of those areas may and may not leave their areas for fear of war. There are agricultural activities that will not only affect the agricultural sector of the country, but also contribute to the unemployment of the people in those areas. Due to lack of public access to food market and snowfall in winter season and highway closure, residents of many areas of Ghur and Badakhshan provinces are facing not only food shortages. Rather, the temperature rise and fall after the end of the winter season is said to result in flooding of the agricultural lands of the country which could be effective in providing food for the general public. On the other hand, Kazakhstan, which plays a major role in the wheat market of Afghanistan, regions of the country where wheat is grown may also be able to reduce wheat production due to reduced rainfall, which can eventually lead to Afghanistan being remembered. Increase the cost of wheat imports, and it can also contribute to increasing the poverty level of ordinary Afghans, which the Afghan government must take the necessary steps on, which has yet to be seen.

The Afghan government, which has now shifted its focus to the recent meetings and talks between the US and the Taliban on the war with the opposition, the results of the elections and Afghan peace, has increased unemployment levels at the country level and The challenges that common Afghans face in the future can be far more dramatic, with no particular attention being paid to the future. Afghan authorities are required to pay special attention to the unemployment rate reduction and to assist international donors who have already assisted Afghanistan in various fields of humanitarian assistance, especially in agriculture. Attract effective and effective support, and on the other hand, some countries, especially Saudi Arabia, the United Arab Emirates, Qatar, can make a number of agreements to make formal proposals and recruit Afghan manpower with them, in the short term, from one side to the other. Unemployment levels graphically and effectively reduce, and on the other hand, save the lives of many Afghan youth who want to go through smuggling routes to foreign countries. And in the long run, the government and the concerned agencies should give serious attention to the agriculture sector, because the country has a rich land on the one hand and a great water blessing on the other, to strengthen the agriculture sector. After the bilateral peace, export of wheat and other agricultural commodities such as rice from foreign countries to the country can be exported, which can lead to the country’s economic development?