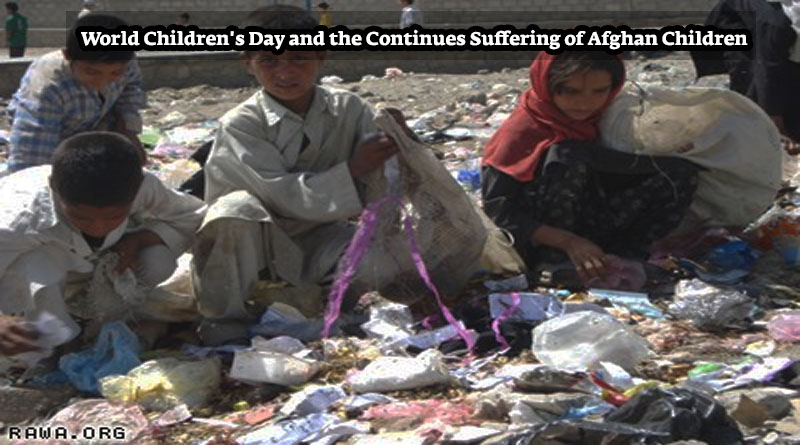 November 20 is World Children’s Day, on that day, the UN General Assembly ratified the UN Convention on the Rights of the Child 60 years ago and the Convention on the Rights of the Child, 30 years after Afghanistan signed this human rights document in 1994. Afghan children lack adequate physical, mental health despite efforts by human rights organizations, Psychologists now believe that Afghan children are in extreme vulnerability and that sexual harassment, class differences, poor living conditions and wars are damaging to the psyche of these children. Meanwhile, the United Nations Children’s Fund (UNICEF) has announced that four million children in Afghanistan are in need of assistance and 800,000 of them are in need of urgent help. According to UNICEF, these children are facing serious problems because of the continuing war, insecurity, economic problems and drought in Afghanistan. The ongoing war, the dire political and economic situation in Afghanistan has made the situation of the children of this country sad. Child sacrifices in the war, deprivation of education, social threats and all kinds of violence against them have made life difficult for Afghan children. This analysis deals with the same unfortunate situation of Afghan children.

Report child support United Nations shows that Afghanistan still ranks 18 countries in the world is worse for children’s development; UNICEF in Afghanistan has said that Afghanistan is at the top of the list in terms of child deprivation in terms of child deprivation. The United Nations Office for the Protection of Children in Afghanistan said in a new report that the situation has deteriorated for the country’s children after significant progress over the past 18 years. According to the report, although efforts have been made to improve the situation of children over the past 18 years, these efforts have failed to improve the situation of children in Afghanistan. The report shows that more than seven percent of children die before the age of five, 40 percent suffer from rapid growth, more than 4 million children drop out of school, and nearly a third work, “Now more than ever, the world needs to invest in Afghanistan so that children can no longer be an anonymous generation,” UNICEF officials said in the report. “Childhood should be a safe and happy period, but that is not the case for millions of Afghan children. Most of them have to sacrifice their childhoods for the sake of violence, poverty and unfortunate consequences.” UNICEF in Afghanistan urges international community to provide more humanitarian aid to address child welfare situation, The United Nations has requested about $ 500 million in humanitarian aid to Afghanistan in 2019, with only about 40% of it funded so far, the report said. Children in the country have lost the right to education, protection and health during the period of national unity, the report says, a report by the United Nations Office for the Protection of Children in Afghanistan cited armed conflict as another major challenge and said key parts of the country were increasingly at war.

Vulnerability of children in Afghanistan has many political, securities, economic, and social factors, the most important of which are:

Violence and exploitation: Violence is one of the issues that threaten most children in the country. This is common not only in the family but also in the community. Children are not only exposed to direct physical violence, but also suffer from a variety of psychological violence. Child rights, poverty and illiteracy are believed to be major causes of violence against children. Poverty and illiteracy in today’s Afghan society have caused many children to experience domestic violence.

Security Threats: Children in Afghanistan face various risks. Addiction, abduction, and war and natural disasters threaten children. UNICEF officials in Afghanistan (UNAMA) say that during 2019, 2461 children were killed or injured as a result of the ongoing genocide in the country. Ms Shoessen, head of the Mine Action Committee in Afghanistan, says that about 20 children are killed or injured by landmines every month in Afghanistan. The presence of children in the ranks of the warring parties in Afghanistan, their use for war purposes and even the sexual exploitation of children is another concern for the lives of Afghan children. Although human rights bodies have repeatedly expressed concern in this regard and in their reports that young people in Afghanistan are being used in the ranks of the war, they are being recruited both in the ranks of the armed opposition and in the local police. As a whole, despite the introduction of the new system in 2001, various national and international organizations have been active in the field of human rights and child protection in Afghanistan and have spent millions of dollars in this area, but Afghan children still somehow They are all victims of war and insecurity.

Social threats: Such as moral problems, running away from home, drug addiction and so on

Financial problems: The high number of children and the poverty of families have made parents unable to provide adequate support for their children, providing for their educational needs and meeting their daily needs. This has deprived many children of the benefits of education and, after the age of five and six, started working in the field.

According to this analysis, the following should be considered to improve the condition of children;