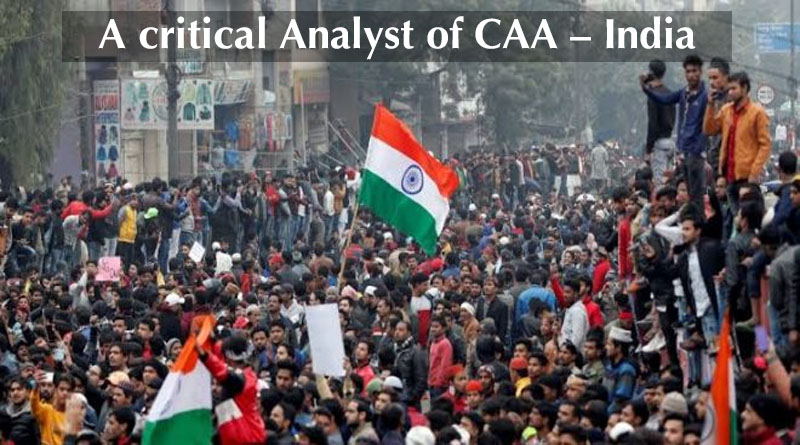 Citizenship Regulation Act 2019 – CAA passed by Prime Minister Narendra Modi’s Hindu nationalist government by chanting the preamble to the Constitution of India, The C.A.A. offers an accelerated pathway to citizenship for Hindu, Sikh, Zoroastrian, Buddhist and Christian migrants from Pakistan, Bangladesh and Afghanistan but excludes Muslims, Faced with strong opposition from Indian Muslims and non-Muslims, human rights advocates and activists outside and inside India and the United Nations, Demonstrations in opposition to the law are still going strong, Which has Prevent the Indian government to Great gatherings and block access to the Internet in some places. The Indian Government’s answer is that the new regulation to the law does not focus on depriving Muslims of citizenship or discriminating against Muslims. Rather, its focus is on supporting non-Muslim religious minorities who have been oppressed in their countries and sought refuge in India, and that is India’s duty to help them.

Short-term effects of the law

New Regulation to Citizenship Law and Overall Process of Detecting Illegal Immigrants Will Create Many Problems for Muslims in India, One of the problems is the lack of clarity in the population registration process and the subsequent process of identifying illegal immigrants. Detection of suspected citizenship and illegal immigrants has not been properly explained, and it is unclear what kind of information and documents are required to declare individuals as suspected citizens or illegal immigrants. Detection of these cases necessitated the view of the agents in the process, which would result in discriminatory practices against Muslims, and Muslims who were even legal citizens declared illegal immigrants. Or even responsible officials to demand bribes from legal but also Muslim citizens to notify illegal immigrants if they are denied or unable to pay, If an immigrant is declared illegal it is the person’s responsibility to prove his / her citizenship. The process of proving citizenship for Muslims who live in villages and are poor and illiterate is very difficult, inevitable and even impossible, In addition, a religiously biased treatment of Muslims will damage the image of India in the region and the world. India, renowned for being the world’s largest democracy, has been home to hundreds of minorities and religions for hundreds of years. Now that the Narendra Modi government and the ruling party want to change the democratic image of India, marginalize Muslims or make it to refugee camps, and make India the land of Hindus only, This will have far-reaching consequences for India’s security and economic development and will present a terrifying image of India at the regional and global level, especially among Muslim nations.

Long-term effects of the new law on the Muslims community

The 2019 regulation to the Indian Citizenship Act is not much different from the 1982 Myanmar Citizenship Act. Under the 1982 Myanmar Citizenship Act, only those who could obtain citizenship were considered to be Myanmar indigenous races. Thus, the Rohingya, who are Muslim, were denied citizenship of Myanmar, which eventually led to humanitarian disaster, forced deportation and genocide in recent years. Discriminatory treatment and marginalization of Muslims will cause severe religious divisions between Muslims and other religions residing in India, especially Hindus. India’s nationalists will dare to attack Muslims, ransack their property, forcibly evict them from their homes and lands, and even kill them, something that happened in Myanmar. Amid the sharp divide between religions in India, a new regulation to the law will cause development stagnation and severe economic damage. In countries where different religions live and millions of adherents do not reach the millions, one cannot abstain from paying the rights of any of their adherents or marginalize or discriminate against them. This will jeopardize the security of the country, facilitate the intervention of other countries, and eliminate the peaceful environment and political establishment necessary for economic development. In addition, when in the state of Assam alone about six percent (nearly two million people) of that state were declared as a result of the process of identifying illegal immigrant citizens, If this percentage is extended to the whole of India, approximately 79 million Muslims will be declared illegal immigrants, These numbers are neither economically viable in camps nor politically viable in other countries. The result of declaring Muslims as illegal immigrants to India is the result of intense religious divisions, security problems and ultimately a negative impact on India’s economic development.

What should be done by BJP Government?

Illegal immigrants are a major problem in most countries in the world. The US, Europe, Canada and other countries are suffering from this problem. Some of these countries do not allow the granting of citizenship to illegal immigrants, Denial of Citizenship to Illegal Immigrants According to the conditions of countries can be logical, but grant or grant citizenship on the basis of religion among countries is not only uncommon, but also in violation of the most basic human rights. India also declared in 2003 that it was impossible to grant citizenship to illegal immigrants, which could be logical. But the difference between the 2003 adjustment and the 2019 regulation to the Citizenship Act is that the first adjustment was applied regardless of religion, but the 2019 adjustment declared religion the criterion of grant or not grant citizenship. Grant citizenship on the basis of religion is a discriminatory approach that is not common in any country in the world, the only way to amend this law is for the Indian government to immediately remove the requirement of religion from the new adjustment. If the argument is that non-Muslim minorities are tortured in Muslim countries such as Bangladesh, Pakistan and Afghanistan because of their religion and India has a moral duty to protect them and to provide a safe environment for them, and then this applies to Muslims That in China, Sri Lanka and Myanmar are persecuted because of their religion. Other ways should be sought to identify illegal immigrants and try to minimize their numbers. This should be done in complete transparency, regardless of religion or race; only in this way will India be able to prevent severe security problems, economic damage and becoming a despicable nation in the world and the Muslim nations.