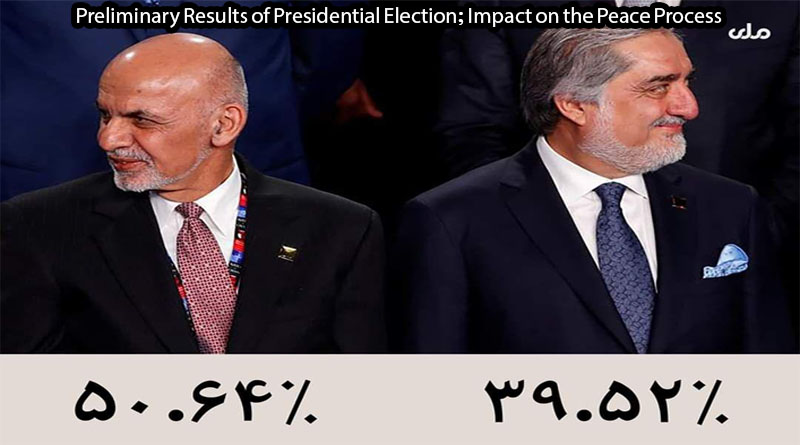 The IEC has at last announced on 22 December the preliminary result of the 28 September presidential election. In these results, which are not final yet, President Ashraf Ghani has received a razor-thin majority of 923,868 votes (50.64 per cent) of the 1,824,401 votes counted by the IEC. If confirmed this would mean a win for Ghani in the first round, making a run-off unnecessary. His closest rival, Chief Executive Dr Abdullah, received close to 40 per cent of the counted votes. All other candidates were well behind the two lead contenders. Hezb-e Islami leader Gulbuddin Hekmatyar was in third place, with 3.85 per cent of the votes. The total number of votes counted – 1.82 million (31 per cent women) – represents less than 20 per cent of the almost 9.7 million registered voters and around 12 per cent of the total population in voting age, which is roughly calculated at 15 million.

Why have the election primary results been delayed?

The IEC had scheduled the announcement of preliminary results for 22 days after the 28 September election, on 19 October, and final results for 19 days after that, on 7 November. It had scheduled the possible runoff for 23 November, is less than two months after polling day. In late October, however, the IEC postponed the announcement of preliminary results to 14 November. This second deadline was also not kept, and more than two months since the 28 September election, it has still to set a new date for preliminary results.

When announcing the first delay on 19 October, the IEC cited “technical reasons” and more so” its intent “to secure transparency” for the procedure. Two days after the second deadline was missed, on 16 November, the IEC cited the following reasons:

The likeliness of the second round

The Independent Election Commission (IEC) announced the preliminary results of the Sept. 28 presidential vote after a three-month-long delay based on which President Ghani has won reelection by a hair’s breadth, netting 50.64 percent of the total over 1.8 million biometric votes. However, questions about the transparency of results as well as the large volume of complaints lodged by various presidential teams bolster a concern that the final results may see a radical change after adjudication of the complaints by the Independent Electoral Complaints Commission (IECC), thereby pushing the election to the second round to be held between the two top contenders. According to electoral laws, the candidates have three days to lodge complaints with IECC about the results.  On the first day, the Stability and Convergence team led by Chief Executive Dr. Abdullah Abdullah, who rejected the outcome as “fraudulent”, has registered over 8000 complaints about the preliminary results. Abdullah’s team, which had also boycotted the vote recount and audit process, is calling for invalidation of at least 300,000 votes that his team describes as either non-biometric or cast outside the official voting time. In the meantime, IEC is also divided over the preliminary results.  Following the announcement of the results, Maulana Abdullah, an election commissioner, has acknowledged in a letter addressed to IECC that the preliminary results were beset by legal and technical issues, calling on the commission to investigate all complaints with utter neutrality and independence, separate genuine and fraudulent votes, and evaluate the results. Even though it took IEC three months to release the preliminary results, there are still questions and concerns about the transparency of the results. The registration of 8000 complaints just by one team indicates that the possibility of a sea change in the final results cannot be ruled out. If IECC invalidates more votes as in previous elections based on complaints or any other considerations, a run-off becomes inevitable. Given the huge number of invalided votes in previous presidential elections, it is highly likely that the electoral complaints commission may nullify President Ghani’s votes as much as his overall votes fall short of the “50% +1 vote” threshold necessary to be declared winner of the election, thereby making the second round unavoidable In these preliminary results, President Ashraf Ghani has crossed the 50 per cent threshold necessary to avoid a run-off, but only by a razor-thin margin of fewer than 12,000 votes. The main other presidential candidates have already rejected the result. The likelihood of such a scenario stands high, as Americans also prefer it since they are not sure if President Ghani, if reelected, will be ready and willing to step down in case the ongoing peace talks between Americans and the Taliban succeed.

The Effect of Elections on Peace process

Undoubtedly, elections, how-to elections, delays of results and then the announcement of preliminary results are linked to the ongoing peace process. Most people expected that there should be peace and re-election first, but President Ghani was trying to get the first election and then he entered peace talks with the status of an elected president. President Ghani’s request was implemented, and the reason was that the US pressured the Taliban that if they did not accept the request, there would be elections in Afghanistan and there was no chance of peace again for five years. In addition, there was no significant improvement in the dialogue between the Taliban and the US during the elections. When the elections were held, there was significant progress in the dialogue between the Taliban and the United States, since the announcement of the election results had a negative effect on the ongoing talks with the Taliban, now that the Taliban and the United States have had more recent. And the Taliban insist on their ceasefire alone, so the US wants to pressure them once again. That is why the preliminary election results have been announced to show the Taliban that if they do not accept our request, the results of the election will be known and Afghanistan will have a re-elected president for five years with the chance of peace with the Taliban decreasing. Now a path to the Taliban has been left open. That is, the Complaints Commission will accept the demands of the US until the work is done. The Taliban are shown that if they do not accept these demands, the appointment of an elected president for the next five years will only require the decision of the Electoral Complaints Commission. If the Taliban accepts these demands, then the ECC’s decision will drop President Ghani from the winning position, the election will go to the second round and the second round will not be held. Then there will be a government based on peace and a new structure in Afghanistan, which will make the election process and results meaningless. Accordingly, electoral changes, disputes, developments and obstacles in Afghanistan are all linked to the peace talks in Qatar. Here, electoral developments are used to pressure the Taliban, and again the results and progress of the talks here affect the fate and outcome of the elections. The commissioners of the Electoral Complaints Commission (ECC) have said that due to the increase in complaints, the process may not be completed within a certain time frame, be done.