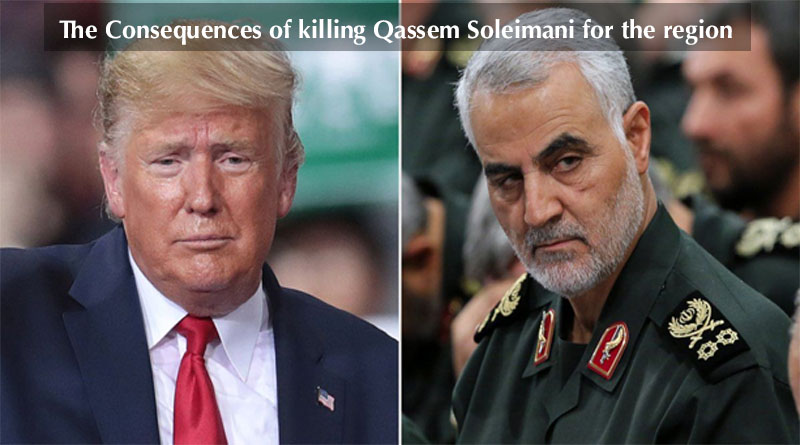 The US president cited the killing of Qassem Suleimani as a major achievement, and while promising to do so for the protection of Americans and the world, the Iraqi Prime Minister issued a statement condemning the killing of Qassem Suleimani and Abu Mahdi al-Mohandes. It was seen as a violation of Iraqi national sovereignty and contrary to the requirements of US troops in Iraq. Officials from other countries, international organizations, groups and pro-Iranian organizations have called Suleimani’s death a major loss for Iran, but other countries have welcomed Suleimani’s death in hopes of alleviating tensions.

Who was Qassem Soleimani?

Soleimani joined the Revolutionary Guard (IRGC) in 1979 following the Iranian Revolution, which saw the Shah fall and Ayatollah Khomeini take power. Reportedly, his training was minimal, but he advanced rapidly. Early in his career as a guardsman, he was stationed in northwestern Iran, and participated in the suppression of a Kurdish separatist uprising in West Azerbaijan Province. On 22 September 1980, when Saddam Hussein launched an invasion of Iran, setting off the Iran–Iraq War (1980–1988), Soleimani joined the battlefield serving as the leader of a military company, eventually, in the 1990s; he took over the leadership of the Quds Force. But Suleimani was not well known until the US-led invasion of Iraq in 2003; The Iranian general had been praised by the Iranian leadership for overseeing Hezbollah’s tactics in the war with Israel in 3006 and was also able to facilitate a ceasefire agreement between the Shiite militia group Mahdi Army and the Iraqi Army in 2008. CIA officials have described him as a key leader of Iran’s ambitions in the region. Suleimani had once told him, “You must know that I, Qassim Suleimani, manage Iran’s policy toward Iraq, Lebanon, Gaza and Afghanistan,” according to former CIA chief Gen. David Petraeus. It has made Quds Force Iran’s most important player in Lebanon, Iraq, Syria and the Palestinian territories, challenging Israel, Yemen and even Bahrain. What is nowadays called Iran’s Middle East policy is mainly the product of the activities of the Quds Force and Qassem Soleimani. He transformed the Quds Force into one of two pillars of Iran’s military capability along with the IRGC missile capability.

The Quds Force is part of Iran’s Revolutionary Guard, according to the Council on Foreign Relations, or CFR. Founded after Iran’s 1979 revolution, the Guard defends the Islamic Republic of Iran. The Quds Force performs “operations external to Iran to advance the Islamic revolution. This force is specifically (but not exclusively) propagandized for training and organizing Shiite militias in various countries, with the aim of countering Sunni militias active in the region, which the Iranian government maintains support for Saudi Arabia and Western countries. The Quds Corps has been training and organizing in various countries for decades, including in Iraq (Hashid Sha’bi), Yemen (Houthis), Syria (Bashar al-Assad’s government), Lebanon (Hezbollah), Gaza and the West Bank (Islamic Jihad Group). ), Soleimani played an important role in consolidating Iran’s interests in the region. He strengthened Iran’s influence in Iraq by providing financial and logistical support to Shiite militias. The Shiite militias eventually united and formed a popular mobilization group. In Syria, Qassem Suleimani’s forces have been helping Assad’s regime resist popular uprisings and recapture Sunni militant groups, including the Islamic State. It is noteworthy that in Syria, Afghan criminals also participated in Quds-based cooperation, according to statistics, killing more than 2,500 Afghans in Syria. Suleimani assassination weakens Iran’s position in the region, especially in Syria, Afghanistan and Iraq

Why Suleimani Was Killed?

Several people in Trump’s close circle like former national security advisors, Michael Flynn and John Bolton, and “unofficial advisors” like Israel’s Benjamin Netanyahu and Saudi Crown Prince Mohammed bin Salman, have all incessantly urged him to act militarily against Iran and push for regime change. But for three years, Trump chose to ignore their advice, insisting that the US does not seek war with the Islamic Republic. Instead, he slapped Tehran with tough sanctions aimed at crippling its economy, containing its regional ambitions and forcing it back to the negotiations table to sign another deal – a “Trump deal”.  So, what changed? Well, basically, the Trump administration realized its “maximum pressure” policy has failed. It may have hurt Iran but it did not isolate or deter a bellicose Iranian leadership. Iran’s proxy attack on the US embassy in Baghdad earlier this week was a rude reminder of the humiliating 1979 takeover of the US embassy in Tehran that demoralised the Carter administration and the 2012 attack on the US diplomatic compound in Benghazi that bruised the Obama administration. The Trump administration, which feared a repeat of this scenario in Baghdad, claims its response was meant to safeguard American lives from future attacks, not start war with Iran. Or, according to the sceptics, it was meant to safeguard the Trump presidency by deflecting attention from the impeachment during an election year. Either way, the assassination is a clear departure from the policy of sanctions, showing Trump’s readiness to use US military might as much as its economic power. Actions speak louder than words.

Iran after the Death of Soleimani

From the outset, the Islamic Republic rejected Trump’s abandonment of the nuclear deal and the imposition of sanctions as unacceptable bullying, and refused to sit by idly while US sanctions blocked the country’s vital oil exports, crippled its economy and bankrupted its military. Tehran expanded its proxy attacks on US assets and allies in the area, including recent attacks on tankers in the Gulf and Saudi oil installations, leading up to this week’s attack on US positions in Iraq. Tehran has also cultivated new strategic alliances with Russia and China, joining the two for war games in the Gulf of Oman in late December. The assassination is not going to change any of these policies; in fact, it will merely accelerate them. If history is any guide, Iran will absorb the attack at first and avoid an all-out war with far superior US military forces. Trump may have challenged Khamenei for a duel, but the supreme leader prefers fighting in the shadows.

So, respond, he will. His options are plentiful and his timetable is open-ended. This includes assassinations, covert operations, low-intensity warfare and oil and maritime disruptions in the Gulf region. In other words, more of the same – much more. This will especially be the case in Iraq, where Iran has long exploited US failure and retrenchment in order to shore up its allies and clients and increase its strategic leverage against the US. And it may well do that again.

Impact of Soleimani’s Death on the Afghan Peace Process

The killing of Qaseem Suleimani, Iran’s second most powerful man by US forces could have a negative impact on the Afghan government’s peace process with the Taliban. Tehran and Washington will confront each other indirectly in Afghanistan that will be harmed by the Afghan people. Iran has already provided military assistance to armed groups in Afghanistan and will increase its aid if tensions between Iran and the United States increase. If the tensions between the United States and Iran continue, Iran will use the Taliban and other groups for its proxy war. “However, a few days ago, US Secretary of State Mike Pompio said Iran was actively recruiting some militant groups in Afghanistan. Protects. Another issue linked to recent US-Iran tensions is the Taliban’s use of the situation as a pyramid of pressure. The United States is trying to get the talks going between the country and the Taliban as soon as possible and with US conditions. But the Taliban are struggling to gain more points in these talks.

Now that Tehran and Washington have openly exchanged fire, the two countries’ conflict will continue in the shadows, where it has been for 40 years, where the Iranian Revolutionary Guards will still seek to avenge Solomon’s blood from the United States. However, Iran now knows after the assassination of Qassem Suleimani that any attack by Tehran and even Iran’s proxy elements could lead to another attack by the United States. What has struck Iran in the short term is the pressure from the unintentional fall of the Ukrainian airliner, which was attacked by the IRGC missile, killing all the passengers and aircraft. One can see how far Iranian diplomacy has succeeded in different areas of Aga, mainly Ukrainians, Canadians, Afghans, and others, with at least some exchange and loss. This incident is very different from that of Qassem Soleimani’s murder and Iran’s response to it. The unintentional crash of the Ukrainian airliner has long-term political, economic and human consequences that, unlike the first one, will pose a great deal against Iran.