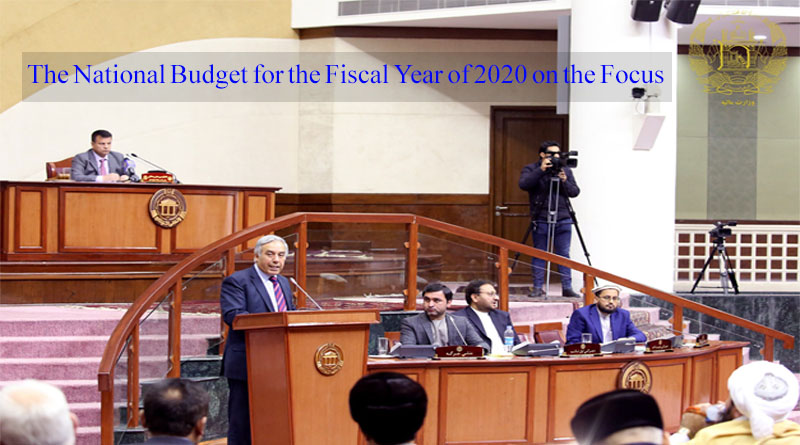 In Afghanistan, a national budget is first drafted by the Ministry of Finance and then presented to the cabinet. After the approval of the cabinet, the budget plan goes to the Senate. After the Senate approval, it is presented to the Wolesi Jirga or Parliament for approval. Parliament, consisting of representatives of the nation-wide nation, examines the budget plan in every way. To see if normal and development budgets are correctly estimated in this year’s budget? How consistent is the budget across provinces? And a number of other budgetary aspects are thoroughly investigated by the House of Representatives during a series of debates. In the past few years, it has been seen that the budget prepared by the government is passed by the Senate and the Wolesi Jirga after a series of debates and criticisms. And most of the criticism that the House of Representatives has on the budget is left only on paper. Budget criticisms and suggestions that the House of Representatives give to the government are obvious reasons for their neglect and lack of implementation. For example, many lawyers do not have sufficient budget information, and cannot effectively address budget issues with the government. Secondly, there are individuals in the Wolesi Jirga who are not elected to the actual vote of the people, but rather reject or pass a budget plan based on their personal and political interests. Until now, it has been seen that representatives of the public who have relevant information on the budget or who want positive change are left to their demands and criticisms. This year’s budget numbers show that this time, national revenue has also increased effectively and its contribution to the national budget is increasing. Yet the Wolesi Jirga’s budget this year recalls the government’s failure to provide details on precautionary codes, especially the money transferred to the code 91, and the government’s delay in sending the budget to the House. The approval of the budget has hampered and delayed it

The Wolesi Jirga is alleged to have illegally transferred 15 billion AFs form 91 codes from the Bank of Afghanistan and significantly changed last year’s development budget. But Finance Ministry spokesman Shamroz Khan Masjidi reiterated: “The budget-related rules have the power and authority to make such decisions, except for the budgetary committees of the finance ministry, in Article 16, to make changes to the precautionary codes. And make adjustments. Chapter 21 of the Principles on Payroll, the Ministry of Finance cannot transfer money from the payroll section to other codes, but security agencies are exempt from this chapter. That is, the Ministry of Finance can send money to security agencies even when needed. The finance ministry denies the allegations leveled by the representatives of the public on this basis. That is, around 3.1 billion AFS of the 91 code was spent and transferred to the National Security Agency’s top code in light of the law. The Wolesi Jirga, on the other hand, claims that the government should share details with them about the amount spent on the code 91. But according to the Finance Ministry spokesman, neither the Wolesi Jirga, the president nor the finance ministry itself can explain the expenditures from the NDS, and the reason for the secrecy of the secret information at the national level. If seen, there really is no credible evidence of the money spent with the House of Representatives on the 91 Code that accuses the government of corruption. Because the government then claims that because it transferred money to 91 Code, Ghazni and Kunduz provinces collapsed and Farah province was in danger of falling again so it was necessary to provide timely help to security agencies. If the Ministry of Finance approves the Wolesi Jirga’s assistance in assisting security agencies in similar security situations, it will take time and the security risks will outweigh the benefits. On the other hand, if seen by the security agencies themselves, the president and the US ambassador confirmed that there was corruption. Although it would be difficult to predict the security threats and incidents of the country, the 91 code would have to be set up under the law to set up an independent commission, in order not to be overstated by security threats. Make proper assessment of money spent. The commission, which the House of Representatives should represent, can also circumvent its deception, which the Ministry of Finance is commenting on, and states that the NDS cannot post 91 code details on secret and confidential information sharing. Share. With the formation of this commission, the criticism and concerns of representatives of the people who have been accused of exploiting a particular election ticket campaign in the last presidential election from the 91st jump will also be addressed.

The National Budget for the Fiscal Year of 2020

National budget for the fiscal year of 2020 is 428 billion Afghanis, out of which 289 billion are the regular budget and 139 billion are dedicated to developmental projects. According to the Ministry of Finance statistics show an increase of eleven percent over the year 2019. Of this, 208.9 billion AFs, which account for 48 percent of the total budget, were received from national revenue. Depending on the economic situation in Afghanistan, it was necessary that the Wolesi Jirga approve the budget on time. On the one hand, the salaries of government workers were paid on time and on the other hand development projects that the government allocated budget for implementation were started on their own time. But the Speaker of the House Mir Rahman Rahmani again called this year’s budget irregular at the provinces, among other problems, and said that the national budget should not be distributed on account of first, second and third tier regions and provinces. Provinces are subject to deprivation based on this distribution, over the past few years, it has been seen that the government has made a number of changes to the development budget following the adoption of the budget. Some of the national projects that have been allocated for the budget have not yet started or are not yet completed. This year, the government has also announced 598 projects, while it has 539 transitional projects, namely last year’s projects and only 59 new projects which will be looked at in the future as to how things are going.

The government should set the development budget for the development of the national budget based on the demands and advice of the people at all levels. Although there have been meetings with a number of people from around ten provinces, including Kabul, Nangarhar, Kandahar, Herat and Mazar-e-Sharif. In the future, the government should place the advice and demands of the people of all provinces across the country in the development budget. Not to move national projects to specific areas, rather than to political goals and electoral campaigns, in the development budget, the government should make changes based on national interest and leave no room for doubt. In addition to this, to have a scientific and practical national budget in the future, the procedures and standards that are required for budget preparation should be taken into consideration. For example, the government should start working on short-term and long-term plans to produce accurate statistical numbers. Although some work has been done in this regard, donors may not be needed in the most essential areas. If the government has accurate statistical data available, it can balance the budget distribution across provinces. The media, civil society and anti-corruption agencies should launch comprehensive programs for the general public in order to make the public aware of the right to share their views and wishes in the budget, and to make the relevant aspects available. Focus your work on the installation.