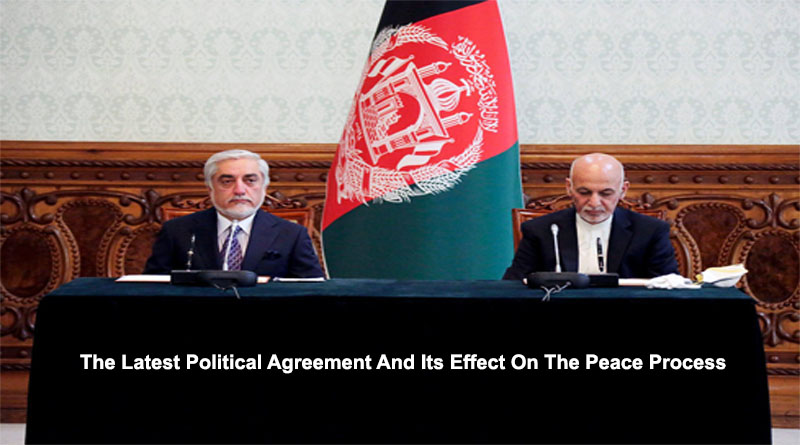 On 17th May, 2020, President Mohammad Ashraf Ghani and former CEO Abdullah Abdullah signed a political agreement to end a months-long political crisis in the country. According to the agreement, Abdullah Abdullah will lead the High Council of National Reconciliation and members of his team will be a part of the cabinet, through which, he will have authority over 50% of the cabinet. The deal is signed while the country is suffering from instability, increase in violence, economic and heath crisis caused by the Coronavirus. Both leaders have agreed to sign the agreement in order to make efforts to overcome the current challenges of the country.

Here, we discuss the details of the agreement, its difference with the unity government agreement, and its effects on the peace process.

In 2014, a similar controversy over the results of presidential elections arose between Mohammad Asharf Ghani and Abdullah, which persisted for months. The disagreement back then ended with the arbitration of John Kerry, former US Secretary of State, due to which both leaders agreed to share power and establish a Unity Government.

The Unity government established Abdullah-Abdullah-led chief executive office, which apparently contradicted the constitution. In addition, both leaders had an agreement to appoint officials of various administrations. These agreements were among the causes which triggered many problems and challenges within the five years of political power.

On the other hand, 2020’s agreement happened as result of arbitration by Afghan leaders. Instead of being Chief executive’s officer, Abdullah Abdullah is now titled as the chairman of the High council of National Reconciliation. The chief executive office was abrogated earlier based on a decree of President Ashraf Ghani. Also, High Council of Government will be established which will be comprised of political figures and will carry out advisory works for the president.

Based on the new agreement, General Abdul Rasheed Dostum, a member of “Stability and Convergence” team will be made a marshal of the armed forces. A five-membered arbitral delegation, comprised of national and political figures, will be appointed to oversee the implementation of the agreement and eradicate any possible challenges.

Latest Political Agreement and its Effect on the Peace Process

The Power-sharing deal between Ashraf Ghani and Abdullah Abdullah was signed after numerous efforts of national and foreign political figures to end the controversy. Three months earlier, both leaders were unable to establish an all-inclusive government. Later, serious efforts were made by Former President Hamid Karzai, Jihadi leader Abdul Rab Rasool Sayyaf and other influential figures to end the disagreements. As the new agreement happened due to the efforts of national political figures, the agreement should therefore be appreciated and respected. President Ghani also expressed his special gratitude for the efforts of political leaders.

According to the agreement, the chairman of High Council of National Reconciliation will have absolute authority in peace related affairs. Along with chairing of the reconciliation meetings, the chairman will also have the authority to appoint the members of the council and appoint staff of the government’s ministry in peace affairs.

The Council, which will have an independent Budgetary Unit, will be responsible to establish a national, regional and international consensus regarding peace. Also, the council has the duty to attract foreign aids and funds for the progress of peace process.

Although after the attacks in Kabul, Nangarhar and some other provinces the president ordered the Special Forces to take aggressive stance, but his behavior was soft and peaceful after the deal. He called peace a priority and said the country needs consensus regarding peace. He expressed positivity for ceasefire and peace. The president also titled Abdullah Abdullah as a suitable and competent person for the peace process.

Such statements from the president shows that there is still hope for peace and both leaders are ready to bring peace. Similar positive statements can also encourage the opposition (The Taliban) to soften their stance regarding peace and ceasefire. Although Suhail Shaheen, spokesman of Qatar Office of the Taliban said that Afghanistan requires a lasting peace and the recent political deal cannot resolve problems, but as Abdullah Abdullah’s slogan in the previous presidential elections was about bringing peace, therefore it can be hoped that peace process will hasten with the deal.

Since the last presidential elections, the country is facing political instability, massive economic challenges, and unemployment due to the lockdown of Covid-19.  If both leaders honestly intend to, their agreement can be effective in overcoming the challenges. While the deal is signed, Amrullah Saleh, Vice President of Afghanistan denounces the Taliban in Nangarhar and marked the latest attacks as their doings. If the intention is to bring peace, any declarations harmful for peace should be prohibited by the government. And to begin intra-Afghan dialogue, an environment of trust should be established, propagandas and negative publicity should be avoided and warlike literature in media should be replaced with advertisements of peace. Moreover, any attacks of vengeance should be stopped in order to bring peace.

With the deal, Afghans hope for reduction in violence which will consequently unlock doors for a lasting ceasefire. It is also expected that the current obstacles for peace talks such as, prisoners release issue will be resolved and an environment of trust will be established on the road for a lasting peace.

The latest power-sharing deal between Mohammad Ashraf Ghani and Abdullah Abdullah was welcomed on national and international level. Now, both leaders should prioritize peace and unlock doors for the reconciliation council, which is expected to bring consensus for peace. The leaders should not repeat the failed experience of a unity government. They should respect the sacrifices of the Afghan nation and spend all of their energy to bring peace and stability to the country.

If the agreement is aimed to stay in power, the result will be disappointment and failure will show its face as it did in the last five years. However, if intention of the deal is to bring a lasting peace, then they have got a historic opportunity. Hence, both leaders should to let go of their disagreements, work as a team and effectively take advantage of the opportunity created for peace.

With the agreement, Dr. Abdullah Abdullah has been put under difficult test because his slogan during the previous presidential elections was struggle for a lasting peace. Now, he will be tested whether he chooses the road for peace in his test and bring glory to his land, or chooses to remain on power under the name of peace, become a person who destroyed nation’s hopes for peace and disgraced his position.

Hoping for a lasting and just peace in Afghanistan.