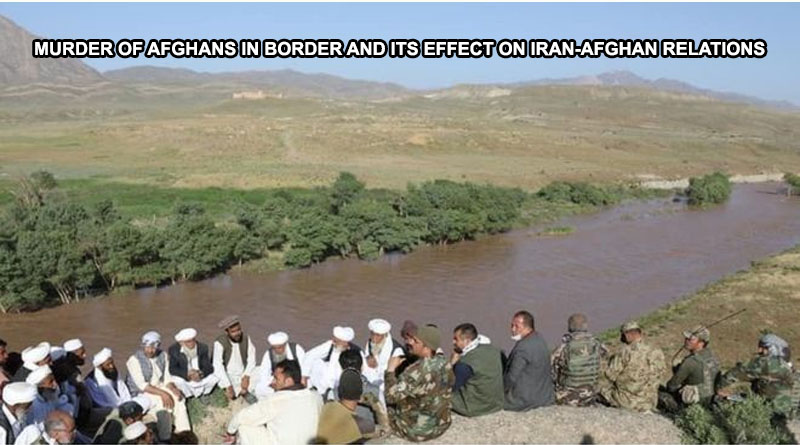 According to reports, a number of Afghan migrants were arrested by Iranian guards after they crossed the Iranian border on 12th May, 2020. The migrants were tortured and drowned in Harirod River. The alleged inhumane act arose serious reactions on regional and international level. The Afghan government termed it as an unforgivable act and has appointed a delegation to investigate the case.

Afghan immigrations to Iran started with the invasion of Russian forces. Currently, around 1 million registered and nearly 2 million undocumented refugees are living in Iran. Afghan migrants have faced countless abuses, violence and harassment. Although hatred and animosity of Iranian towards Afghan has been condemned by local and internationals previously, but the Afghan government, Iran and international community were unable appropriately defend the Afghan refugees and attain their basic human rights. The Center for Strategic and Regional Studies (CSRS) analyzes the drowning incident and its effect on the relations of Afghanistan and Iran.

Throughout decades of emigration, Afghan refugees have been harassed and discriminated by Iranian officials. According to the Human Rights Watch, Afghan refugees are only allowed to earn from extremely difficult and poorly paid jobs. The Iranian government has restricted refugees’ access to education, marriage rights and the right to defend their human rights. Thousands of Afghans who are in Iranian prisons for crimes like theft, trafficking, and murder are regularly denied the right to access lawyers.

According to The Guardian, in order to reduce the number of illegal emigrations to the country, Iranian government abuses children, splits families and forces adults to work without pay. In process of being deported, refugees are charged unreasonable fees, forced to work without pay and deported without adequate amount of food.

According to some Afghans who have been deported from Iran, living in Iran as an Afghan is like living as a criminal. Danish Institute of International Studies have interviewed some Afghans who have said “Iranians used to call us (dirty Afghan) and (Afghan trash). Humiliation of Afghans was something really normal. According to them, Afghans are bad and dirty people. They were thinking that we are not even humans at all. Animals were treated better than Afghans in Iran. Any Iranian is allowed to do anything to Afghans. There are many violence cases that are not being registered and Iranian officials keep silent about it”. Additionally, many other statements and interviews of violence towards Afghan refugees have been reported.

Based on the report of Khaama press, Iranian hospitals started refusing Afghan infected patients after the Coronavirus outbreak. Consequently, Afghan refugees, along with infected ones, started to return to Afghanistan.

On 9th May, 2020, around 50 Afghans who tried to cross the Iranian border with intention to work were caught by the Iranian guards. They were tortured and then drowned in Harirod River. A survivor of the incident told the France24 Observer: “We were around 50. We crossed the river while being tied together with ropes. There were old men and children among us. After we crossed the river and entered Iran, an Iranian patrol arrested us. They kept us overnight at the post. The next day they started insulting us. They made us strip naked. They kicked us and beat us with their rifle butts and a whip. Then they loaded us onto a minibuses and drove us a few minutes from the post. They told us to cross the river or they will shoot us. They fired some warning shots to frighten us. We decided to cross the river because we thought they would kill us. The border guards were laughing as we drowned”.

The world backlashed about the horrifying act of the Iranian border guards.  Mohammad Hanif Atmar, acting foreign minister of Afghan expressed his condolences and promised to pursue the issue using all diplomatic means. Mike Pompeo, US Secretary of State has also reacted to the incident and said “I will encourage Afghan officials to conduct full investigation and hold the perpetrators accountable”.

The US Principal Deputy Assistant Secretary of State for South and Central Asia Alice Wells has also reacted to the incident on twitter and Said “Iran’s cruel treatment and abuse of Afghan migrants alleged in these reports is horrifying, we support calls for a thorough investigation.”

Via proclamation, the Taliban have also condemned the latest act of cruelty by the Iran and has requested the Iranian government to deal with refugees through patience, Islamic brotherhood, and rules neighborhood. In addition, many nationwide political and social parties, national and political figures and the Iranian official condemned the act and termed it unbelievable.

The Afghan government has appointed a delegation to probe the incident, which has begun its investigation in the area on 13th May, 2020. The government has said that the issue will be pursued until justice is brought to the families of victims.

There are two sides involved in discrimination towards Afghans in Iran. First, The Iranian government who forces the refugees to leave the country by creating restrictions in access to parks, education and by insulting and harassing them.  Second, the people who trouble the Afghans on streets and roads, refuse to pay their wages and insult their race and nationality.

According to some analysts, Rivalry, racism and nationalism are among causes due to which the Iranians express hatred towards Afghans and which have affected the social relations between both countries. Considering the deteriorating condition of Afghanistan, Iranian are trying show their greatness and make the Afghans feel Inferior by harassment, abuse and violence.

The plummeting economy of Iran can be considered as another reason for their intensity in discriminative behavior. As result of various economic sanctions by the US during the last few decades, Iran’s economy has been collapsing. The Iranian government has said that they are incapable to accept and manage refugees while being sanctioned.   In addition, Iranian researchers have found that presence of Afghans in Iran negatively affect the labor markets and all sectors of the country are lacking working opportunities.

Although the poor and unsuccessful diplomacy of the Afghan government may not bring perpetrators into justice, but the incident will definitely impact political ties between the two countries. Despite many problems and restraints, the Afghan government has been impartial in US-Iran tensions. If Iran does not transparently investigate the incident, and does not apologize for the act, the impartiality of the Afghan government may fade and the US may find a reason to provoke Afghanistan against Iran. In addition, the Harirod river execution is a legal and criminal incident. Nobody has the right to forgive the perpetrators except the families of the victims. If they cannot bring them justice, Iranian officials can at least pay the victims the blood money.

As the region is already in turmoil due to US-Iran tensions and the Afghan war, the recent act of violence and any other similar doings are beneficial for none of the countries. Such acts are not only inhumane, but can cause political and economic hostility. Therefore, leaders of both countries should not only strive to seek justice for the families of victims but make efforts for human compassion, better neighborhood and constructive political and economic relations between both countries.