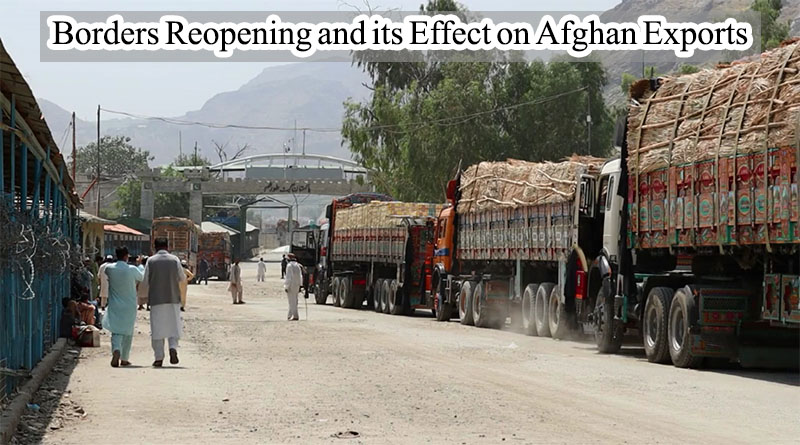 The coronavirus pandemic has affected many countries globally. Along with other areas, Exports and imports have been particularly affected. Since Afghanistan largely exports to Pakistan, exports were negatively affected when Pakistan closed borders due to covid-19 outbreak from March, 2020 to 22nd June, 2020. Pakistan has closed borders with Afghanistan on several occasions before the pandemic, which has severely damaged trades and businesses. Here, the center for strategic and regional studies (CSRS) discusses challenges that are facing Afghan exports to Pakistan, how to overcome them, and how the borders reopening affect exports.

A Quick Review of the Exports of Afghanistan

Afghanistan’s exports contains 20% of the country’s Gross National Income (GNI). Its lowest aggregate has been 69.1 million USD and its highest was 875.24 million USD. In 2019, the total exports of Afghanistan reached 863.83 million USD, due to which, Afghanistan held 141 rank in the list of exporting countries.

Afghanistan mainly exports grapes, other fruits and dried fruits, vegetables, rugs, coal, gemstones, and some other goods to several countries including the followings:

Afghan exports are too low compared to imports and reaches only 5% of the imports.

As Afghanistan is a landlocked country, it has been facing various problems to export. In addition, politics and security-related uncertainties have also negatively affected exports of Afghanistan. For instance, when diplomatic relations are not in a good form or if a terrorist attack occurs in Pakistan, trade between both countries, especially Afghanistan’s exports, are severely affected. Consequently, Afghanistan’s traders faces millions dollars losses as Pakistan usually blames Afghanistan for attacks, and therefore, closes border.

In order to mutually benefit from trade, Afghanistan and Pakistan sighed APTTA (Afghanistan-Pakistan Transit Trade Agreement) in 1965 which was revised in 2010. According to the agreement, Afghan merchants are allowed to export goods to India through Pakistan and vice versa. In return, Pakistani trucks will be permitted to access any market of Afghanistan. However, Pakistan has always one-sidedly misused the agreement and has taken advantage of Afghanistan’s enclosure by land. As a result, Afghanistan’s exports were negatively affected.

Pakistan is a nearby and economical market for Afghanistan and import most of goods from the country. Similarly, Pakistan is also a bordering market for Afghanistan’s exports. However, due to distrust and uncertainties between both countries, trade opportunities have been challenged many times. Consequently, both countries have been financially affected in trade sector.

In 2014, Pakistan closed Ghulam Khan Port during its military operations in Waziristan. In addition to this, Pakistan has closed Turkham and Chaman passageways with Afghanistan every time when a terrorist attack has occurred or political relations have debilitated.

In March, 2020, Pakistan has closed all borders with Afghanistan due to the coronavirus pandemic. The outbreak was called “global epidemic” and caused prices increase in several provinces including Kabul. This was due to inability of Afghanistan to import from Pakistan and export to other countries during the pandemic.

Later, Pakistan reopened the Turkham and Chaman gates for three days upon request of Afghan officials and allowed imports for the duration. On 20th June, 2020, Ayesha Farooqi, spokeswoman of the ministry of foreign affairs of Pakistan declared that Turkham, Chaman passageways and Ghulam Khan port will reopen for 6 six days of every week and passengers of both countries will be allowed to cross the border the next day. Seemingly, reopening of borders is not only in favor of Afghanistan, but a huge advantage for Pakistan and its government.

Afghanistan’s Exports and Some Challenges

As Afghanistan mainly exports vegetables, fresh and dried fruits, they have become a great source of income for Afghan traders and farmers. Although the Afghan government has promised to overcome the current obstacles, but traders and farmers are still waiting for action.

It has happened many times when farmers are unwilling to represent their products to the market since the expense of accessing the markets is higher than its income. For instance, farmers in Farah province always claim that they sell 1 kilogram of watermelon for 1 Afghani. And so, farmers are facing many economic problem.

Pakistan has not only increased tariff on Afghan exports, but checks every truck of fresh fruits. As a result, fruits and vegetable rot during delays for checkups.  Also, goods exported to Pakistan are reimported to Afghanistan as Pakistan’s exports. Absence of a particular strategy for trade with Pakistan is among the causes of the challenges that are facing exports.

The coronavirus crisis has severely affect global trade and economy. Hence, it is necessary to encourage Pakistan to mutually implement the APTTA agreement so that trade between both countries is not affected by political and contemporary issues. Afghanistan’s trade with Pakistan has been negatively affect by US force pullout. The complete pullout of the US forces may further push exports to abysses and Afghanistan’s economy may collapse. This is because political dissension may rise and foreign exchange will fall and insecurities may intensify after the pullout.

Therefore, the Afghan government should thoroughly review the current policies of exports and imports. After his second election as the president of Afghanistan, Ashraf Ghani ordered the ministry of foreign affairs to encourage embassies to attract demand for Afghan products in foreign markets. Although his instructions in this regard is admirable, but more effective steps need to be taken in order to increase exports of Afghanistan

In addition, the Afghan government should resolve the current problems of Visa, tax, and border opening and closure for Afghan merchants. Also, the government should encourage those products that have higher income and can help to reduce imports, so that the country can satisfy its needs from within the country.