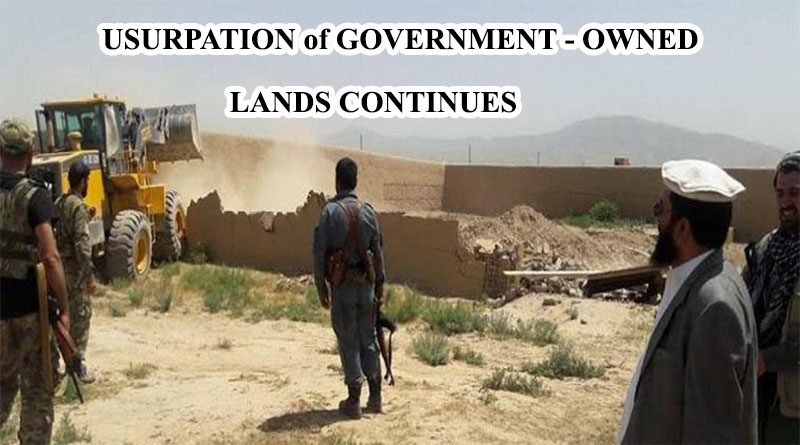 According to Pajhwak News Agency, the mayor of Kabul has sanctioned certain rights to several businessmen and parliament members which empowers land usurpation of government lands and green areas. It is being said that Dawood Sultanzoi has endorsed illegitimate orders after his appointment as the mayor of Kabul. Pajhwak’s evidence shows that he has decreed an exceptional command which allows a private company to establish a building on a land that belongs to the ministry of education in zone 12. In addition, he has extraordinarily endorsed construction on 12 Jerib[1] (5.9 acre) government-owned land for some members of the parliament in zone 8.

Land usurpation has been a great challenge for Afghanistan throughout a few decades. During the last 18 years, around 50,000 jerib (24710.5) land has been appropriated in Kabul province. The government has strived to recapture the lands several times, but the attempts were unsuccessful either due to the government’s inability to confront the influential warlords (who are mostly armed), or the government kept silent aiming for reconciliation.

On 16 January 2021, 8 AM newspaper published a report which claims that around 2 million jerib (988421.5 acres) land has been stolen in Afghanistan. Meanwhile, the senior advisory of construction and aesthetics for the president has declared to Hamid Karzai, former president of Afghanistan that around 4.5 million jeribs (2223948.4 acres) agricultural, rural and urban lands of the government have been seized. Among those who have usurped the lands include vice presidents, deputy ministers, high ranking officials, and members of the parliament, jihadi leaders, local influential figures and even ordinary people. The report was extensive and comprehensive enough that officials of the advisory were even threatened by some powerful figures and they were carrying out their duties under a special protection of security forces.

Usurpers have not only seized state-owned properties but have appropriated lands of civilians. Hindu citizens who lived in Afghanistan for years before the fall of Dr. Najibullah administration, and the charge of Mujahidin to cities. Back then, they were owners of lands, houses, and numerous properties. After the attack of mujahidin, enduring wars and establishment of Taliban’s administration, Hindus were forced to temporarily leave Afghanistan. After their return, however they witnessed that they have lost their lands and houses, and have no power to regain their land ownerships. Overall, 90% of Ahl-e-Hanud’s lands have been stolen and they are unable to get their lands back.

An establishment called “home of freedom” published an article under the name of “a dark chapter of land usurpation” in February 2020, for which, the researchers have interviewed 70 government officials. According to the article, most of the lands were usurped during the 14-year administration of Hamid Karzai, a former president of Afghanistan. In addition to Kabul where most of the lands were usurped, Heart, Balkh, Kandahar, Nangarhar, Kunduz, Kapisa, Baghlan, Takhar, Nimroz, Khost, Logar and Ghazni are the provinces, where land usurpation is comparatively high. Also, Nooristan, Paktika, Panjshir, Daikundi and Ghor were provinces where lesser land was usurped as these provinces have fewer areas to be stolen. According to the officials of the home of freedom, the government has sufficient information about land usurpation, but no steps were taken to confront usurpers.

Who Have Usurped the Lands?

In July, 2019 the ministry of Urban Development and land announced that 1500000 jerib (741316 acres) land has been appropriated all over the country. According to the ministry, more than 18 thousand individuals are involved in these usurpations. Among them, 15 thousand have been introduced to justice and prosecution units. In addition, findings of the ministry show that most of the land usurpations are undertaken by local vigorous figures. The spokesman of the ministry of urban development and land has told the Voice of America that more than 500 thousand jerib (247 acres) land has been freed from the hands of usurpers.

According to the statistics of the ministry of economy, 138996 jerib[2] (68693.3192 acres) land has been officially registered as stolen. In addition, the statistics shows that 1241 jerib (613.3 acres) has been usurped in Heart, 20500 jerib (10131.3 acres) is usurped in Nangarhar by 13 individuals, 1714 jerib (847 acres) land is usurped by 15 individuals in Kunduz, 11426 jerib (5646.8 acres) is appropriated by 11 individuals in Kabul, and 5345 jerib (2641.5 acres) land is usurped by two individuals in Parwan province. However, since the issue contentious, the government is also not willing to name the usurpers. Lands have been stolen for years but the actions taken by the government were not gainful.

To prevent land usurpation, the unity government commenced government-owned lands registration. Later in May 2020, it was declared that more than 6 million jerib (2965264.5 acres) government land has been appropriated. The acting minister of urban development and land stated that a key mission of the process is to identify and register state-owned lands, prevent land usurpations, distribute lands to eligible individuals and implementation of projecting aiming for public utility.

Members of the anti-corruption commission admit that the size of usurped lands is far wider than the statistics since deserts and expansion of cities like Nangarhar, Kabul, Mazar-e-Shareef, Heart and Kandahar are also to be counted.

Efforts to Reclaim the Appropriated Lands

Thus far, only 400 thousand jerib (197684.3 acres) land has been reclaimed by the government. Meanwhile, combat with land usurpers is expensed for political reconciliation.

Although efforts have been made for land reclamation during Hamid Karzai and Ashraf Ghani’s administration, efforts were not successful enough to eliminate the roots of the problem. Land usurpation has become a great obstacle for the government, as most of the usurpers have made fake documents for the lands. Most of the stolen lands have become residential areas and lands have been sold to ordinary people. Hence, it is difficult for the government to displace ordinary people, who have bought the lands, out of their homes. Moreover, most of the usurpers live outside Afghanistan and those whose lands have been stolen are no longer striving to reclaim their lands.

Considering the current circumstances, it does not seem to be possible to implement President Ghani’s promises of 15 February 2018 planning to implement a project against land usurpation. Then, he forewarned that he would establish a special court for usurpers and if they do put an end to their actions, their names will be uncovered to the media. However, there were no remarkable actions taken in this regard during the unity government. To be precise, there are no laws and regulations sanctioned, according to which, land usurpers can be dealt with. In addition, prosecution and justice establishment are powerless against usurpers. As a result, the government was unable to take action against land appropriations.

In order to prevent land usurpation, a firm decision and continuous implementation of the process is required. Although a law to prevent land usurpation and illegal appropriation was endorsed by the parliament on 23rd September 2013. However, the problem is still considered as an untreatable disease for the country. The government was not only unable to reclaim the appropriated lands, but such usurpations are still being carried out. The government can prevent further illegal land appropriations by commencing projects to recognize and register state-owned lands, prevent further usurpations, facilitating economic and developmental plans and projects, commencing an infrastructural project, leasing lands to the private sector, and distributing lands to displaced citizens, immigrants, and the families of the martyred citizens. Most importantly, establishing a culture of dishonoring the acts of land usurpation among the people is vital. Unfortunately, very little work has been done in this regard.