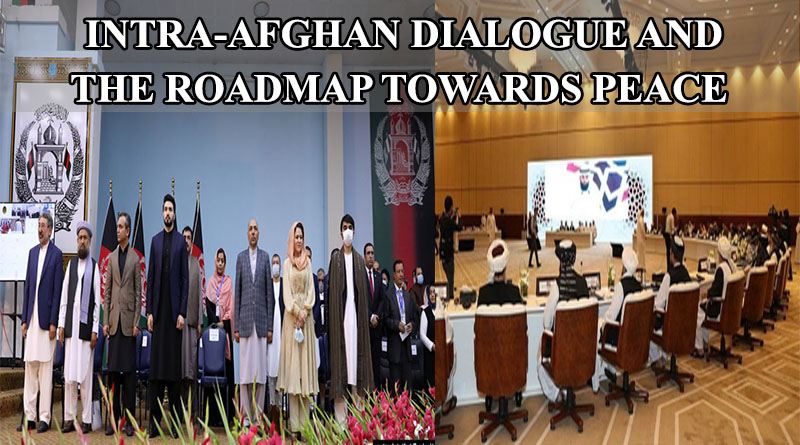 Based on the peace agreement between the Taliban and the US, the intra-Afghan dialogue was planned to commence on 10th March, 2020. However, the dialogue was postponed due to disagreements over the prisoners’ release.

On 2nd September, 2020, the Afghan government announced that all prisoners of the Taliban have been released, except 7 prisoners who are convicted of killing 7 French and Australian soldiers and might be shifted to Qatar. Here, Center for Strategic and Regional Studies (CSRS) analysis the intra-Afghan dialogue.

Issue of Prisoners and American Troops

The intra-Afghan dialogue was supposed to commence after the agreement of peace between the US and the Taliban. As the prisoners release issue was the main obstacle towards the dialogue, the latest development in this regard was welcomed by the countries in region, the UK, Germany and the US.

Zalmai Khalilzad, US special representative for Afghanistan reconciliation has commented on prisoner release issue and has said that Afghans are currently much closer to a golden opportunity of bringing peace to Afghanistan and the must take advantage of it. In addition, declarations of Dr. Abdullah Abdullah, chairman of high Council for National Reconciliation about prisoners’ release and commencement of intra-Afghan dialogue indicate that Afghans are truly presented with an opportunity for peace, which should be efficiently utilized.

According to the agreement between the Taliban and the US in Doha, the US will withdraw all of their armed forces from five bases of Afghanistan. Although the US has pulled out a number of soldiers, but on 3rd September, 2020, the US secretary of defense proclaimed that 3,000 additional soldiers will be withdrawn from Afghanistan in the near future. If the drawdown of US forces continues and the withdrawal is accomplished according the schedule, it will be considered as a great development in the peace process.  Although the US president has given green light to the pullout and has stated that number of US soldiers will be reduced from 5,000 to 4,500 before the presidential election in US, but the US department of defense may have different viewpoint in this regard.

Based on the Doha agreement, the Taliban will discuss ceasefire with the Afghan delegation during the dialogue. Although the prisoners release process has been completed, but war is still intensely in progress and both sides are facing heavy casualties.

Despite the release of the last group of inmates, the ongoing hostilities in Nangarhar, Baghlan, Sar-e-Pol had heavy casualties to both sides including civilians. Implementation of a proper mechanism for ceasefire can prevent those who are striving to sabotage the peace process. If ceasefire is not implemented, continuity of war will give opportunity to those local and international elements, whose interests are at risk, to create obstacles for the Afghan peace. For instance, attempts might be made to increase violence or assassinate prominent political figures, which may cause distrust between the Taliban and the Afghan government. Therefore, an environment of trust should be established so that any potential risks and obstacles can be avoided.

The Afghan government has appointed 20-member delegation for the intra-Afghan dialogue which include scholars, political parties, youths, women and civil activists. The delegation contains members who seem to have insufficient experience in resolving peace-related and national matters. Still, the government expects the delegation to attain remarkable achievements in bringing peace to Afghanistan. This is also due to the fact that Masoom Stanikzai, the leader of negotiating team is an experience person and has worked as a high ranking official of many key positions of the government.

Although the government has appointed a balanced team by including various politicial parties, but Hezb-e-Islami party has declared that they will also participate in face to face negotiation with the Taliban. Such viewpoints not only raise questions about the authorities of the delegation, but indicate diverse ideologies and standpoints of the nation. Therefore, in order to establish an integrated viewpoint about peace, the government needs to closely work with prominent political figures, representatives of different tribes and academic personalities and obtain their support.

Priorities for the Intra-Afghan Dialogue

Therefore, both sides should commence discussion about narcotics, security, all-inclusiveness of the government, corruption, transparency and accountability in an effective manner, so that the people can enjoy peace and security as soon as possible. This is because the mentioned matters have always threatened the security, social stability and economic development of Afghanistan. In this regard, the international community also encourages Afghan officials to take actions about these matters. However, implementation of a comprehensive ceasefire can eliminate many obstacles on the way towards resolving these matters. If ceasefire does not happen, Afghans might lose the opportunity for peace.

Also, neighboring countries are expected to stand beside Afghans during the historic period of bringing peace. This is because a lasting peace is not only advantageous for Afghanistan, but will have positive effect on the economic development and prosperity of the region.