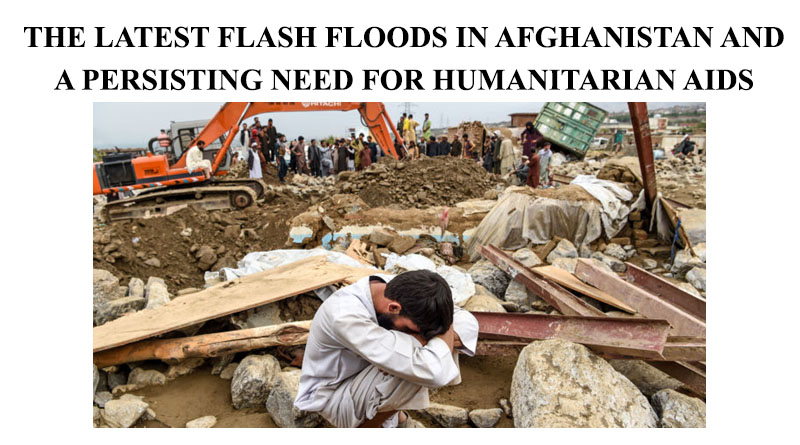 Although Afghanistan is among the countries which experiences various natural disasters every year, but the recent catastrophe caused by flash floods were distinctively harmful since similar disaster has rarely occurred within the last decade. Here, we evaluate the latest floods of the country.

In addition, 10 thousand quadrupeds were killed, thousands of hectares of agricultural land, gardens and markets were washed away, and many vehicles were harmed the floods in 14 provinces.

Among the affected territories, Charikar city of Parwan has experienced the highest number of casualties and damages. According Ghulam Bahaudin Jailani, minister for disaster management, 121 people are killed, 136 got injured and 15 are missing due to floods in Parwan. Most of the injured and killed people were children and women. According to minster Jailani, rescue teams are still operating in the area and the number of casualties may rise.

Due to the flash floods in Parwan, around 500 houses, shops, hundreds of hectares of agricultural land and gardens, and a number of vehicles were also damaged and washed away. Since the rescue operations have not been concluded, the reports of casualties and financial losses may vary in the forthcoming days.

Also, the canal of charikar city has also been damaged. The canal was a key source of watering agricultural lands, gardens and underground water reserves for most of the people of Parwan.

In addition to Parwan province, Kapisa, Kabul, Nangarhar, Maidan wardak, Paktia, and Panjshir respectively had 20, 10, 8, 8, 1, and 3 casualties due to floods. Although the financial losses have not been estimated, but the floods have possibly caused hundreds of millions Afghanis worth of losses to the people.

In order to combat the disaster in the affected 14 provinces including Parwan, many renowned figures, government officials, charity organizations, compassionate individuals and security forces stepped up to help the victims of the flash floods.

Tamim Azimi, Spokesman of the state ministry for disaster management of Afghanistan has stated that food supplies have been distributed to 14 thousand affected families in the 14 provinces. He has further added that the relief operations of the government will include distribution of 50,000 AFN to the families of each martyred and 25,000 AFN to the families of injured individuals. So far, 106 families have received the monetary assistance in Parwan.

The Afghan National Army has also contributed in various ways, including rescuing the victims who were stuck in the affected areas.

Likewise, international organizations such as USAID, UNICEF, WFP, the Red Crescent society of Iran and the NATO have also announced aids for the victims of the flash floods in Afghanstan. Also, some prominent political and non-political figures, charity organizations, companies, and civil societies of the country have presented their humanitarian aids to the victims in 14 provinces. Among them were Ehsas charity organization and the AIMA (Afghanistan Islamic Medical Association) whose volunteers have taken part in rescue and relief operations in Parwan and Maidan Wardak and financially assisted 110 affected families in Parwan. In addition, volunteers of AIMA have provided health services for the affected families of Parwan province.

Families are undoubtedly suffering from the effects of flash floods in 14 provinces of the country. Millions of dollars need to be spent in order for the people to recover from the damages. Therefore, humanitarian aids must be spent transparently and should be kept away from corrupt individuals. In addition, affected territories should be categorized and should be prioritized according to urgency of assistance.

Firstly, roads, streets, residential areas, agricultural lands, gardens, shops, canals and gutters should be cleaned, which according to government official, the process has already commenced and some roads and streets have been cleaned up and re-opened transportation. President Ashraf Ghani has assured the governor of Parwan that he has appointed the ministry of finance and operations unit of the president’s office to prepare a reconstruction plan for Charikar River.

Secondly, the affected families should have supported to an extent so that their homes can at least become fit for living, though, such action requires sufficient budget and assistance from the society. In addition, distribution of residential lands to victims might be necessary as the washed away homes and lands may not be habitable.

Thirdly, the affected families should be helped to return to their homes. In this regard, assistance from the government and the people is undeniably needed.

Some affected families have utterly of partially lost their properties. Therefore, they should be helped so that they can stand on their feet once again.

The country got hit by floods when it is still recovering from the severe effects of the coronavirus pandemic. To support the survivors of floods, many national and international organizations, individuals, political and non-political figures contributed to the emergency disaster relief operations, which is appreciated. However, after the basic emergency relief services, supporting the survivors the get back to their normal lives is vital and will cost millions of Afghani.

Although it is the responsibility of the government to facilitate normal lives to the victims of the flash floods, but it is also a moral responsibility of national and international establishments to honorably back the people of Afghanistan in difficult conditions. Aids from local charity organizations, businessmen, and compassionate individuals of the society are also valuable. In addition, the role of mosques to media centers in shaping the thoughts and monitoring relief operations of the government is key and vital. Also, research institutes can uncover the roots of the disaster, prepare innovative strategies and plans for resolving disasters related matters, and propose precautionary measures via researches to the authorities for decision making.