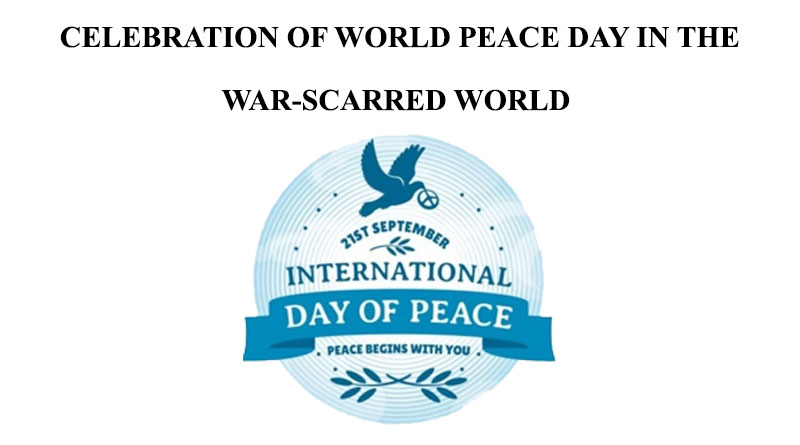 The first and most important goal of international relations according to article 24 of the charter of the United Nations is to maintain global peace and security. Peace literally means “compact, Friendship and Treaty”. Dictionary of politics defines peace as tranquility, Normal state of relations between countries, absence of war and threats to a country. Peaceful coexistence between countries means compliance with rules of governance, equality, security, land integrity, avoidance of interfering in internal matters of countries, and offering solutions to international matters.

As protection of lineage and life are among the fundamental objectives of the Islamic law, therefore, Islam has also advised Muslims to have peaceful relations with other nations. Islam does not allow anyone to kill someone based on religious differences. According to the Islamic law, a Muslim society should have relations with others based on justice and mutual respect. Qur’an states this matter beautifully in verse 8 of Surah Mohmtahena and says: “Allah does not forbid you from those who do not fight you because of religion and do not expel you from your homes – from being righteous toward them and acting justly toward them. Indeed, Allah loves those who act justly”.

Islam emphasizes that human beings should live in harmony and peace. Even when the enemy feels weak and offers peace, Muslims are ordered to rely upon Allah and accept their peace offer. Qur’an says: “And if they incline to peace, the incline to it [also] and rely upon Allah. Indeed, it is He who is the Hearing, the Knowing” (Surah Al-Anfal, Verse 61).

According to the Islamic jurisprudence, peace means “Altardhi wal Tassalam Alal Amr”, meaning “Acceptance and submission of two sides over an issue”. When the prophet (S.A.W) introduced the religion of Islam to the people, most of the tribes opposed him. Subsequently, he was forced to migrate to Madinah and fight with the enemies of Islam, which toke around 6 years. Later, he pursued the strategy of peace which led to Hadibiyah peace treaty which was one of the most valuable and outstanding achievement regarding peace. His conduct with far-off nations was based on Dawah (Invitation to Islam). After establishing an Islamic state in Madinah and conquering Makkah, the prophet (S.A.W) sent letters to other rulers and invited them to Islam. This deed of the prophet (S.A.W) indicates that Islam wants to resolve matters through peace.

Ongoing Wars in the World

The word “war” represents antagonism and coercion, through which, a government undertakes actions to force another country to its obedience. Military theorist Carl von Clausewitz has said: “war is nothing but a continuation of politics with the admixture of other means”.

So a question raises that who profits from war while the entire humanity disgusts it? The answer is, when there is no war, countries of the world would not need to buy weapons from the most powerful countries of the world. Security and arms production corporations strive to trigger a reason to in order for countries to buy their weapons and chemicals. Hence, wars and animosity is augmented through systematic plans and strategies, resulting increase in profits to companies and higher amount of taxes being paid to their respective governments. Currently, many companies produce weapons all around the globe, but only 6 of them are American companies which are the largest arms producers, profiting the most from wars in the world.

Contemporarily, causes of wars are comparatively complex, among which are the arms producing companies and their profits. Arms dealers and businessmen are mostly involved in the ongoing wars and has relations with high ranking officials in third-world countries. After the 11th September incident, conflicts between armed groups and governments have increased and intensifies day by day. According to researches of the institute for economics and peace in 2019, middle east and north Africa (Iraq, Syria, Yemen, Libya, Egypt, Southern Sudan, Palestine, Iran, Turkey, Somalia, and Nigeria) have comparatively poor security and are deprived from peaceful lives. However, insecurity in the middle east and North Africa is not a new story, but has been going since oil were discovered in these areas. Due to these insecurities and wars, the largest producing countries are easily and cheaply accessing oil resources, which is considered another cause of war.

On the other hand, presence dictatorial governments and puppets of the west have caused revolts and insurgences among the people which have subsequently led to civil revolutions and wars. In the beginning of 2011, many revolts in some Arab countries, Syria and north Africa occurred which was called “the spring of Arabs”. The revolts were against corrupt and despotic governments which either resulted in fall of some governments or led to a persisting civil war and a door for foreign interferences.

In addition, insecurities and instabilities in various countries such as the Afghan war, crisis in Venezuela, Ukraine, Pakistan, Myanmar, Congo and others are mostly caused by hidden interferences of the most powerful countries of the world. In order for the powerful countries to create unions and attain allies, weaker countries either willingly or coarsely change their foreign politics due to pressure of war and insecurities. Although the powerful countries apparently speak of global peace and security, but their stand only persist until there are no obstacles and problems for their interests.

Afghanistan in the Search of Peace and Stability

Although Afghanistan has been suffering from war since 40 years, but war between the government and the Taliban since 2001 has caused heavy casualties to the people. The war has caused fatalities to both sides, but the people have distinctly suffered from it. According to the statistics of Watson Institute, 111000 people have been killed in the Afghan war between 2001 and 2015. In addition, Mohammad Ashraf Ghani, the president of Afghanistan has stated that 28592 soldiers and police officers have been killed solely between 2013 and 2015. Based on estimates of Oxford University, the total economic loss of the Afghan war reaches 20,815 billion dollars, while the development budget of the country in recent years has not exceeded 1.6 billion dollars.

The Asia foundation conducted a survey in 2019 which indicates that 89% of the people of Afghanistan supports negotiations with the Taliban and 64% believes that agreement with them is possible. The survey has interviewed 17,812 men and women in 34 provinces of Afghanistan. Therefore, the people welcomed the agreement between the Taliban and the US in February, 2020.  Subsequently, the intra-Afghan dialogue was commenced on 5th September, 2020 in presence of representatives of the international community in Doha, Qatar. While we writing these lines, the two negotiating teams are drawing the map towards peace and the people of Afghanistan are eagerly waiting for positive results.

We hope that the commencement of intra-Afghan dialogue will lead to an ever-lasting ceasefire and peace in the country.