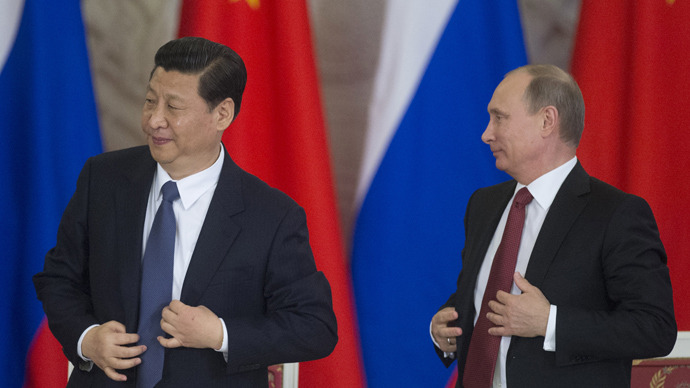 It seems that with the withdrawal of American forces in Afghanistan and extending the war in this war-torn country, the regional countries are trying to prevent the negative consequences of withdrawal. China and Russia are among the neighboring countries of Afghanistan that have concerns about this situation. These concerns have increased especially after the group of “Islamic State” started its activities in Afghanistan.

During the visit of Masoom Stanekzai, the acting Defense Minister of Afghanistan to Beijing in order to attend the Sixth meeting of the Strategic Studies Institute of China, the Chinese authorities expressed their readiness for military assistance to Afghanistan. In this visit of Masoom Stanekzai, he signed a memorandum of cooperation between the Defense Ministries of Afghanistan and China with China’s Deputy Chief of Stuff. In May 2015, Noorulhaq Ulumi, the Interior Minister of Afghanistan in his visit to China had also signed a memorandum of Bilateral Cooperation with his Chinese counterpart.

On the other side, Gen. Abdul Rasheed Dostum, the First Vice-President of Afghanistan had requested military assistance from the Russian Federation in his visit to Moscow. In this analysis, the possibilities of these two countries’ military assistance to Afghanistan, considering the latest developments in the international relations, will be discussed.

The Background of Sino-Afghan Relations

Afghanistan and China, as the two neighboring countries, have had friendly relations for centuries together. Once, the Silk Road was the trade route of the vast country of China to Europe and these commercial caravans were passing through Afghanistan. In the past, China had fruitful cooperation with Afghanistan in the irrigation projects.

China was one of the countries which had supported Afghans during the Soviet invasion of Afghanistan. This country had always called for the withdrawal of Soviet troops from Afghanistan at the United Nations.

With America’s invasion of Afghanistan and the overthrow of the Taliban regime, China welcomed the new developments in Afghanistan. Chinese were hoping that America’s war on “terrorism” will take the region out of extremism and violence toward peace and stability and as a result, it will enhance economic cooperation between the countries that China is hardly in need of.

China invested in the largest mining project in Afghanistan’s Aynak copper mine near Kabul as well as in oil extraction in the area of ​​the Amu Darya in Northern Afghanistan. Over the past fourteen years, China has helped Afghanistan in various sectors that were related to the reconstruction of Afghanistan.

During Hamid Karzai’s visit to Beijing on 8 June 2012, a document of strategic cooperation containing 9 articles signed between the Presidents of both countries; this document was emphasizing on expanding cooperation between the two countries in the political, economic, cultural and security areas.

What is behind China’s increasing Concerns?

China, however, does not have a long border with Afghanistan and it is also located in heavily impassable areas, but the challenges of war in Afghanistan can impact this powerful country. During the Taliban regime, delegations from China were travelling to Afghanistan on a regular basis and as the Uyghur fighters were receiving military training inside Afghanistan; they were expressing their concern over this issue, and each time, the Taliban were promising that they would prevent this work.

China did not recognize the Taliban government but it kept its relations normal with Kabul. That’s why the Taliban consider China as a country that can play a positive role in the Afghan peace program today.

On the other hand, China and Pakistan have close and friendly relations and that is why the Afghan government also hopes that China’s influence on Pakistan would be fruitful in the Afghan peace process.

The importance of China for Afghanistan led Ashraf Ghani, the Afghan President to head to Beijing in his second official foreign visit right after taking power and exchange views on different issues including the Afghan peace process with Chinese officials.

The possibility of Russia’s military cooperation

After the beginning of the withdrawal of foreign forces from Afghanistan, the Afghan government found that the Afghan forces are as well trained and equipped as Westerners were initially promised. Karzai repeatedly complained about the situation and accused America with breaking its promises. He had repeatedly emphasized that if Western countries do not equip the Afghan forces as it needed, so he has to have cooperation with other countries that his aim was the Russian Federation.

The National Unity Government (NUG) has also recognized the same problem. Perhaps, the appointment of former Communists in the important military posts was to encourage Russia to provide Afghanistan with military assistance.

Alexander Mantysky, the Russian ambassador in Kabul for several times has spoken of his country’s readiness for providing military assistance to Afghanistan. General Abdul Rashid Dostum after his visit to Russia said that the Russian authorities are ready to give modern weapons and even war planes to Afghanistan; however, it seems that fulfillment of these promises needs money. Previously, America had bought a number of Russian helicopters to Afghan forces from Russia which some of them had become destroyed during the conflicts.

The Afghan government with very simplicity thinks that insecurity in the north and the activities of Daesh can encourage the Russians to provide Afghanistan with military assistance, but the military balance has been changed in the region with Russia’s military intervention in Syria. As far as the relations between Russia and China become closer, ties between Russia and Pakistan are expanding, also.

The regional policies of Beijing and Moscow

China and Russia cannot stay away from events in Afghanistan and the get use of each step of the mistakes of America in favor of expanding of their influence in the region. While America has lost the game to Russians in Ukraine and Syria; for the Americans to deal with China and Russia in the region, only the battlefield inside Afghanistan and the back of the battlefield “Pakistan” remained.

Pakistan is more important to Russians than Afghanistan; because Afghanistan, during the past fourteen years and even in the presence of 150 thousand foreign soldiers, counted itself defenseless against Islamabad. Russians believe that America and the West implement most of their plans in South Asia through Pakistan; and therefore, Pakistan is important for the future of Afghanistan and Central Asia and so they should become closer to this country.

Vladimir Putin in 2011 had said that Pakistan could be a good friend of Russia in South Asia and the Islamic world. Strategic negotiations started between Russia and Pakistan began in 2013. In June 2015, Raheel Sharif during his visit to Moscow discussed about military cooperation between the two countries, and in July, Nawaz Sharif met Putin on the sidelines of the UFA conference. In October, an agreement was signed between Russia and Pakistan which make the Russian public company of (Rvstyk) to build a pipeline that length 1,100 km from the liquefied gas terminal of Karachi port to Lahore which will cost between 2 to 2.5 billion dollars. The project will be completed in 3 to 4 years.

In August, Pakistan and Russia agreed that Russia should give four MI-35 helicopters to Pakistan in order to fight against terrorism and also negotiations to buy weapons and military equipment including aircrafts of type (Su-Khu) are going on.

After years of war in Afghanistan, it seems that Russia and China have reached the conclusion that they should deal with Pakistan in order to curb insecurity in Afghanistan, because the Afghan government itself believes that the key to peace in Afghanistan is in hands of Pakistan.

Considering these issues, it seems unlikely that China and Russia will provide the Afghan government with heavy weapons, and hence, put the Taliban, that are fighting against Daesh, in a position to eventually join it. The complexity of the situation in Afghanistan has caused the regional countries to have cautious approach to this country.