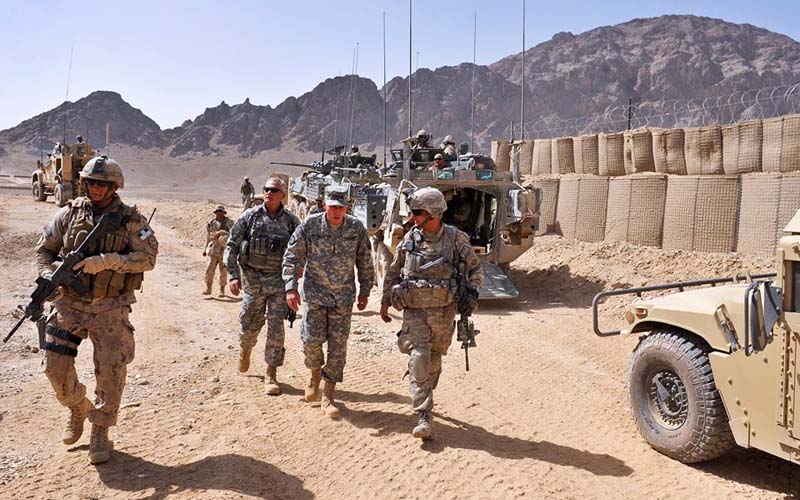 Last week, the US President Barack Obama announced his policy about the stay of American troops in Afghanistan. According to this new military policy, the American force of 9,800 troops would remain in Afghanistan through most of 2016, before dropping to 5,500.

You will be reading the analysis about American military policy in Afghanistan especially regarding the steps of the withdrawal of its forces, the reasons behind this new military policy, the position of Afghanistan in the American foreign policy and the impact of the continued presence of the American troops on peace, security and the current situation in the country.

The air assaults of US on Afghanistan started by October 7, 2001 and almost 13000 American soldiers had presence in Afghanistan by November; this number increased by 20300 in April 2004, then. At that time, America became involved in the war of Iraq and focused its entire attention on this country. Therefore, the number of U.S. soldiers reached to almost 25000 by the end of 2007.

The number of American forces in Afghanistan exceeded by 60000 in 2008 and 2009. After Obama won the 2008 Presidential Elections under the slogans of “Change” and “Ending Two Wars”; Afghanistan once again became considered in the U.S military policy. From a hand, Obama withdrew its forces from Iraq and from another hand decided to send 33000 fresh troops to Afghanistan by the end of 2009; however, at the same time, he announced the withdrawal of his forces by mid-2011, also. Hence, the number of American soldiers in Afghanistan reached to almost one hundred thousand in August 2010.

On June 23, 2011, President Barack Obama announced that all the 33,000 additional U.S. forces he ordered to Afghanistan in December 2009 will be home within 15 months.

In the Chicago Conference-2012, it was decided that a lot of foreign soldiers will withdraw Afghanistan by the end of 2014, the combat mission of NATO and America will end and the control of security affairs will be transmitted to Afghans.

Then, in 2013, after the Afghan President Hamid Karzai rejected to sign the Bilateral Security Agreement (BSA), the U.S. used the repeating announcement of withdrawal of its forces as a tool of political pressure; however, the series of the withdrawal of American forces slowly going on.

By the end of 2014, President Obama announced the end of the combat mission of American forces in Afghanistan; however, he said, at the invitation of the Afghan government, and to preserve the gains we have made together, the United States–along with our allies and partners–will maintain a limited military presence in Afghanistan to train, advise and assist Afghan forces and to conduct counterterrorism operations against the remnants of al Qaeda.

After Obama won the Presidential Elections in 2008, his policy until 2015 was to withdraw the entire American forces from Afghanistan by the end of 2016 and through this, he would become a President who ended two wars.

Barack Obama, considering the situation in the world, region and America and Afghanistan itself, changed its Soldiers’ Withdrawal Strategy twice in 2015 only. After he met President Ashraf Ghani in March 2015, he decelerated the withdrawal of American force from Afghanistan. According to previous plan, only 5500 soldiers out of 9800 soldiers were expected to be remaining in Afghanistan. WASHINGTON President Barack Obama on March 24, 2015 granted Afghan requests to slow the drawdown of U.S. troops from Afghanistan and said he would maintain a force of 9,800 through the end of 2015 while sticking to a 2017 exit plan.

After the Kunduz City seized by the Taliban and was under their control for two weeks, America changed its policy, also; Obama announced that U.S. forces will remain in Afghanistan at their current levels throughout much of 2016, yet another delay in their scheduled withdrawal and an acknowledgment that America’s longest war won’t be concluded on his watch.

Why Obama changed the Withdrawal Strategy?

The reasons behind why the US President changes his military policy in Afghanistan and brought changes in the Soldiers’ Withdrawal Strategy twice in one year are as following:

Emerging of the “Islamic State” group in Iraq and the issues of Ukraine and Syria caused the importance of Afghanistan to become decreased in the US foreign policy in 2014 and 2015; however, as the position of Russia empowered in Syria and Ukraine day by day and America still avoid itself from engaging in Iraq directly; so this new decision of Obama shows that the attention of America toward Afghanistan is increased.

The impacts of U.S. forces presence

Impacts of the continued presence of American Forces in Afghanistan are comprehensive; but its main impact would be increasing motivation for the government’s armed opposition in order to continue their war; the war would be continuing and the peace would not be maintained until other three years. Hence, the Taliban, in their declaration on remaining the American soldiers in Afghanistan, ordered their fighters to speed up their war. The lack of maintaining peace and security would have unexampled negative impacts on the Afghan economy in past one and a half decade. The war in Afghanistan has cost more than $9 billion in 2014 when most of international troops left the country, a study released on Monday said.

Besides that, if the American forces stay in Afghanistan, it is possible that Afghanistan would become the field of regional countries’ rivalries once again; in the case, the rivalry of Russia is increasing with America day by day and recently China, in a statement expressing its reaction on staying American forces in Afghanistan, said that the independence, territorial integrity and sovereignty of Afghanistan should be respected.