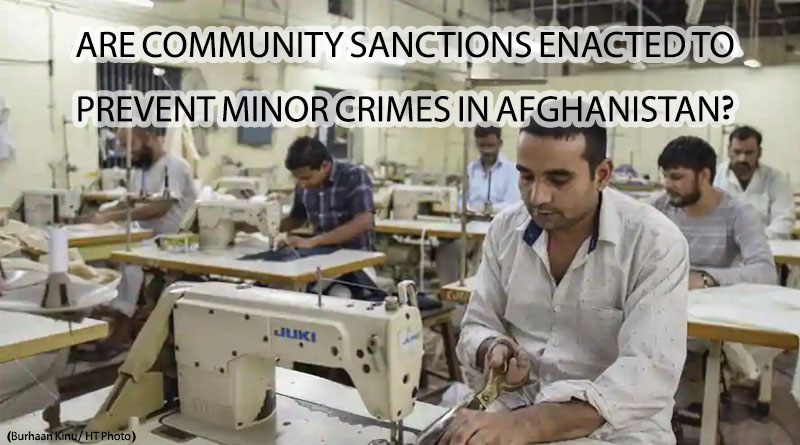 Among the Arab countries, Jordan has a comparatively better justice and legal system. In 2017, the country endorsed community sanctions in their justice system which was wrapped up in 2018. As a result of the new law, 333 people (307 men and 26 women) who committed minor offenses during the last 2 years were sentenced to perform community services instead of imprisonment. Basam Talhoni, Minister of Justice of Jordan has expressed to Aljazeera Network that their experience of the law was successful.  This is because, through the law, offenders are not only allowed to stay with their families and endure their penalty, but continue providing necessities for their families, which, otherwise, would have been a financial burden for the community and the government. On the other hand, the government has efficiently utilized their free services in public sector. Social activists and psychology experts also supports community sanctions and consider them particularly effective in penalizing elders, women, youngsters and sick people.

It is obvious that offenders should be punished and their punishment should eliminate their desire to commit crime the future. Punishment for major crimes such as muders, robbery, and others should be enforced according to laws of governments. However, imprisonment for minor offenses, especially imprisoning those who have no previous criminal records, can turn common offenders into notorious criminals, since the prisons are considered learning places for various crimes.

Jordan is not the only country which implements community sanctions, but many countries have experiences in this regard.

Community Sanctions as an Alternative for Imprisonment

In 2013, lawmakers of Iran realized that imprisoning minor criminals has more harms than benefits. Therefore, they sanctioned alternative penalties for minor offenses. The mitigation was not comprehensive, since those who had criminal record of one or more offenses of 6 months of imprisonment within the last 5 years will not benefit from the new alternative laws.

According to article 2 of the criminal law of Iran, free community service is divided into six categories:

These are alternatives for penalties. Their duration for various crimes differs and is specified in courts.

In this regard, Brazil has chosen another intriguing alternative which has improved lives and wellness of prisoners. In Brazil, inmates are allowed to spend their time on reading books, learning foreign languages, charging batteries and generating electricity, through which, they can get closer to their freedom.

Book reading has certain rules and regulations in prisons. Inmates are given 4 weeks to read a book and write its summary at the end. In case of success, 48 days of their prison time is reduced from their total duration of imprisonment. The law was sanctioned after the number of inmates in 1995 were 148 thousand and raised to 494,237 in 2010.

According to article 47 of the new law of Germany, imprisonment of less than 6 months is replaced with monetary penalty. That too requires certain eligibilities. Those who refuse to pay the specified fine, they are sentenced to 24-hour community service.

In addition, Netherlands also has an alternative for less than 6-month imprisonment. Instead of monetary penalty, offenders are sentenced to community services.

There are many other countries which have chosen alternatives for minor crimes. Such alternative also includes fine of 1/8 or ¼ of offenders’ income. Also, considering the type of crime committed, courts deprive offenders of some social rights such as participation in elections, inability to be hired in a governmental position and ban from travelling abroad.

Although countries have chosen various alternatives for imprisonment, but if only properly chosen and implemented, they can play role in crime reduction. Otherwise, there will be no effect on crime rate. Successful reforms can greatly effect a country since expenditures fall, minor offenders remain distant from notorious criminals and quality of community services are improved. However, countries where corruption, injustice, chaos and social disorder is common, such reforms may not be effective.

Is Enacting Alternative for Imprisonment Possible in Afghanistan?

Crime literally means sin, mistake and misdemeanor. It is a term used by lawmakers to denote an action which is penalized by the law security measures are undertaken for its prevention.

According to article 27 of the criminal law of Afghanistan, crime is “commission of refusal of an action that is considered as crime in the law, its elements are explicit, penalty is specified for its commitment and preventive security measures are taken”.

In addition, article 57 of the criminal law of Afghanistan defines “criminal” as “A criminal is person who has committed an action of crime individually, or in group”

According to Islamic criminal law, crime is defined as any behavior of performing and leaving an action that is penalized by the law. Jurists state that violation of laws of any country by external actions is considered crime when permissibility of action is not disclosed and is justified as punishable.

According to philosophers, crime is an anti-social action which is forbidden by people of community. In order to prevent its commission, government is given the right develop laws and punish those who commits. Overall, crime can be considered as a social phenomenon and various factors play role in its occurrence. Some key factors that causes crimes in our country include war, insecurity poverty, economic crisis, illiteracy, and deprivation from education.

The people of Afghanistan are facing numerous economic, social, security and political problems. These factors contribute to desires of committing crimes in the minds of youngsters and the new generation. Surely, prisons of Afghanistan are not good places to nurture offenders. Instead, it would have been preferred to find alternatives for minor crimes. However, considering current condition and capacity of law implementing bodies, it seems difficult to undertake such alternatives since such alternative can be misused in favor of the powerful and there is risk of poor management of implementation of alternatives.

The current criminal law has been reformed and allows monetary penalties instead of imprisonment, which to some extent, seem reasonable. However, until peace comes and security is maintained, it is difficult whether to include community sanction in the justice system or otherwise.

Preserving peace, security and social justice are key matters, under which, the government of Afghanistan can enact community sanctions and enable people start believing on the justice system of the country.