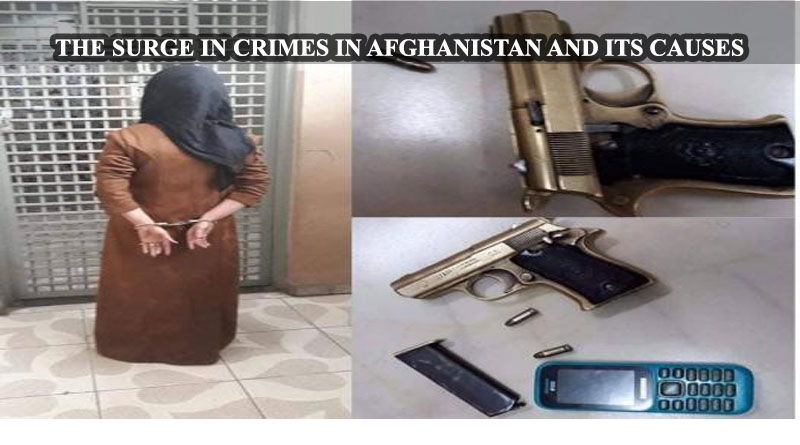 As the crime rate in the capital and some other provinces raised since a month, people are experiencing great terror. On the other hand, Masood Andrabi, Acting Minister of Interiors during his visit from zone 5 on 10th October, 2020, expressed that criminals should be taken down even in daylight and has ordered to shoot criminals upon site. Here, CSRS analyzes the causes of rise in criminal incidents in the capital and provinces.

Factors behind the Criminal Incidents in Afghanistan

Since the US attack in 2001, Afghans started to work with national and international organizations. As a result, economic activities increased and working opportunities were provided for Afghans. However, when such organization ceased their operations and economic activities fell, many Afghans faced unemployment and financial difficulties. Some people who were unable to efficiently manage their balance of savings and expenditures faced financial difficulties after losing their source of income. Hence, they started to obtain income from illegal means. In addition, after the attack of foreign forces, some Afghans got highly paid positions. Hence, they started spending on drugs such as wine, K-tablet, cocaine and weed which were not previously common in the country. According to statistics, more than 3 million of the population are drug addicts.

As the economy of Afghanistan highly depends on foreign aids and have remarkably reduced compared to the past, crime rates have also increased as its result. This is because people, in order carry on with their daily lives, are forced to commit crimes such as theft, abduction, murders and others.

Since year 2001, Criminal incidents have remarkably raised in Afghanistan. Abduction of foreign nationals between 2005 and 2008 increased tremendously, while 2014 and 2018 are years when crimes such as robberies, abductions, and murders were at its peak and are still in progress.

Among the various causes of criminal incidents, economic, political and security problems, inability to implement the laws and extensive corruption can be considered as the key roots of crimes in Afghanistan.

Lately, Kabul, which was previously considered secure compared to other provinces, has rising cases of theft of valuable possessions and mobile phones, and compulsions for cash. Although, people live in great fear, but security forces have been unable to bring any remarkable changes in the security condition of Kabul city. The citizens of Kabul consequently commenced a campaign on social media hash tagging (Kabul is not safe!). As a result, security officials were forced to assure the citizens of their endeavors for improvement of the security condition of Kabul.

According to the police headquarter of Kabul, 146 criminal incident have been reported within the last 20 days. In this regard, 133 individuals who have committed robberies, homicides, abductions, drug dealings, spoliations, and harassments have been arrested.

Masood Andrabi, acting minister of interiors during his visit of security posts at Kabul has expressed security forces to directly hand over criminals to the ministry or the police headquarter, so that they can be utilized to find key members of gangs.

How to Reduce Criminal Incidents?

According to the International Monetary Fund (IMF), Afghanistan was severely affected by the Covid-19 pandemic and had -5 economic growth. On the other hand, according to endorsements of the Brussels summit in 2014, international aids in military and non-military sectors will continue until the end of the year. It is expected that the summit will be conducted in November, 2020 in order to provide additional funds to Afghanistan.

As the Afghan government is under serious security threats by the Taliban, and on the other hand, it is striving to recover from poor economic crisis and struggling to attract foreign aids, increase in criminal incidents is further contributing to problems of the government. It is presumed that government officials are involved in the surge of crimes. Therefore, distrust between people and the government has reached to its peak and the public accuses security officials of having links with robbers and criminals.

On 14th July, 2020, due to requests of people, the government announced commencement of a project called “covenant of security” which was planned to improve security condition with cooperation of the public. However, it seems to have been just a statement and have not had any effective result. Lately, the chairman of the parliament also called the project as failure and requested additional positive changes.

If the Afghan government is truly willing to reduce crime rate, it should commence projects to improve the economic condition of the country. This is because the unemployment is correlated to the rise in crime rate. The government can present unemployment as the main subject to Brussels summit, so that foreign aids are attained in this regard.

In addition, the Afghan government can reduce criminal incidents by undertaking preventive measures against drug dealers. If not prevented, citizens of Kabul will face further obstacles in freely walking around the city. This is because the number of drug addicts rises day-to-day and the government has not undertaken any remarkable action against it. In order to obtain drugs, addicts use force to obtain valuable possessions from people, which as a result, they usually get injured or killed.

In order to prevent organized groups who operates to robs people and attains their valuable belongings by force, the government is required to start registration process of phone sim cards. This is because robbers can easily sell their stolen materials in the market.

Security establishments will be unable to preserve security until they attain support of the public. Distrust of the people on the security services and lack of their support has provided opportunities for individuals and groups to continue their criminal operations. The public is concerned that criminals are released by security establishments after being arrested for committing crimes. In order to gain trust of the people, the government should bring remarkable positive changes in security establishments and their staff. Transferring officials from one location to another is not only ineffective, but gives courage to criminals to shift their operations to other locations.

In addition, there some glitches in the penal code including lack of coordination between the police and prosecution establishments. When a criminal is arrested by the police, he/she is either released without penalty, or imprisoned for a short period of time. Such poor implementation of the law gives courage to criminals to increase their crimes. Those criminals that do not reach prosecutions has a whole different story.

Likewise, if the government does not step up to reduce criminal incidents, distrust of people will cause reduction in investments and enable Pakistan, which has recently facilitated investment opportunities for Afghans by extending Visa duration, to attract investments from Afghanistan. This can further deteriorate economic condition of the country.

In order to express accomplishments in crimes reduction, the government should severely punish key individuals behind the criminal activities. This will eliminate fear and enable citizens of Kabul and provinces to peacefully live their normal lives.