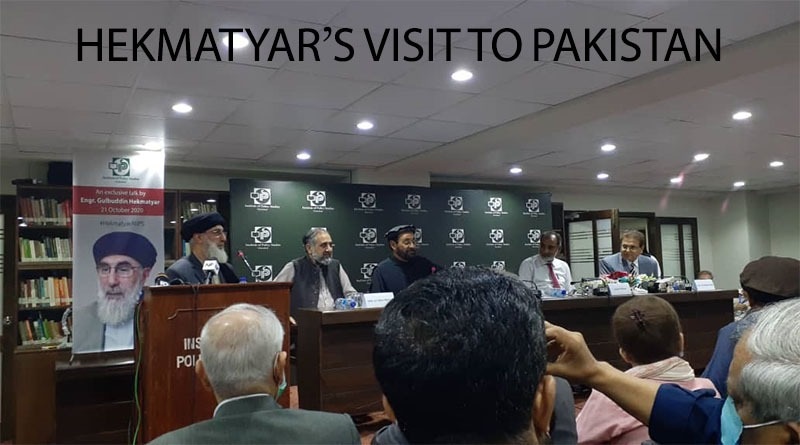 Lately, Afghan politicians have increased their visits to Pakistan after being officially invited by the country. On 18th October, 2020, Prime Minister Imran Khan invited Gulbudin Hekmatyar to have 3-day trip to his Pakistan. Three weeks ago, Abdullah Abdullah, Chairman of the high Council of National Reconciliation also had an official visit to Pakistan. Before inviting Political figures of Afghanistan, Pakistan invited officials of the Qatar office of the Taliban. Subsequently, Mullah abdul Ghani Beradar and other delegates visited Islamabad on 24th August, 2020. And even before that, Mohammad Muhaqiq and other political figures had visits to Islamabad after being officially invited by the country.

Here, we analyze the causes of increase in Afghan politicians’ visits to Pakistan and its effects on the Afghan peace.

According to Pakistani ambassador Mansoor Khan, Pakistan has chosen the policy of having constructive diplomatic relations with the Afghan government and Afghan politicians so that the intra-Afghan dialogue can succeed. In this regard, the government of Pakistan firstly invited Mulla Abdul Ghani Berader to visit Islamabad. Later, Abdullah Abdullah, Chairman of the High Council of National Reconciliation was officially invited to visit the country. Although a remarkable progress has not been witnessed in intra-Afghan dialogue, but Pakistan has promised the Afghan Taliban and Afghan government officials of their extensive support in bringing peace, expansion of trade relations and improvement in political ties.

Gulbadin Hekmatyar had close relations with Pakistan during the holy war against the Soviet Union back in Late 20th Century. However, his links with the country weakened and refuged to Iran during the Taliban’s administration. After the US invasion in December, 2001, He left Iran and started holy war against the US. During the Unity government in 2016, he signed a peace deal with the Afghan government and returned to Kabul after many years. On 18th October, 2020, he had a three-day visit to Pakistan, as he was officially invited by the country. During his visit, he met with Prime Minister Imran Khan, President Arif Alvi, Chairmen of the National Assembly and the senate, foreign minister Shah Mahmood Quraishi and some other political figures. Before his visit, ministry of foreign affairs of Pakistan proclaimed that ideas about the peace process will be exchanged and ways of strengthening relations between the people of both countries will be discussed with Hekmatyar.

Overall, visits of Afghan officials to Pakistan should be considered constructive.  This is because such visits can not only strengthen political relations with the country, but accelerate the peace process. During his visit, Mr. Hekmatyar had a talk at (Institute of Policy Studies, Islamabad) IPS on Afghan Peace.

Hekmatyar visit to Pakistan was criticized because he gave harsh statements about the Afghan government, India and Iran and accused them of contradicting the peace process. Conversely, an ambassador of peace should use respectful language in order for the success of peace negotiations. However, If Afghan politicians keep backing one of the two opposing countries and make accusations against the other, it will have no advantages except its harms of making the peace process more complex and will create further obstacles for peace.

Successive Visits to Pakistan and their Effects on the Peace Process

Visits of Afghan politicians to Pakistan indicate that Pakistan strive to attain the support of the future government of Afghanistan. And therefore, Pakistani government strive to denote that it can have constructive with both the Taliban and Afghan politicians. After Hekmatyar’s visit, Mir Rahman Rahmani Chairman of the Parliament was officially invited by Pakistan and visited the country along with 17 other delegates on 23rd October, 2020.

During the Pakistan-Afghanistan trade and investment forum 2020, Prime Minister Imran Khan expressed that there is a risk that India will strive to use the Afghan soil against Pakistan. Considering such statements, Pakistan may not be able to play role as expressed by Pakistani officials earlier. This might be because Pakistan has comparatively lesser influence over the Taliban. Therefore, by constructing relation with the Afghan government and politicians, Pakistan strive to pressure the Taliban and secure its interest after the success of the peace process.

On the other hand, Hekmatyar supports the idea of establishment of interim government. He believes that in order to enable ceasefire, establishment of interim government is necessary because the Taliban do not want to work with the current government. Meanwhile, the negotiating teams of the Taliban and the Afghan government are still discussing the structure of intra-Afghan dialogue which toke one and a half month. Excluding the Afghan government, Hekmatyar strives to unite political parties and commence separate negotiations with the Taliban, although it seems impossible but even in case of success, presence of national consensus will still be questionable. During the previous presidential elections, some politicians suggested the idea of establishing an interim government, but faded after the elections.

Some countries in the region such as Iran and India which supports the current government in Afghanistan strive sustain the government to complete its duration. However, Pakistan does not favor continuity of the current government. On the other hand, struggles of the US and Pakistan regarding the Afghan peace forced former president Hamid Karzai to give a statement about the peace process and said that any secret deals about peace is unacceptable for Afghans.

Currently, Afghan politicians should avoid giving any statement that turn the peace opportunity into the battleground of politics between India and Pakistan and harm the peace process.

Overall, visits of Afghan politicians to Pakistan and other neighboring countries can improve mutual cooperation and hasten the peace process. But to do so, regional competitions should be considered and securing national interests of Afghanistan and brining peace should be the main objective of all politicians.