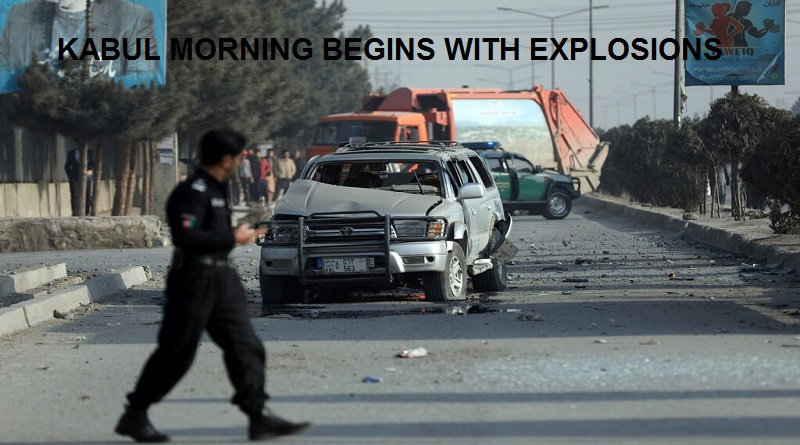 Since the last four months, almost every morning of the capital Kabul begins with one or several bomb blasts or terrorist events. In these explosions, compared to previous times, social leaders, civil activists, and journalists are mostly targeted. Along the series of these blasts, Jamiat-i-Islah leader Dr. Mohammad Atif was killed in an explosion on 2nd February, 2021 in Kabul, so far, no group has claimed the responsibility of this attack. The Afghan government condemned the attack on Dr.Mohammad Atif and blamed Taliban for the blast. However, Taliban’s spokesman Zabihullah Mujahid has strongly condemned the killing of Dr. Mohammad Atif and named such blasts an act of a vicious circle. On the contrary, the national security advisor Dr. Hamdullah Mohib went to the central office of Jamiat-i-Islah in order to extend his solidarity with regards to the loss of Dr. Mohammad Atif and he called the attack on Dr. Atif a work of the enemies of the country. He also promised to find the perpetrators of this incident and bring them to justice.

In this context of CSRS, we have analyzed the issue that why such blasts are targeting social activists and other key national personalities.

A Glance to the Last Explosions:

Based on Doha agreement (Feb-29), the intra-afghan peace talks began in September 2020 after months of delay. And since the last four months, the capital city Kabul has been witnessing of one or several explosions almost every morning compared to other provinces. The number of such blasts has tripled in 2020 compared to the previous year (2019) and has been mostly targeting social activists and journalists. In such a critical phase of the intra-afghans talks, the intensification of violence and explosions have made the general public so anxious that the in-hand opportunity for peace will be lost for the personal interests of particular parties.  Further, some of the civil activists and journalists have been forced to leave the country as a result of late insecurities and for the purpose of securing their lives as within the previous several months, six journalists (Yama Seyawash, Elias Daee, Malala Maiwand, Fardin Amini, Rahmatullah Nikzad and Besmillah Qarlaq) have been killed in explosions[1].

In addition to this, other social personalities who were particularly working for a sustainable and long-lasting peace in the country, have been targeted from unknown groups whose sole aim is to sabotage the ongoing peace process. Rather than Dr. Mohammad Atif, Dr. Abdul Baqi Amin, Wahid Muzhda, and Mohammad Ayaz Niazai are other victims of such blasts that we can name here.

Who Was Dr. Mohammad Atif? Dr. Mohammad Atif was a scientific and academic figure who was born in Bangi region of Takhar province. He did his higher education (master degree in comparative religion) during migration time in Peshawar University and he was lecturing in several universities of the Afghan migrants.  He was head of Jamiat-i-Islah for six years and few years back he was a head of Salam University in Kunduz branch. As per the saying of the national personalities of the country, Jamiat-i-Islah has been a very disciplined, organized and committed national movement across the country and Dr. Mohammad Atif was a director of the central council of such a national movement for three years.

Dr. Mohammad Atif was killed while he was striving for reaching the aforementioned wishes and therefore his funeral ceremony was held in such a magnificent way in capital city Kabul where thousands of people participated in a very disciplined and effective manner.

Besides Afghanistan, the world political, academic, religious and other social personalities have called the killing of Dr. Mohammad Atif a great felony and tragedy not merely for Afghanistan for the entire Islamic world.

The large turnout at the funeral of the Dr. Mohammad Atif showed that he was at the forefront of a movement that has deep roots in the Afghan society and which sole purpose is to truly serve the country. Due to this, the assassination of Dr. Mohammad Atif was widely condemned on social media. Government and national figures stressed that following his footstep and ideology is essential in order to fulfill his dreams and aspirations.

Dr. Atif’s Fateha Ceremony was held for three days at Jamiat Eslah Afghanistan’s Head Office which was attended by Dr Abdullah Abdullah the Chairman of the High Council for National Reconciliation, Hamdullah Mohib the National Security Adviser, Fazal Hadi Muslimyar the head of the Meshrano Jirga, former figures of Tehrik-i-Taliban and other political and national figures.

Unfortunately, in this series of targeted killings, a national figure like Dr. Atif was also killed, He was actively involved in peace, education and other charitable activities, the man who was traveling all over the country without any guards or armored vehicles just to fulfill his dream of reconstruction of country, everlasting peace and provision of proper education of the young generation.

Targeted Killings as a Tool of Sabotaging Peace Process

According to the Doha agreement, the Taliban and the Afghan government should proceed with Intra-Afghan talks. However, so far there has been no significant improvement except an agreement on the procedure in December of the last year. On the other hand, after the Doha agreement, the fighting has been intensified targeting only Afghan lives in both sides. The demands for ceasefires and the formation of an interim government were also brought forwarded in the end of first round of Intra-Afghan peace negotiation, since Taliban representatives have started visits to Russia and other regional countries Afghan government blamed Taliban for not resuming peace talk despite a week of waiting. The urge for ceasefire and an interim government provably are two obstacles that abstains both sides from negotiation table.

It is because that Sher Mohammad Abbas Stanekzai, assistant head of Taliban’s Qatar office, told a press conference in Moscow that they were ready to make peace with the government if Ghani resigned but Afghan government still pushing Taliban for ceasefire and considers election as the only legitimate way of power transitions.

Meanwhile, in the wake of the indefinite delay in intra-Afghan negotiation, officials in the new US administration led by Joe Biden has announced a review of Afghan peace deal with the Taliban with the help of the Afghan government.

According to Afghanistan Study Group, if the troops pull-out now, the situation may worsen. Some other US officials have also stated that the withdrawal of troops based on careful examination of situation will not only help in bring peace to Afghanistan but also help secure US interests in the region.

In such condition where Taliban urge for the removal of President Mohammad Ashraf Ghani from power, Afghan government is pushing Taliban for ceasefire before any improvement in peace talk and the United States is talking about reviewing the Doha agreement, Intra-Afghan peace talk may face serious obstacles.

In such a unique opportunity for peace, targeted killings not only create more mistrust between both sides, but could also rationalize the presence of foreign forces in the country. At the same time, the Taliban have threatened to launch a full-scale war against foreign troop if they refuse to leave which could only lead to the prolongation or collapse of the peace process. Such uncertainties and critical situations raised concerns among public about the future than ever before.

Targeted killings cannot be eradicated by considering as serious crime or condemnation, it is important that social and national figures, civil society activists and political parties unite against targeted killings.

The Afghan government and the Taliban, who condemn the current targeted killings and do not take responsibility of them should take necessary measures to expose those who carry out these targeted killings.

In Dr. Atif’s funeral, thousand people urged from both sides to work hard for peace and accused the Afghan government for failure in their responsivity to provide security for nation. People gathered in Dr. Atif’s funeral asked for justice for Atif’s assassination, end of target and series of high-profile killings and immediate peace in the country.

If targeted killings continues, the prospect of further delays in inter-Afghan talks is inevitable and that will only benefits those who want to sabotage the ongoing peace process.

The Islamic countries and especially the Organization of Islamic Cooperation and the international community must put pressure on all parties involved in war to stop the targeted and series killings and end ongoing crisis in Afghanistan in such that Afghan people start their morning without any explosions.