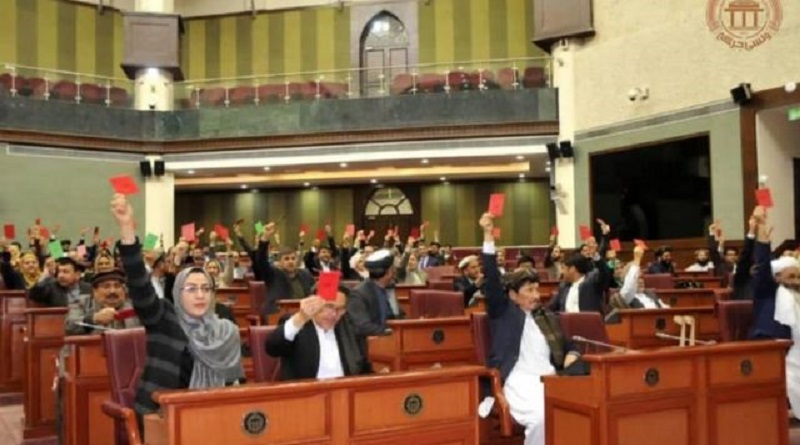 Reasons for Rejection of the Budget

The parliament rejects the budget because of the following 17 reasons[1]:

The parliament rejected the budget draft and have proclaimed that if the ministry of finance does not reform the budget before sending it to the parliament, they will reject it again[2].

The total budget of Afghanistan for the 2021 fiscal year is forecasted at 473 billion AFN, of which, more than 311 billion AFN allocated as the normal budget and 161 billion AFN is allocated as the expansionary budget. In addition, the national food program (that will cost $244 million of which $160 million is spent) has been removed from the third national budget draft. However, implementation of the second part of the program is emphasized in another part of the draft[3].

In the third budget draft, more than three billion AFN is deducted from the capacity building projects and budget counting entities from code 22. Yet the here is no reduction in total budget. Another part of the draft discusses settlement of new employees’ rights, for which, a new code with 16 billion AFN has been created.

Similar to the second draft, the third draft also forecasts a budget deficit of 37 billion AFN and demands a 17 billion AFN debt form the IMF[4].

On 23rd January 2021, the presidential palace issued a decree dismissing Mr. Abdul Hadi Arghandiwal from the ministry of finance. In another decree, Mr. Mohammad Khalid Payanda was introduced as the acting finance minister. Dismissal of the finance minister in a situation where the 2021 budget is rejected by the parliament twice, and the differences between the government and the parliament over the approval of budget are high, is questionable. The presidential palace states that the reason for his dismissal was delay in income collections, lack of cooperation with the joint review committee for illegal appointments and preventing it, weak management, and lack of good governance[5]. However, on 25th January 2021, in a press conference Mr. Arghandiwal rejected these accusations and stated that a circle in presidential palace was interfering in his affairs and when he tied to close their profitable windows, they created problems for him. He said he asked the president to be in touch with him directly, not through people who are seeking their personal interests in Afghanistan and if they have no personal interests, they will leave the country that moment. But he did not mention names in this regard. Mr. Arghandiwal said the other reason for his dismissal was his attendance in national procurement commission where he criticized the contract of 18 types of meat for the chief of staff office and the oil contract in which oil was bought for 41 AFN per liter while the market price is only 36 AFN. The issue of 17 types of meat and a $17 million vegetables expenses of the chief of staff office became controversial after a parliament member unveiled it[6].

National budget plays a vital role in the economy of every country. It covers yearly expenses of a government. Thus, the government is very considerate when it comes to budget planning and its sources.

At the start of each financial year, operations of the government and its relative bodies also commence. If the government does not have sufficient budget for its operations, it will face various problems and obstacles. The current National budget is an initiative for the development of the country. If relative bodies are not provided with the budget on time, they will face various challenges. However, as the parliament also emphasis, it is vital for the budget to be well-balanced. Otherwise, it will further contribute to instability of the economy of Afghanistan.

Afghanistan is currently in a very complicated situation due to various challenges. Therefore, we cannot predict its future. If the peace process succeeds, it will truly change the situation of Afghanistan. For a change, new and effective sanctions and decision are required. Presently, rejection of the national budget will have negative effect on the economy.

However, if the peace process does not succeed or faces deadlock, the current condition will persist and delay in budget sanction will further contribute to the problems of the government and people. The budget plan should clearly state salaries balance, volume of investments, and characteristics and purpose of development plans. In addition, the government should consider all parts including, governmental bodies, consumers, producers, operations and other. This is because the whole budget determines the future of economy the country.

Ustad Hamidullah Hanif, representative of the people of Hirat in the Parliament has express and emphasized that the budget should be in accordance with national interests. The budget plan should focus more on infrastructure and should contribute to poverty reduction in upcoming years. In addition, he has talked about his concerns about corruption lack of balance in salaries of government employees. While defending the parliament’s stand about the budget, he has said “consideration of balanced salary scales of lower-ranking employees, soldiers and teachers is a key goal of the parliament here, and we will not allow unnecessary expenditures allocated in the budget”.

While the stand of the parliament is appreciated, rejection of the budget plan for the third time, emphasize on reforms and disagreement between the parliament and the Presidential palace should not cause obstacles especially for those projects which are directly beneficial for the people. However, it is necessary to know that disproval of the budget will cause delays in salary payments of government’s staff and the authorities has the right to continue its operation according to the budget of previous year. But unfortunately, the government, in order to pressure the parliament, has started to undertake measures, including refusal to pay salaries of staff. We are hopeful that disagreement between the presidential palace and the parliament will end in favor of people, so that the people are sheltered from the effects of absence of the national budget and any fall in the economy is avoided.