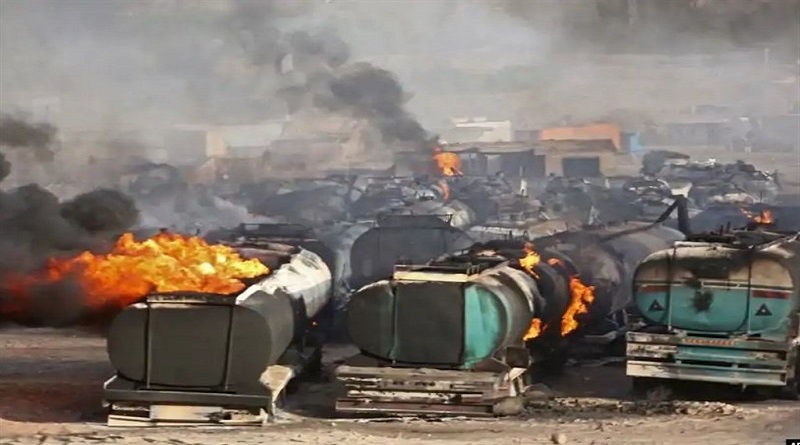 On 13th February, 2021, a fuel tanker exploded in Islam Qala port near Iran-Afghanistan border which converted into a massive fire catastrophe. The fire burned down around 500 fuel vehicles, causing millions dollar losses. The fire persisted for several hours and elicited physical and financial losses to the people. According to officials, 17 people were injured during the fire incident. In order to extinguish fire, the neighboring country Iran also extended its support via air and land. The local authorities of Herat province during the first stages of fire proclaimed that they did not have sufficient facilities within the province to extinguish the fire. Islam Qala port is located 120 KM away in west of Herat city and is considered as the main transit way between Iran and Afghanistan.

Magnitude of the Incident

According the Afghanistan’s Chamber of Commerce, losses to merchants are far higher than it was reported at the first stages. Khan Jan Alokozai, member of the chamber has expressed that hundreds of million worth properties of traders, including 1000 vehicles have been destroyed during the Islam Qala port incident. During a press conference on 18th February 2021, Mr. Alokozai stated that the fire incident has caused 25% rise in prices of combustible goods all over the country. In addition, private sector has faced unconceivable losses due to the incident.

Local authorities during the first stages of the fire expressed that they do not have enough facilities to extinguish the fire, therefore, requested Iran for Help.

Younus Qazi Zada, Director of Afghanistan Chamber of Commerce and Investment has stated that the incident of Herat can be called as a “Tsunami” for traders. He has claimed that the government does not take the issue serious and will know about its devastating effects in the next few months. He also expressed that people who lost their properties and vehicles in the fire have struggled for years to attain that wealth.

Causes of the Fire

Directorate of Chamber of Commerce and investment has declared via a report that the following were the main causes of the incident:

Younus Qazi Zada, Director of Chamber of Commerce and investment says “the main problem was ministry of transport’s new procedure, due to which, tankers or trucks are forced to wait in the custom for two weeks.

Damages Caused by the Fire

According to the spokesman of the directorate of Public health of Herat province, 17 people have been wounded due to the incident. Officials of the chamber of commerce and industries and the Islam Qala port have declared that around 500 tankers of fuel and gas have been grisly devastated. Preliminary investigations have indicated the incident caused 500 million USD worth loss to traders. Among the destroyed tankers, 90 tankers have completely vanished due to intensity of the explosion. Also, 435 vehicles, have partially been damaged. Comprehensive information about the losses requires further investigation.

In addition to the destruction cause by the fire, some properties and goods of merchants were looted within the Islam Qala custom and on the way towards Herat city by unknown individuals. Some vehicles have disappeared along with their goods and the unknown individuals who have stolen the vehicles request money from traders in exchange for their vehicles and goods.

In brief, we can say that around 500 vehicles were destroyed by the incident and hundreds of others were affected by different causes.

During his visit from the area of incident, Abdul Wahid Qatali, Governor of Herat expressed his grief and said “Heavy losses have been caused to the private sector and governmental establishments. Among the recovered vehicles, 1500 were transited to the neighboring country, 500 were secured near border and 400 were moved to Heart city”.

The blaze led to heavy costs to the private sector, public sector, the people and the market. Due to the fire incident of Herat and strike of transport agencies all over the country, prices of combustible goods have dramatically increased all over the country.

On 16th February, 2021, the Associated Press Agency shared some satellite images of the incident, showing hundreds of burned tankers of fuel and gas which has turned the land dark.

As usual, hundreds of fuel-carrying vehicles were in a queue to complete their relative affairs in the custom. At that day, 2500 vehicles were parked in the area, while the custom has parking capability of only 700 tankers.

Representatives of the private sector have proclaimed their requests from relative ministries and claimed for restitution for their losses.

Investigation Delegate of the Parliament

Members of the delegation appointed by the parliament and chamber of commerce have travelled to Herat province in order to find the truth behind the incident. During a press conference, they have expressed it is not far from possible that the incident was premeditated. The incident is still being investigated. Lately, reports say that 9 employees of the Islam Qala custom have been arrested for the incident.

Considering the Isam Qala fire incident, other customs clearly need to take preventive measure in order to avoid similar incidents. The latest incident has occurred due to lack of firefighting facilities and inconsideration of sufficient space between fuel tankers, which resulted in heavy costs to the Afghan and Iranian traders.

Hopefully, the relative establishments will learn from the catastrophic event that affected the economy and investor by providing more attention to deliver better services at customs. This is due to the fact that trade and investment are the key factors for the economic development of the country. Private sector which can be considered as the main dynamic element of the economy was severely affected due to the incident. It is nearly impossible for the investors and traders to recover from the incident all by themselves. Therefore, after a precise evaluation of the losses, relative traders should be compensated. This will enable private sector to pursue their business operations in the country and keep them attached to the economy of their country.

In addition, a risk evaluation committee should be appointed in order to investigate and evaluate the current condition of customs. They should report back to the president so that effective measures are taken for reforms.

The horrific fire incident of Islam Qala will truly have negative impact on business people, unemployment, and the economy of people. However, as it is well-known fact that extensive corruption in governmental bodies has not only lead to sluggish performance, but has led to occurrences like the incident of Islam Qala.

Therefore, in order to prevent similar incidents, corruption should be eliminated and people should be appointed according to qualification and talent.