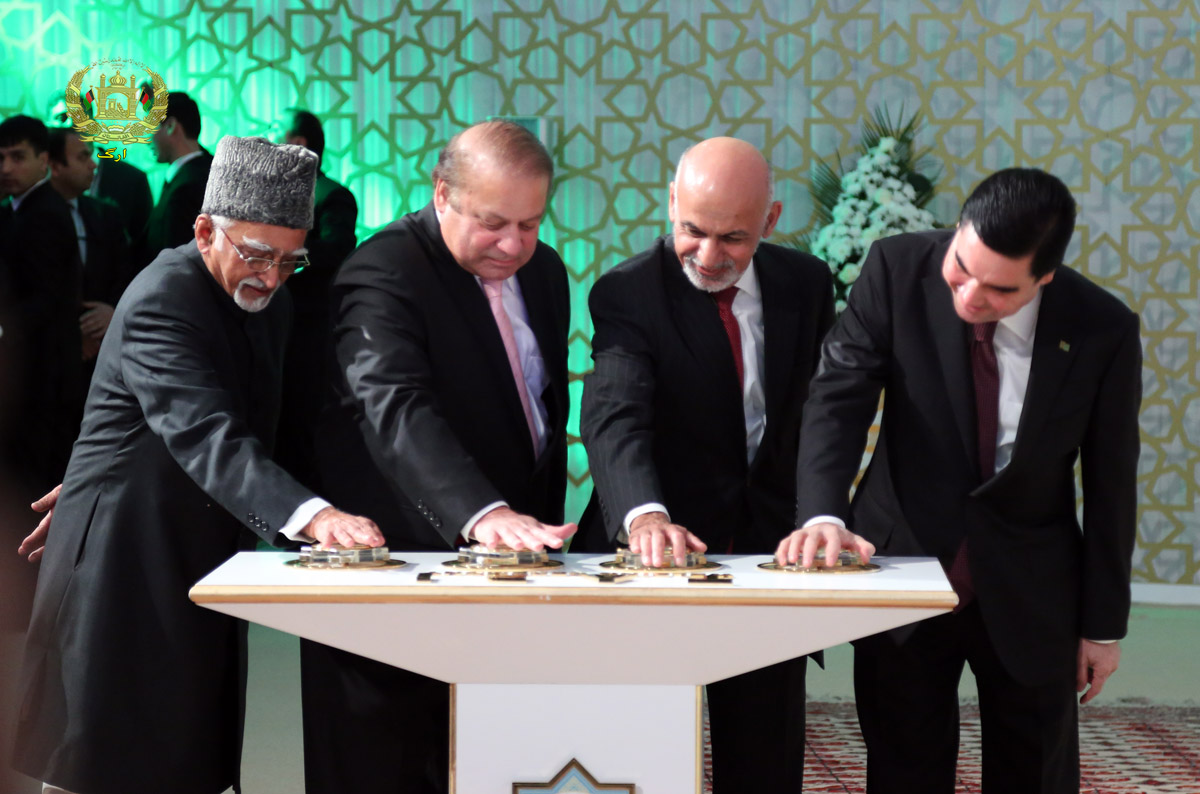 This pipeline project is designed to transport 33 billion cubic meters of gas annually for a period of three decades to Afghanistan, Pakistan and India.

The intergovernmental agreement on the pipeline was signed by senior officials from Turkmenistan, Afghanistan, Pakistan and India on 11 December 2010 in Ashqabat and the work of its survey ended in 2014.

Background of the TAPI project

The roots of this project lie in the involvement of international oil companies at the beginning of 1990s. At the beginning, Argentinian company Bridas Corporation and American company Unocal were competitors. Turkmenistan was hoping that this project would be implemented after security was provided in Afghanistan. Supporters of a conspiracy theory also consider the fall of Mujahedeen Government leaded by Prof. Rabbani and emergence of the Taliban movement in Afghanistan linked with this project. Taliban’s attempts for starting this project faced with obstacles, like presence of Osama Bin Laden in Afghanistan and etc., by the United States and became delayed, then.

With American attacks on Afghanistan and the fall of the Taliban, America, in Afghanistan, provided power to those people, including President Karzai, who were former employees of Unocal. Specifically, Zalmai Khalilzad, who had also worked as a senior advisor to Unocal, had a major role in these appointments. Once again, rumors on transporting Turkmenistan’s gas to South Asia through Afghanistan were being heard in which American companies would have important role, however, America’s war against so-called “terrorism” caused further insecurity in Afghanistan and the daily expansion of these insecurities caused the TAPI project to become stall.

The most important reason behind the postponement in construction of this project was insecurity. After 2001, a wave of insecurities in Baluchistan province came to the ground and the Pakistani government launched several military operations in this area, then; Akbar Bukti, the leader of Baluches became killed as a result of one of these operations, also. On the other hand, insecurities in Southern Afghanistan, specifically in the areas that the TAPI pipeline was passing through, increased after 2004 and 2005. In Addition to insecurity, disagreement over the sales prices and transit fees of the TAPI gas pipeline had main role in the postponement of this project. Despite these factors, the regional rivalries also played a role in delaying the TAPI project.

Since the early 90s, Iran made great efforts by providing high incentives to Pakistan and India to dissuade them to agree to the “TAPI” project and to choose the route of Iran, instead; however, these efforts were not successful. Two well-known American companies were interested in succeeding the TAPI gas project and removal of Afghanistan from and integration of Iran to this project could be considered as a setback to American energy interests in the region; Afghanistan and America did not let the route of TAPI to become change and Afghanistan to be removed from this economic project.

Although, Pakistan and India desperately need energy, but the rivalry between the two countries was also effective in delaying this project. Pakistan wanted to prevent close ties between Afghanistan and India; therefore, it was willing to enter Tehran instead of Kabul to this circle and for TAPI to be turned into TIPI (Turkmenistan-Iran-Pakistan-India). In this case, the gas pipeline from Turkmenistan was passing through Iran’s eastern provinces, and then, it was entering to Quetta, the Capital of Baluchistan province. By all accounts, the deformation of the Turkmenistan-Afghanistan-Pakistan-India project to Turkmenistan-Iran-Pakistan-India project was becoming something that Tehran was so interested in. Removal of Afghanistan from this route could put Pakistan in a better position to put pressure on India, then.

Iran also tried to sign a separate contract and transfer its gas through another pipeline named Iran-Pakistan-India (IPI) to Pakistan and India. However, this project was postponed due to American economic sanctions against Iran.

Any country that is on the route of the pipelines of gas and oil will gain strategic importance for having control on a part of the transit of energy and even it will affect the fate of the world, also. As each passing day, the division of power in the world is influenced by energy and its transmission routes that are in change, and Afghanistan, as a path between energy producing countries on a hand, and on the other hand, are countries in need of these resources will gain special importance not only in the region but also in the world.

Insecurity in Afghanistan is a major problem toward this project, because a large part of this pipeline passes through the areas that are under control or influence of the Taliban, and if they wish, this project will not be implemented. For this reason, the representatives of the Taliban were taken in confidence in the entire stages of the TAPI negotiations. As the project will create job opportunities for tens of thousands of Afghans and it is considered as an important national project, so the Taliban will have soft and different approach to this project compare to other projects. Besides that, the Taliban will be afraid of that if this project was not implemented due to their prohibition, their “soft power” would be hurt badly.

In the latest round of talks, representative of the Taliban’s political office in Qatar traveled to Turkmenistan and met Turkmen officials. Last year, a spokesman for the Taliban, after the survey of this project was completed, said that the Taliban has agreed to refrain from attacking this project. The Afghan security officials said that they are going to establish a task force to provide security for the project, however, in the circumstances that war is spread to a large part of Afghanistan and the government is faced with the problem of handling districts and now and then some districts fall into Taliban’s hand, providing security for the construction of 735 km pipeline will require tens of thousands of troops that the government of Afghanistan cannot afford it. Hence, the TAPI project will have extraordinary benefits for the Taliban both in the financial sector and their prestige on the international level.

But other than security challenges, lack of good governance in Afghanistan and presence of widespread corruption in this country could be considered as an obstacle in front of implementation of this project. These conditions caused tens of billions dollar of the international community to Afghanistan in the past fourteen years not to be used optimally.

It starts from the Galkynysh gas field. In Afghanistan, TAPI pipeline will be constructed alongside the Kandahar–Heart Highway in western Afghanistan, and then via Quetta and Multan in Pakistan. The final destination of the pipeline will be the Indian town of Fazilka, near the border between Pakistan and India. This route has faced insecurity not only in Afghanistan but it also in Pakistan. Baluch separatists have been active in this area that sometimes the Pakistan, itself, does sabotage operations on the pipeline of gas. Pakistan has also promised to secure the route.

Benefits of the TAPI project for Afghanistan

Afghanistan’s location as a bridge between Central Asia and South Asia becomes prominent with this project. This project can be considered as a test in the current situation that if it is succeeded, it will be followed by other big projects that will change Afghanistan completely in the next 20 years.

The annual benefit of this project after the deposit of the operation would be approximately $500 million for Afghanistan; but also before exploitation, this project, directly or indirectly, will provide employment opportunities for about 50 thousand Afghan workers. Rise in incomes causes mobility in the Afghan economy and it leads to indirect positive effects on the overall economy of Afghanistan.

This project will enhance the role of Afghanistan in the regional economic balances as a strategic partner to this region from one hand, and from the other, for controlling the most important gas pipeline in Asia. The US wants the income of this pipeline to reduce the dependence of Afghanistan on American assistance.

Although, the main purpose of the TAPI project is transferring gas from Turkmenistan to Pakistan and India, but according to the contract, Afghanistan can also get use of this gas in provinces that the pipeline of gas is passing through. On the other hand, if Afghanistan became able to extract the gas from its own resources, it will be possible for it to transfer its own gas to Pakistan and India through this pipeline or puts its gas at one point in this pipeline and at another point, utilize it for internal usage within the country.

One of the major achievements of this project, if succeeded, could bring peace and stability especially in the areas where the pipeline is passing through. This route could be called “Peace Route” and this route, in the areas located alongside it, can provide opportunities that would cause peace negotiations to take place between the government and the armed opposition without the interference of the foreigners.

This project, through economic cooperation, can change the course of the proxy war between the regional counties in Afghanistan and it can empower regional integration, also. Economic interests tied by the project will help peace and stability in Afghanistan and it will cause the peaceful treatment of the Afghan crisis to be put in the priorities of the regional countries. So, it is not pointless that this pipeline is named “The Pipeline of Peace”.