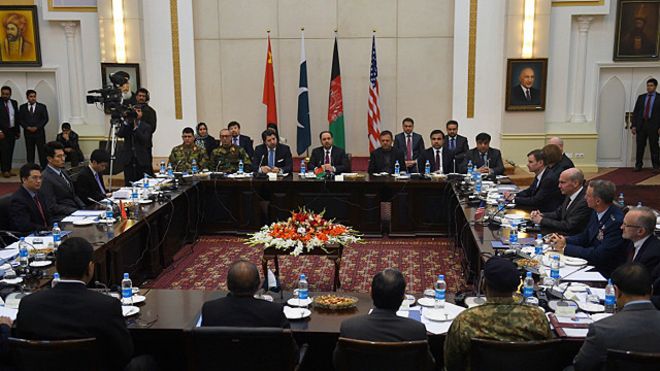 The fourth quadrilateral meeting was convened in Kabul. According to the joint press release of this meeting, the face-to-face talks with the Taliban will commence in the first week of March in Islamabad.

Prior to this, in the third meeting, the Quadrilateral Coordination Group (QCG) had decided to start direct talks between the Afghan government and the Taliban at the end of February; however, it is not yet clear why these talks have not started while the month is almost ended.

Recent decisions about direct talks come at a time when the Pakistani Chief of Army Staff, General Raheel Sharif talked about the Afghan peace process with senior Qatari officials during his one day visit to Qatar which took place two days before the fourth quadrilateral talks.

The background and importance of direct talks with the Taliban, and the possibility of holding these talks in March are the issues that will be analyzed here.

Significance of direct talks in the Afghan peace process

Whether there were conflicts between foreigners and the internal parties, or internal forces that were involved in armed conflict with each other; the conflicts were being resolved through face to face talks almost in every country; thus, one can conclude that only direct talks would put an end to conflicts. For instance, the “Paris Peace Agreement” which was made between the governments of the Northern Vietnam and Southern Vietnam, the U.S and Provisional Revolutionary Government of Vietnam brought the “Vietnam War” to an end.

It goes the same way in Afghanistan, the entire peace efforts that have not contained direct talks were either fruitless or had negative consequences. During the Soviet invasion of Afghanistan, the Geneva Conference was convened, but due to the lack of direct talks with the real sides of the war, it had unwanted outcomes and became one of the factors behind the “Afghan Civil War”.

The direct talks will also make the country to get even closer to security, peace and prosperity. However, it is important that these talks should take place with the real parties of the war and it should not be due to the pressure.

The background of direct peace talks

The face to face talks between the Afghan government and the Taliban first happened during Hamid Karzai era and were mostly carried out with the Taliban individually; Mullah Baradar, Mullah Motasim Agha Jan and some other Taliban were among them.

After the Murree talks came to a halt and the regional and international efforts for Afghan peace process began, Quadrilateral peace talks commenced in December 2015, and its fourth meeting was recently held in Kabul. In the first and second meeting of this series the four countries decided about the procedure of the quadrilateral meetings and in the third meeting they discussed over the “road map” for talks between the Afghan government and the Taliban and in its fourth meeting they determined to commence direct talks with the Taliban in the first week of March in Islamabad.

Considering the realities on the ground, the obstacles to face to face talks with the Taliban through the quadrilateral meetings are as follows:

After the fourth meeting of the Quadrilateral Coordination Group, the Afghan Taliban’s political office in Qatar declared that they were neither informed about quadrilateral meetings and direct talks, nor were they contacted in this regard.

If one study the Taliban’s diplomacy in the past years, one will find that declaring difficult positions the Taliban either are not prepared for the talks or they wanted to talk directly, as in the cases of releasing the Russian pilot and the American soldier, Bowe Bergdahl.